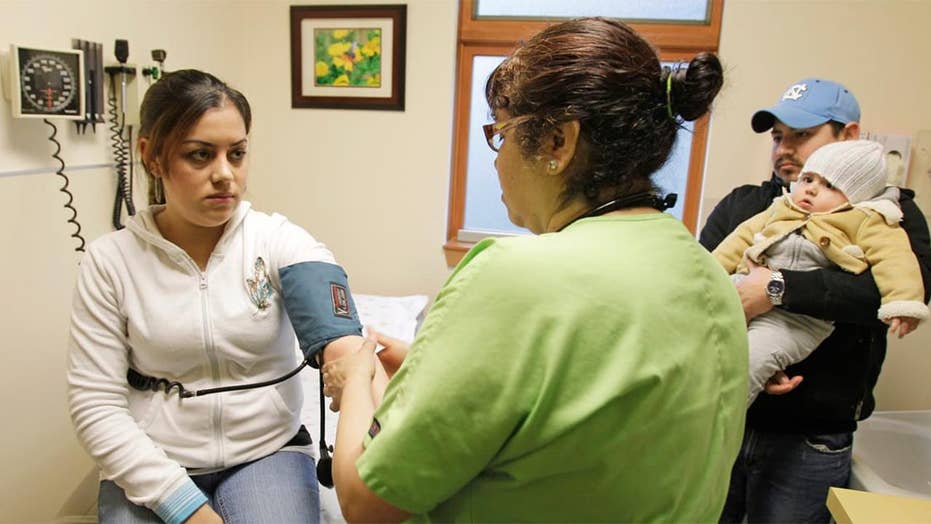 Health care remains top of mind for many voters

A major factor working in favor of Democrats this election season is the public's concern over health care and its growing approval of Obamacare; Doug McKelway reports.

Democrats on the midterm-campaign trail have trotted out their fabrications about Republicans demolishing medical coverage.

U.S. Representative Elijah Cummings of Maryland denounced “Republicans’ assault on health care.” Texas senatorial candidate Robert Francis O’Rourke claims that his GOP opponent, Ted Cruz, “has voted to take away health care from millions of American families … and he shut down the government for 16 days because he thought too many people had too much health care.” Democrats echo such lies through an incalculable number of commercials, robocalls, and door-knocks.

However, the good news about Republicans and health care may be the midterms’ biggest secret.

While ObamaCare has been neither repealed nor replaced, it is being superseded. As President Donald Trump said, “We will deliver relief to American workers, families, and small businesses, who right now are being crushed by Obamacare, by increasing freedom, choice, and opportunity for the American people.”

The total number of Americans with health insurance rose from 292.3 million in 2016 to 294.6 million in 2017, the Census Bureau reports. Some of the following new reforms have helped 2.3 million more Americans enjoy medical coverage and alternatives under Republican leadership rather than Democrat mismanagement.

- Republicans last December “ended the unfair individual-mandate penalty” under Obamacare, President Trump observed. “People are paying a lot of money for the privilege of not paying a lot of money for bad health care. And we’ve ended it.” Every single Democrat in Congress opposed individual-mandate repeal, which was part of the Tax Cuts and Jobs Act.

- Trump signed legislation in February to repeal the Independent Payments Advisory Board, also known as the “Death Panel,” that would have rationed Obamacare. IPAB is dead and threatens no one.

- As promised, Trump signed the Right to Try Act on May 30. Terminally ill Americans who have exhausted other options now are free to use drugs that have passed the FDA’s Phase 1 safety trials but not yet passed effectiveness tests. The FDA’s “compassionate use” program only helped some 1,200 patients annually, the White House estimates. It added: “‘Right to Try’ gives the over 1 million Americans who die from a terminal illness every year a new tool to fight and make potentially lifesaving decisions about their treatment.”

“People who are terminally ill should not have to go from country to country to seek a cure,” Trump said. “I want to give them a chance right here at home.”

The U.S. House’s roll call on this measure showed the parties’ true colors.

All 228 Republicans present voted for the Right to Try on May 22. But only 22 Democrats voted yes. The other 169 voted to deprive terminally ill Americans of the experimental drugs that might keep them alive. California’s Nancy Pelosi and Maxine Waters, Maryland’s Steny Hoyer, and New York’s Jerrold Nadler were among the pharmo-totalitarians who did not let even these imminent deaths tame their lust to control others.

- The Trump administration in June authorized “association health plans.” Entrepreneurs, small employers, and civic organizations (e.g., the Las Vegas Metro Chamber of Commerce and the Small Business Association of Michigan) now may join hands and insure their employees and members, including across state lines.

- Last summer, the administration extended the duration of short-term, limited health plans from three months to one year, with renewals permitted up to three years. In essence, Team Trump increased twelve-fold the allowable length of short-term policies. “For example, according to E-Health, the average lowest premium for an Obamacare plan for a 40-year-old woman is about $4,200 per year,” Trump noted. “By contrast, the average lowest premium for short-term coverage for this individual is about $1,300 a year — a savings of $3,000,” or 69 percent off.

These plans are cheaper because they lack many of ObamaCare’s costly, needless, and foolish mandates. Every Obamacare plan *must* include pediatric vision coverage — even if the policy holder is childless, sterile, and mortally terrified of small, screaming objects.

The GOP’s cost-cutting, liberty-expanding dynamic contrasts vividly with the Democrats’ cruel, truncheon-wielding approach. As Health Secretary Alex Azar wrote in the Washington Post on August 15: “Such plans were offered for terms of up to 12 months for decades until, in an effort to push Americans into Obamacare, the previous administration restricted the plans to 90 days and prohibited insurers from renewing them beyond that time period.”