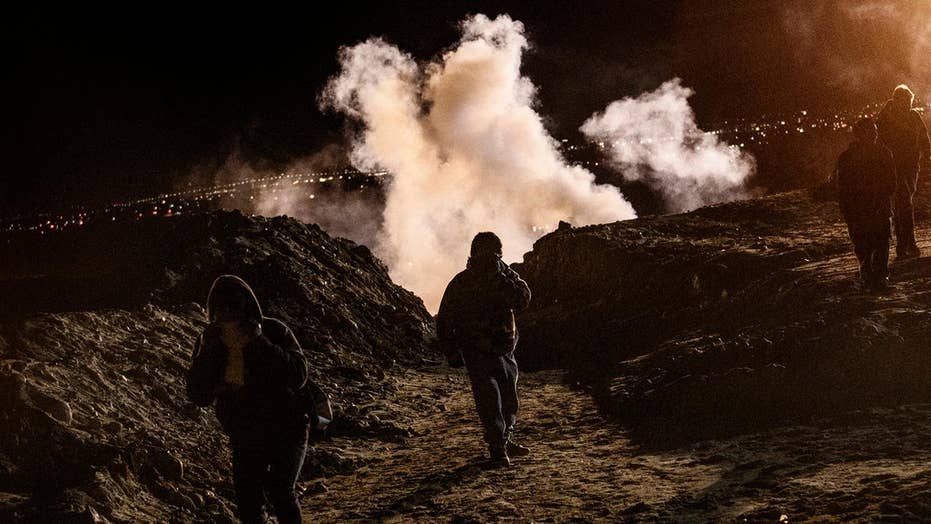 Deputy Commissioner for U.S. Customs and Border Protection Robert Perez says that some of the migrants stated the goal was to put the women and children ahead of the rock throwers.

As the debate over illegal immigration roars on, top Democrats insist that they love protecting America’s frontiers.

Rep. Nancy Pelosi of California promises that, as speaker of the House of Representatives, she will “fight for a strategic, robust national security policy, including strong and smart border security.”

While such Democratic statements sound reassuring, their votes, actions, and policies should terrify Americans. Despite pro-border-security rhetoric, Democrats repeatedly frustrate attempts to shield the United States from illegal immigrants, particularly those who are violent criminals.

• To their credit, Democrats voted in large numbers for border walls — fences, steel beams, and other barriers — in 2006 and 2013.

But in 2016, Donald J. Trump did something Democrats consider unforgivable: He beat Hillary Clinton. Democrats’ resistance reflex kicked in. Since the night Trump was elected, they have fought him around the clock. This includes battling his proposed border wall by any means necessary.

So, in their latest opportunity to support true border security — the wall — precisely one Capitol Hill Democrat said, “Yes.” Every other Democrat just said “No!”

This confirms that Democrats are not just the party of open borders. They have become the party of NO borders. For additional proof of this fact, look no farther than Rep. Keith Ellison, who Minnesotans elected last November as their new attorney general. He also is the Deputy Chairman of the Democratic National Committee.

Last year, Ellison appeared at a May Day parade where he wore a T-shirt that read: “Yo no creo en fronteras.” That’s Spanish for “I do not believe in borders.”

• The idea of abolishing Immigration and Customs Enforcement was a radical, far-left, boutique idea until six months ago. And then Alexandria Ocasio-Cortez rocked the Democratic establishment with an upset victory in her June 26 primary against veteran incumbent Joe Crowley of Queens, New York. Scrapping ICE was a key plank in her platform.

As this new bandwagon gained speed, Democrats tripped over themselves to hop aboard.

“I think we should get rid of ICE,” Senator Kirsten Gillibrand, D-N.Y., declared the next month. She said this should be “the first thing we should do” if Democrats took over either house of Congress. Too impatient to wait for this to happen, House Democrats last July introduced legislation to junk the agency.

In response, Republicans introduced H. Res. 990: “Supporting the officers and personnel who carry out the important mission of the United States Immigration and Customs Enforcement.” GOP members embraced this measure 226 – 1 last July 18. Among Democrats, only 18 voted Yes, and 34 actually voted No. Meanwhile, 133 Democrats, including Pelosi, chickened out and voted Present. Thus, Democrats unmasked themselves as openly hostile to ICE or, at best, too gelatinous to back ICE in public. As abolishing ICE has become a standard Democratic talking point, they evidently think America’s immigration laws should go unenforced.

• The Criminal Alien Gang Member Removal Act would allow U.S. officials to bar foreign members of criminal gangs — not least the vicious thugs of MS-13. The House weighed this bill on September 14, 2017. Republicans supported it 222-1. Democrats opposed it 11-174. (Pelosi skipped this vote.)

So, 174 House Democrats voted to give foreign gang members a clear path to enter the U.S.

• Kate’s Law would jail illegal aliens who have been convicted of serious crimes, including felonies, if they have been deported and then re-enter the U.S. These would include individuals such as José Inez García Zárate. This Mexican illegal immigrant had seven felony convictions and was deported five times before he broke back into America and fatally shot Kate Steinle, 32, at San Francisco’s Pier 14 in July 2015.

Local jurors accepted Zárate’s defense that his gun accidentally discharged as he tried to shoot seals in San Francisco Bay. However, they convicted Zárate for illegal firearms possession.

The House voted on Kate’s Law on June 29, 2017. Republicans supported it 233-1. Democrats opposed it 24-166. So: 166 Democrats, including Pelosi, voted to expose Americans to illegal-immigrant felons after they have been deported, and then bust into the U.S. anew.

Rep. Luis Gutierrez, D-Ill., accused Republicans of “painting a picture for all immigrants as resembling a career criminal like the guy who killed Kate Steinle.” As usual, Democrats claim that Republicans oppose all immigration.

Republicans want immigrants to enter legally and foreign criminals to stay out, so they do not come here and kill Americans.

• As of May 30, the Center for Immigration Studies counted 34 so-called sanctuary cities, 131 sanctuary counties, and seven sanctuary states: California, Colorado, Illinois, Massachusetts, New Mexico, Oregon, and Vermont. The word “sanctuary” is warm, friendly, comfortable, and derived from sanctus — Latin for “holy.” The reality is anything but.

A more honest term is “fugitive cities.” These jurisdictions — typically run by liberal Democrats — protect illegal-immigrant criminals who are, essentially, fugitives from justice.

They then commit new crimes.

San Francisco officials laughed off their federal counterparts who implored them to keep José Zárate until he could be seized on federal felony charges. So, San Francisco set him free, ultimately at the cost of San Franciscan Kate Steinle’s life.

“Gustavo Garcia would have been turned over to ICE officials. That’s how we’ve always done it, day in and day out,” said Tulare County Sheriff Mike Boudreaux. “But after SB 54, we no longer have the power to do that. Under the new state law, we must have a ‘federally signed warrant’ in order to do that. We didn’t honor the detainer because state law doesn’t allow us to.” He added: “That tool has been removed from our hands.”

After being arrested on misdemeanor drug charges and then sprung on December 14, the 36-year-old, twice-deported convicted felon soon launched what law enforcement called “a reign of terror.” Within 24 hours, starting on December 16, police says that Garcia:

1)   Seriously wounded a farm worker in a drive-by shooting

4)   Shot up a service station in Pixley

5)   Randomly shot and killed Rocky Jones, 51, at a gas station in Visalia

6)   Screamed threats at his ex-girlfriend

11)   Injured four people — one critically — after colliding into vehicles

14)   Flew through the windshield

In another case nearby, twice-convicted illegal-immigrant felon Gustavo Arriaga allegedly shot and killed Officer Ronil Singh in Newman, California, after a Christmas night traffic stop on suspicion of driving under the influence. Stanislaus County Sheriff Adam Christianson called Arriaga “a criminal illegal alien with prior criminal activity that should have been reported to ICE.” Christianson added: “Law enforcement was prohibited because of sanctuary laws, and that led to the encounter with Officer Singh. I’m suggesting that the outcome could have been different if law enforcement wasn’t restricted, prohibited, or had their hands tied because of political interference.”

• President Donald J. Trump implemented a temporary requirement that asylum seekers enter America through any of 48 official border crossings with Mexico, whereupon they would complete the requisite paperwork, speak with U.S. officials, and otherwise plead their cases.

But even this reasonable rule was too much for the left.

So, what the left demands is for asylum seekers to cross the border, not simply at any of these four-dozen approved locations, but wherever they please, between San Ysidro, California, and Brownsville, Texas. Find a cactus or Gila monster, jump over it, and then wander the desert until a Border Patrol officer appears. And then request asylum.

This chaos is akin to cheering on uninvited interlopers as they crash a wedding and not even through the front door, but by barging in through the basement.

While asserting that they favor border security, the Democrat left does not even want to throw America’s doors open in an orderly fashion. Instead, while resisting Trump, they facilitate a relentless rush of too-often-criminal potential Democrats who stampede in from every conceivable direction.