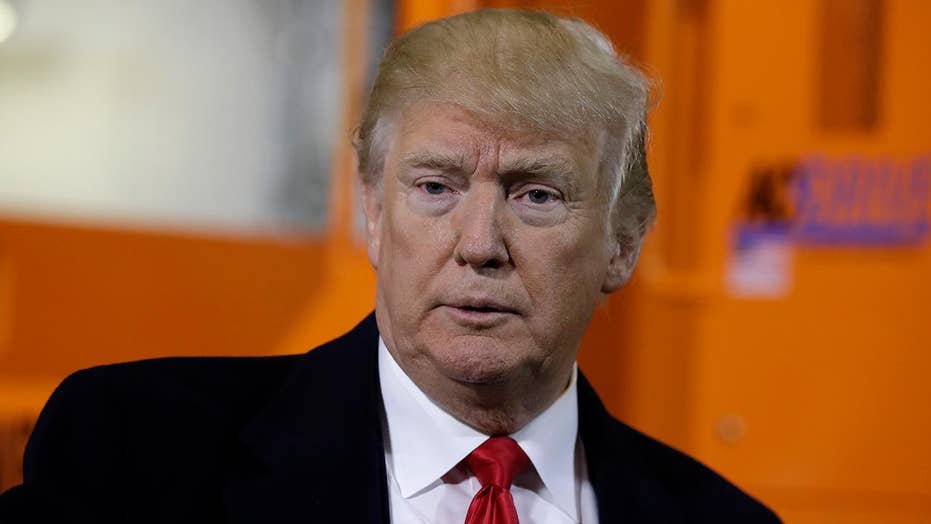 President tours Pennsylvania equipment plant before speech on taxes and the economy.

The disconnect between what congressional Democrats are saying about the recently enacted tax cut and what is happening in the real world is so wide that it is getting difficult to see across the chasm.

House Minority Leader Nancy Pelosi, D-Calif., who as the 15th richest member of Congress has a minimum net worth of nearly $30 million, referred to the millions of dollars in bonuses and pay hikes announced by more than 100 companies in the wake of the new tax law as “crumbs.”

Among the crumb-dispensers is Apple, headquartered just a few miles from Pelosi’s district. The tech giant is paying out $2,500 stock bonuses, planning $30 billion in capital expenditures over five years, and adding 20,000 employees. The company estimates that the direct impact on the U.S. economy will be more than $350 billion over that timeframe.

But Pelosi is far from the only Democrat who voted against tax reform while arguing that it would be an economic “Armageddon” for everyday Americans. Behind her stands a long list of Democrats in states that Donald Trump won, in some cases by large margins, who will have to explain how they could have been so wrong.

Here’s a rundown of what some Democratic senators from states carried by President Trump in 2016 have been saying.

Sen. Claire McCaskill of Missouri called the benefits of tax reform “scraps,” which sounds even worse than “crumbs.” Those “scraps” include $1,000 bonuses for all employees at the Bank of Advance in Advance, Missouri. Central Bancompany and BancorpSouth are also giving four-figure bonuses to Missouri-based employees.

Sen. Heidi Heitkamp of North Dakota at first tried to persuade her middle-class constituents that they were facing a $10,000 tax increase. When that distortion was exposed, she quietly backtracked, although she still has not publicly acknowledged her dishonesty or apologized to state residents.

“Republicans’ claims that this bill will provide robust, sustained economic growth are not true,” Heitkamp said. Since she said that, there has been nearly nonstop news coverage of bonuses, wage hikes, and new investment announcements benefiting millions of Americans directly attributed to the tax reform bill she opposed.

Sen. Sherrod Brown of Ohio said he “introduced multiple amendments that could have put real money in the pockets of Ohioans. Instead Washington chose to cut taxes for millionaires and corporations.” But Ohioans in every tax bracket will get a tax cut, and the typical family of four with the median income will get a tax cut of more than $2,000.

While a host of the corporations that Brown derides are offering bonuses and wage hikes, big companies are not the only ones rushing to share the benefits of tax reform with their employees. Bruns General Contracting in Tipp City, Ohio, is investing in plant and equipment and boosting retirement benefits. Coach, Truck & Tractor in Conneaut, Ohio, boosted Christmas bonuses for its seven employees.

Sen. Joe Donnelly of Indiana proclaimed  that “instead of providing a tax cut that overwhelmingly benefits the middle class, this bill cuts taxes for the wealthiest Americans while raising taxes on a majority of families making less than $75,000 in the coming years.” Again, simply not true. A Tax Foundation analysis shows a tax cut for all income groups, “with some of the largest changes in after-tax income accruing to moderate-income families with children.”

Sen. Tammy Baldwin of Wisconsin tried worn out and dishonest class warfare, too. “This is largely a tax giveaway to the wealthiest few, big corporations and Wall Street while millions of middle class families will face tax hikes,” Baldwin said.

Not only will those families be getting a tax cut instead, but Wisconsinites will also benefit in other ways. Green Bay-based Associated Bank, the state’s largest, is raising its minimum wage to $15 an hour and giving employees a $500 bonus. Stevens Point-based Copperleaf Assisted Living will hand out $60,000 in bonuses to employees -- equal to the company’s entire savings from tax reform.

With every new announcement of bonuses, wage increases and new hires, the naysayers come up with new rationalizations to dismiss it. With every analysis that shows working-class Americans are big winners from tax reform, they shout “giveaway to the wealthy!” and then bury their heads in the sand.

But reality is catching up to them – the reality that America’s economic future is brighter, and it’s no thanks to them. According to a recent New York Times survey, “support for the law has grown significantly over the past month, and more Americans believe that they will receive a tax cut.”

And we haven’t even scratched the surface of the economic growth that will result from increased productivity generated by longer-term investments.

Democratic lawmakers who opposed the tax cuts put politics before their constituents. Every new investment, new bonus and new job proves how wrong they were – especially in the eyes of the people who believed their misleading rhetoric.

Bill Riggs is vice president of communications for Freedom Partners Chamber of Commerce.