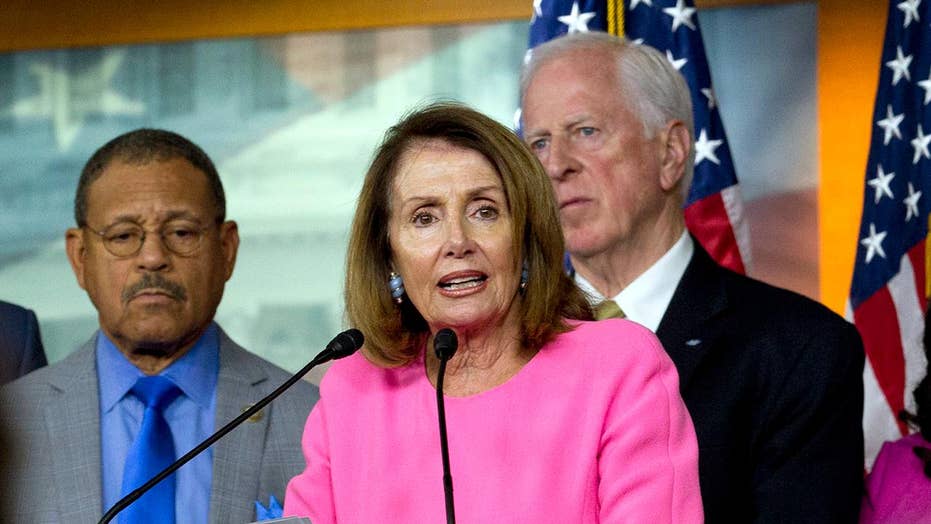 Abortion debate rages on ahead of Kavanaugh's confirmation hearing. Former law clerk to the Supreme Court nominee weighs in on 'Fox News @ Night.'

Democrats are absolutely desperate to stop the Senate from confirming President Trump’s extraordinarily well-qualified second nominee to the Supreme Court – Judge Brett Kavanaugh, who is currently serving with distinction on the U.S. Circuit Court of Appeals for the District of Columbia.

Kavanaugh is a brilliant jurist who successfully navigated the confirmation process 12 years ago to get on the appellate court where he now serves. And by all accounts the judge is a dedicated father and husband, respected and admired by those he has worked for and with, without even the slightest hint of scandal in his background.

Yet Democrats have declared war on President Trump’s nominee, even though voters who elected Trump did so in part because he promised to pick Supreme Court justices from a list of outstanding candidates that he made public.

“I’m going to fight this nomination with everything I’ve got,” Senate Minority Leader Chuck Schumer, D-N.Y., said recently, flanked by 10 Democratic members of the Senate Judiciary Committee. Schumer made it clear that his party will do everything short of breaking the law to keep Kavanaugh from taking the high court seat of retiring Justice Anthony Kennedy.

But much to their frustration, Democrats can’t keep Kavanaugh off the Supreme Court with a frontal assault. Republicans hold 51 seats in the 100-member Senate. And a handful of moderate Democrats up for re-election in November in states that voted for Donald Trump in 2016 may vote with their GOP colleagues to confirm Kavanaugh.

Democrats gear up for fight over Kavanaugh nomination

Fearing they don’t have the votes to prevent Kavanaugh’s confirmation, Democrats are developing a strategy of obstruction and delay.

This strategy would block Kavanaugh’s confirmation vote by making a patently absurd demand for as many as several million pages of records from his extensive government career as a Supreme Court clerk, an attorney on the investigation that led to the impeachment of President Bill Clinton, a senior aide to President George W. Bush, and an appeals court judge.

Under this plan, Democrats would demand the release of every single record that might be relevant to Kavanaugh, including emails, which could effectively push the hearings and vote well past the November midterm elections, when Democrats might win majority control of the Senate and then be able to defeat Kavanaugh’s nomination.

Democrats may demand all documents relating to Kavanaugh’s time working on the Clinton Whitewater investigation for Independent Counsel Kenneth Starr. But the nonpartisan National Archives has reported that there are about 20,000 such documents in its possession and that it would take 22 months to five years to review and release them.

And responding to a lawsuit by a “public interest” group under the Freedom of Information Act, the George W. Bush Library and Museum has stated that fulfilling the group’s demands for documents about Kavanaugh’s activities as a White House counsel and staff secretary would take 20 years – and in any case would not include nearly 14,000 pages of materials exempted under law.

Delays of this magnitude are – to use a legal term – absolutely nuts.

Before yielding to demands for the review and release of hundreds of thousands – or perhaps millions – of pages of documents, Republican senators should demand that their Democratic colleagues limit their demands to documents truly relevant to judging Kavanaugh’s fitness.

If Democrats refuse, Senate Majority Leader Mitch McConnell, R-Ky., would have grounds to schedule a timely vote before the November midterm elections.

After all, the object of the disclosure is not supposed to be to delay and defeat a nomination, but to permit the Senate to make a fully informed judgment about the nominee’s merits.

If 10 Democrats on the Judiciary Committee tell the world that their minds are completely closed regarding a nominee – as they have done – they are also saying that no amount of additional information can change their minds.

Senate Democrats had plenty of time to review this material in the three years – yes, three years – in which they held up Kavanaugh’s nomination to the federal appeals court in Washington. Another multiyear delay to review Kavanaugh’s nomination to the Supreme Court would be unjust and could set a dangerous precedent that could leave seats on the high court vacant for years.

Democrats might also prompt a fight over executive privilege to further delay matters. As a White House aide, Kavanaugh worked on matters of the highest sensitivity. As the Supreme Court recognized in the Watergate tapes case, the White House can claim “executive privilege” – the right to keep discussions between the president and his advisers secret.

The Supreme Court said this right of executive privilege would rise to its highest level if the subject involved national security, military and diplomatic affairs and law enforcement – but that other subjects might give way if the need of the other branches were compelling enough. Senate Democrats might try to delay a vote on Kavanaugh so long as the White House invokes executive privilege over Kavanaugh’s work as an aide.

The White House could extend a hand of cooperation by waiving its right of executive privilege over all but the most sensitive national security and military documents. But the White House should also resist the temptation to give up all of its rights, because that could set a precedent that would tie the hands of future presidents and would also discourage qualified candidates with previous government service from becoming judges.

Instead, the White House should stand firm that it will not produce the documents from Kavanaugh’s time as President George W. Bush’s staff secretary, when his job was essentially to control the flow of memos and orders that require the president’s personal review and signature. These documents would have little to do with Kavanaugh’s judicial views because he served as gatekeeper, rather than author of the documents he gave President Bush.

The Trump administration is not trying to stonewall document production. The Justice Department has told each of the 93 U.S. attorneys nationwide to provide up to three staffers to review documents relating to the Kavanagh nomination over the next few weeks. This kind of effort to speed up the release of documents requested by the Senate is unprecedented.

Senator Orrin Hatch, R-Utah, a veteran of many years on the Judiciary Committee, hit exactly the right note. Yes, Hatch acknowledged, “there is a lot, a lot of documentation they are going to have to disclose.”  But, at the same time Hatch warned, “I think you can ask for too much.”

Here is the bottom line: whether Democrats like it not, Donald Trump is the duly elected president of the United States. Whether they like it or not, voters elected a Republican majority to the U.S. Senate. Obstructing and paralyzing the functioning of the U.S. government – including the Supreme Court – is harmful to our national interest and dangerous.

If Democrats want to control who gets seated on the Supreme Court they will need to get the American people to put them back in charge of the Senate and elect a Democratic president.