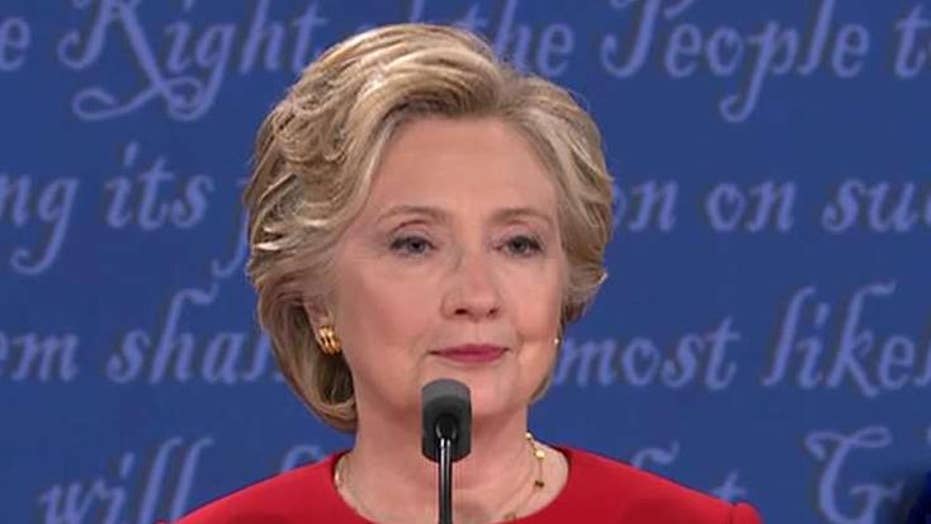 Did Clinton silence questions about stamina at debate?

While the moderator focused on interrupting and fact-checking Trump, Hillary Clinton offered a litany of lies to the nation on Monday night during her first debate against Donald Trump.

Clinton's nose began to grow from the very start, as she asserted that the nation needs to "finally guarantee equal pay for equal work" for women in her opening statement. The notion that women on average do not receive the same pay as men -- the 77 cents to a dollar myth -- has been proven false repeatedly.

When confronted by Trump about her former strong support for the Trans Pacific Partnership, Clinton claimed that she "hoped it would be good deal." The truth of course is that she called it the "gold standard" of trade deals.

The fact is that it is already illegal to pay men and women different wages for the same work if they have the same experience. The 77 cents myth is derived from looking merely at average income accrued over a lifetime, and ignores the fact that men on average tend to work longer hours, often work in higher paying industries, and spend more active years in the work force.

When confronted by Trump about her former strong support for the Trans-Pacific Partnership, Clinton claimed that she "hoped it would be good deal." The truth of course is that she called it the "gold standard" of trade deals.

Clinton also advocated raising taxes on the wealthy based on the premise that they do not currently pay enough. "I think it's time to suggest that the wealthy pay their fair share," she said. The truth however is that America have the most progressive tax system in the developed world -- the top 10 percent contribute over half of all income tax revenue.

Clinton and her team couldn't have been looking very hard, as Trump's plan to lower to corporate tax rate from 35 percent to 15 is written quite clearly on the economic plan posted on his website.

Taking time to remind the country that Clinton's success is due in large part to her surname, she asserted that "my husband did a pretty good job in the 1990s." Clinton, like all Democrats, loves to take credit for the financial stability of her husband's presidency. Of course, it was the Republican-controlled congress led by Newt Gingrich that blocked Clinton's desired spending measures balanced the budget.

Clinton also claimed that in being party to the Iran deal she helped "put the lid on Iran's nuclear program." But many said the deal guarantees no such thing. Indeed, it rests entirely on Iran's acting in good faith and upholding their end of the bargain.

When Trump defended the use of stop-question-and-frisk policies in New York City, Clinton attacked them as unconstitutional and asserted "it was uneffective it did not do what it needed to do." This is simply false.

"Data from the few cities that report police stops show their effectiveness," Dennis C. Smith, professor of public policy at the Robert F. Wagner Graduate School of Public Service at New York University, wrote in the New York Times in 2012 .

"My trend analysis with SUNY Albany professor Robert Purtell found that the increased use of stops correlated significantly with accelerating drops in most of the major crimes. A Harvard study of policing in Los Angeles under William Bratton, when crime dropped significantly, reported a surge in stops by the L.A.P.D. (with per capita stop rate higher than N.Y.P.D.)," Smith continued.

Perhaps Clinton's most egregious lies were two concerned with emails. "I made a mistake using a private email," Clinton said. Of course, Clinton didn't use a "private email." She used multiple private email servers. The word mistake implies Clinton didn't know she was doing anything wrong, a claim belied entirely by the fact that so many of her aides and associates pled the Fifth or were granted immunity by the FBI, not to mention the fact that many of them engaged in the destruction of evidence and that she herself made false exculpatory statements.

Finally, in visiting her favorite Trump-Putin conspiracy theory, Clinton claimed that "Donald publicly invited Putin to hack into Americans." The truth, as is obvious from the context of his words, is that Trump was calling on the Russians to release Clinton's missing emails in the event that they already had them.

Clinton may have proven her ability to hold her own against Trump one on one Monday night, but she also proved her complete disregard for the truth and willingness to lie boldfaced to the American people.

Edmund Kozak is a political reporter at LifeZette.