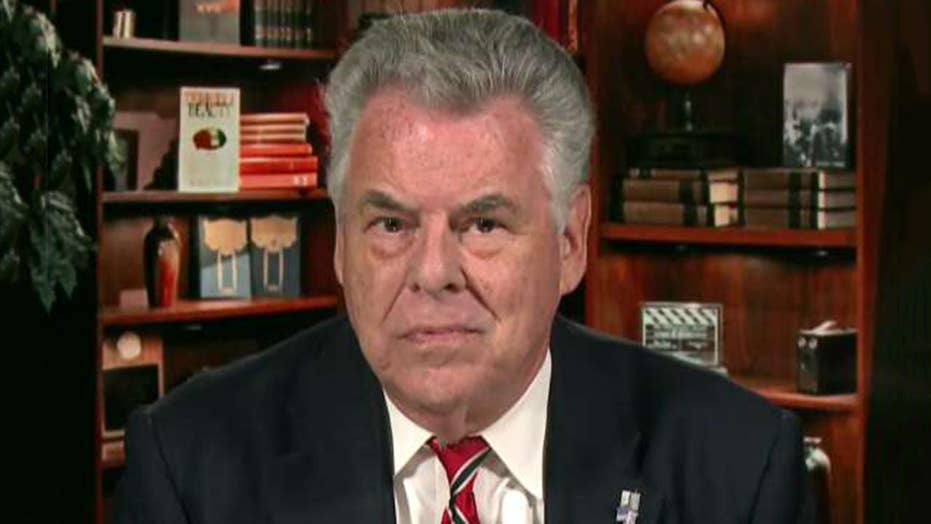 Rep. Peter King says Democrats are in a rush to judgment on impeachment

In the past three years we’ve seen widespread misconduct by opponents of candidate and later President Donald Trump.

We’ve seen bad actors at the highest levels of the FBI investigate Trump without any evidence of wrongdoing, while clearing their preferred establishment presidential candidate Hillary Clinton in the face of overwhelming criminal evidence.

We’ve seen an all-powerful special counsel appointed to investigate a phony dossier for two years, while ignoring the Democratic origins of the dossier and how it was used for political purposes to defraud the Foreign Intelligence Surveillance Act Court to spy on the Trump election campaign.

We’ve seen a Democratic Party come apart at the seams because ultimate political outsider Trump overcame all odds to be elected president, despite all the nefarious activity of the Obama-Biden administration aiming to defeat him.

We waited two years for the all-important report by Special Counsel Robert Mueller that Democrats and their allies in the mainstream media promised would disclose supposed collusion by President Trump or his campaign with the Russians. Instead, the report said there was no collusion.

At the same time, we learned that it was the Hillary Clinton campaign and the Democrats who sought Russian and Ukrainian assistance in trying to dig up dirt on candidate Trump and his associates.

The American people are astute and their eyes are wide open.

They know that what the Democrats are now attempting with their latest impeachment charade involving a Trump phone call with the new leader of Ukraine is just their latest political stunt – and this one reeks of desperation.

The Democrats are desperate to obfuscate what’s coming on the horizon. Justice Department Inspector General Michael Horowitz’s report on Foreign Intelligence Surveillance Act abuse is coming; U.S. Attorney John Durham’s findings on the origins of the Russia hoax are coming; and Attorney General William Barr is working to get to the truth that has been obscured by Democrats and the anti-Trump media for so long.

The circus created by the Washington swamp in the wake of President Trump’s phone call with Ukrainian President Volodymyr Zelensky is showcasing – once again – the obvious double standard that is afforded the liberal left by the biased mainstream media. But after the sad ordeal we’ve witnessed over the past three years, the American people have caught on.

As House Speaker Nancy Pelosi, D-Calif., attempts to move the goalposts in the absence of a quid pro quo with unserious theories about the so-called “sequencing” of events, the corruption involving Joe Biden is on video on the Internet for all to see.

In January 2018, while appearing at a public forum, Biden the braggart career politician admitted to an actual quid pro quo involving a $1 billion U.S. loan guarantee for Ukraine.

Here’s the problem for Biden. The Ukrainian prosecutor the vice president succeeded in getting fired was at the same time investigating a natural gas company called Burisma, where Biden’s son Hunter was a highly paid board member.

Despite all this, the Democrats and the liberal media are attempting the “nothing to see here” routine – but the American people aren’t buying it. They see a Trump-Zelensky phone call transcript with no quid pro quo and a Biden video with a quid pro quo.

The logical question is: Where is the investigation of Joe Biden and why aren’t the so-called truth-seeking media demanding it?

At the end of the day, the Democrats in charge of the U.S. House of Representatives are running a political smear campaign against the duly elected president of the United States and trying to convince the American people that it’s a legitimate impeachment inquiry. This won’t work.