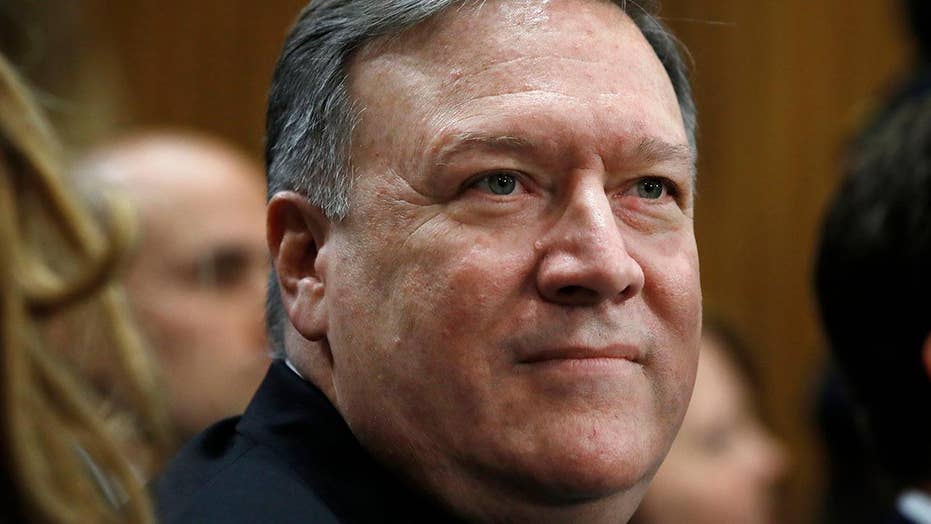 Will the Senate confirm Mike Pompeo?

National security analyst makes the case for the secretary of state nominee amid opposition from lawmakers.

The effort by Senate Democrats to block CIA Director Mike Pompeo from being confirmed as secretary of state is just the latest political stunt that unhinged liberals are trying to pull. Our Founding Fathers did not design our constitutional republic with this level of obstruction in mind from the minority party in the legislative branch.

Pompeo recently traveled to North Korea to meet with that nation’s leader – Kim Jong Un – to lay the groundwork for denuclearization talks with President Trump. Kim subsequently announced Saturday that he is suspending tests of nuclear weapons and missiles, and closing a nuclear test site.

Pompeo has the trust of President Trump and is uniquely qualified to be our nation’s next chief diplomat. He was confirmed by this same group of senators as CIA director by a vote of 66-32 just 15 short months ago in January 2017. And he is highly regarded for his foreign policy intellect, experience and leadership skills.

In addition to being first in his class at West Point, Pompeo served as a platoon leader in the Army and graduated from Harvard Law School. He served in Congress from 2011 to 2017 and was a member of the House Intelligence Committee.

Pompeo enjoys bipartisan support today and there is absolutely no reason not to confirm him to head the State Department. In past administrations – Republican and Democratic alike – nominees for secretary of state have received strong support from senators on both sides of the aisle. This is because of the importance of the position in the eyes of the leaders around the world.

This is a serious charge but it needs to be said. These irresponsible actions by Democratic senators continue to show the unmistakable fact that they hate President Trump more than they love their country.

For example, Madeleine Albright was confirmed as secretary of state with a 99-0 vote; Colin Powell was approved by voice vote; Condoleezza Rice was confirmed 85-13; Hillary Clinton 94-2; and John Kerry 94-3. Senators in both parties put America’s security ahead of politics in these votes.

However, the Democratic Party today is not functioning in a manner that makes American interests and security its top priority. These Democrats, driven by their enraged and radical base across the country, are determined to delegitimize and destroy President Trump and his America First agenda by any means necessary – even if it means endangering America’s national security.

This is a serious charge but it needs to be said. These irresponsible actions by Democratic senators continue to show the unmistakable fact that they hate President Trump more than they love their country.

This type of unhinged political opposition needs to be handled differently by the majority party in the United States Senate. As I’ve written on several occasions, Senate Republicans should suspend filibuster rules – in a responsible manner – on matters that affect our national security.

Such matters include building a wall to secure our southern border, and confirming the president’s nominee for secretary of state during a time when we’re trying to rid North Korea of its horrifying nuclear capabilities.

Let’s face facts: if and when these Democrats ever gain control of the Senate, the filibuster will be a thing of the past on issues large and small.

Senate Majority Leader Mitch McConnell, R-Ky., should understand where the radical left is headed and act accordingly without delay. The American people are tired of the gridlock in Washington and are beginning to see the Democrats for what they are. More than anything, our citizens are hungry for action and results on the issues that are most important to them.

The political games being propagated by Democrats in Congress are doing harm to our country and our system of government.  While it’s true that President Trump is an outsider who refuses to bow at the altar of the failed status quo in Washington, this is no reason to obstruct each and every thing he’s trying to do – even his qualified choice as secretary of state.

What will it take for the Democratic leadership to put national security over the next election?  This is serious business during very serious times and the American people are paying attention. It’s time to confirm Mike Pompeo – with a simple majority if necessary.

After that, the Senate can move on to the other pressing issues languishing in the halls of Congress due to the Democrats’ unprecedented obstruction efforts.  If Republicans in Congress move forward with the Trump agenda in the lead-up to the midterm elections, they will be rewarded with keeping the majority.