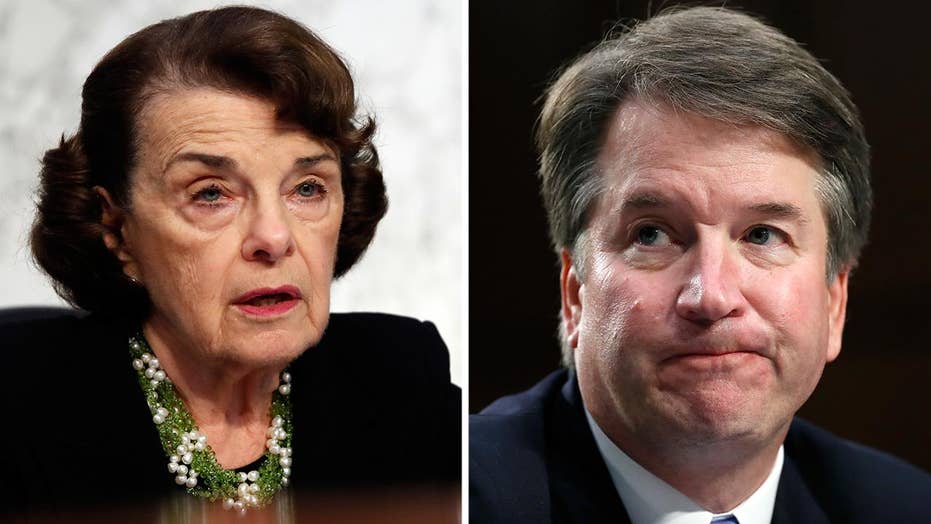 Senator Dianne Feinstein turns over letter of allegations against Kavanaugh to the FBI; attorney Carrie Severino reacts on 'The Ingraham Angle.'

The Supreme Court nomination seems like a new season of “House of Cards,” with many in the media helping write the script.

It’s had everything it needed to be a hit: lies about what nominee Brett Kavanaugh said; journalists thrilled by a self-aggrandizing senator who was lying and fantasizing he was “Spartacus”; another senator who promoted a phony video of the testimony; hundreds of radical protesters intent on shutting down the hearing and even attempts to threaten or possibly bribe a senator into voting him down. Now there’s a last-second allegation from … high school.

The accusation was Democrat Sen. Dianne Feinstein’s First-Monday-in-October surprise. It pushed a claim “from a woman who accused Kavanaugh of sexual misconduct when they were both in high school,” according to The New Yorker. Kavanaugh turned 53 in February. That means the claim is about 35 years old.

The attacks were so bad that even MSNBC Anchor Joe Scarborough skewered Democrats, complaining that “this is why a lot of people just don’t get involved in public service.”

Vox, HuffPost and CNN brought up comparisons to Anita Hill, who charged Justice Clarence Thomas with harassment during his nomination. Vox emphasized “The striking parallels between Brett Kavanaugh and Clarence Thomas.” Of course, what’s also implied is that Kavanaugh will be approved, just as Thomas was.

The broadcast stories didn’t explain that the letter was dropped just before a weekend and as a huge storm was hitting — strange if Democrats actually believed in the allegations and wanted them to get attention.

ABC’s Chief Political Analyst Matthew Dowd was quick to assign blanket guilt. “I don’t know if the allegations against kavanaugh [sic] are true, but keep in mind every high profile man accused of sexual abuse denies it and has released a list of women saying they are a good guy.  And each one turned out to be an abuser,” he tweeted.

Teen Vogue columnist Lauren Duca used her Twitter feed to bash Kavanaugh at least 11 times in two days, along with whining about the “white supremacist patriarchy.” She retweeted a call for him to withdraw, saying, “Extremely f--- this #StopKavanaugh.” (Dashes added by yours truly.)

Feinstein’s stunt didn’t resonate with everyone. ABC hit the timing hard, with “World News Tonight” Anchor David Muir asking, “and why was the letter just now revealed?” Chief Foreign Correspondent Terry Moran stressed, almost incredulously, that Feinstein had received the letter “back in July” and “two months after she received it.”

NBC also noted the odd timing, with “Nightly News” Anchor Lester Holt noting it was “less than a week now until a key vote.” The story added that Feinstein was given the letter “weeks ago.” The broadcast stories didn’t explain that the letter was dropped just before a weekend and as a huge storm was hitting — strange if Democrats actually believed in the allegations and wanted them to get attention.

2. More or Les: CBS has now lost three of its most powerful figures in a downward spiral of #MeToo allegations.

This week saw the ouster of the man Vanity Fair described as “legendary longtime” C.E.O. Les Moonves plus the executive producer of CBS’ “60 Minutes” and former chairman of CBS News Jeff Fager. This follows the firing of anchor Charlie Rose “in the wake of eight women accusing him of sexual harassment and unwanted advances,” explained NBC News.

Moonves lost his job after The New Yorker’s Ronan Farrow dropped another devastating #MeToo report. The story was horrifying — 12 women accusing Moonves of sexual harassment, as well as “claims that Moonves forced them to perform oral sex on him, that he exposed himself to them without their consent, and that he used physical violence and intimidation against them.”

Politico’s Chief Political Correspondent Tim Alberta called it “a stupid unforced error—handing Trump yet more ammunition to delegitimize all the objective, airtight, fact-based reporting out there.”

CBS awaits the results of an internal investigation it said will be kept private. “[W]e must have transparency,” demanded “CBS This Morning” co-host Gayle King, in response.

Moonves’ departure put Fager’s job in jeopardy. The New York Times said: “It would be hard to overstate Mr. Fager’s power inside CBS’s news division, where he succeeded the legendary producer Don Hewitt in overseeing ‘60 Minutes.’” The paper credited Moonves as having “collected 76 Emmy Awards and 13 Peabody Awards”

Fager also had sexual misconduct allegations against him and then he got fired for sending threatening texts to a CBS reporter. National Correspondent Jericka Duncan went on air soon after Fager’s firing and said she had asked him to comment on allegations that “he groped or touched CBS employees at company parties.”

Fager was incensed and sent her texts that appeared to threaten her job. “If you repeat these false accusations without any of your own reporting to back them up, you will be held responsible for harming me,’” went one text.

With his firing, Fager became the second CBS employee in a row to have the Fred Friendly First Amendment Award rescinded, according to the Times.

3. More Shady Journalism: Journalists pretend almost daily that there is no such thing as “fake news.” And then the New York Times and its State Department Correspondent Gardiner Harris do something so egregious that even liberals would have to call it fake news.

Harris took a story about expensive curtains ordered by the Obama administration for the UN ambassador’s residence and turned it into a hit job on Trump’s UN Ambassador Nikki Haley.

Several Times reporters retweeted it, each with their own little narrative. Investigative Reporter Eric Lipton wrote in a now-deleted tweet that, “Nikki Haley’s View of New York Is Priceless.” Vogue picked the story up only to modify it later. Rolling Stone still hadn’t fixed its story as of Saturday morning.

Track the story in NewsDiffs. It was originally headlined: “Nikki Haley’s View of New York Is Priceless. Her Curtains? $52,701.” Then it became “State Department Spent $52,701 on Curtains for Nikki Haley’s Residence” more than 14 hours later.

But, by that time, the story was widely mocked on Twitter because even the original story itself admitted that the curtains had been ordered by the Obama administration, though it buried that detail in paragraph six. The Daily Beast’s Matt Lewis summed it up nicely. “Every time someone in the MSM does something like this (and it happens a LOT), they lend credence to the 'fake news' narrative…”

Post Media Reporter Paul Farhi embarrassed the biased author a bit: “Reached by phone on Friday, the reporter of the Times story, Gardiner Harris, hung up without comment. He did not respond to follow-up messages.”

The Times caved to the pressure and added a 97-word “Editor’s Note.” It wasn’t an apology. It did explain the extent of the problem. “The article should not have focused on Ms. Haley, nor should a picture of her have been used,” it explained.

CNN Anchor Jake Tapper spent six tweets to fact check “the false meme bopping around about @nikkihaley’s $52,701 curtains,” though he effectively disproved it in his first. Politico’s Chief Political Correspondent Tim Alberta called it “a stupid unforced error—handing Trump yet more ammunition to delegitimize all the objective, airtight, fact-based reporting out there.”