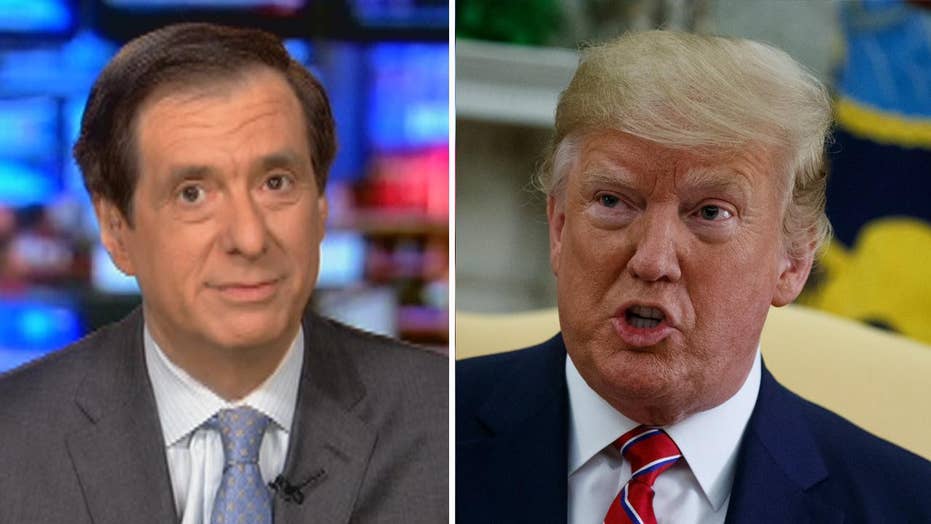 Howard Kurtz: Why Trump answered that hypothetical from Stephanopoulos

'MediaBuzz' host Howard Kurtz weighs in on media's obsession with polls, and President Trump telling George Stephanopoulos that he would hypothetically accept information from a foreign country about a political opponent.

The election is nearly 17 months away, but the media are already working overtime to hype the early stages of the campaign. This week journalists obsessed over polls speculating on which Democrat might beat President Trump, even though no one knows now who the Democrats will nominate.

Keep in mind that Trump defied polling last time. And when he announced his candidacy on June 16, 2015 – exactly four years ago Sunday – many in the media laughed at his candidacy, saying it was just a publicity stunt with no chance of success.

Broadcast networks were screaming this week about how former Vice President Joe Biden had a 13-point national lead against President Trump. Margaret Brennan of CBS News told viewers about the Quinnipiac University poll results and how the “Trump campaign has a reason to be worried.”

Also on CBS, reporter Ed O'Keefe hit viewers with the calendar, noting that “there are 237 days until the Iowa caucuses and 511 days until election day 2020.” He didn’t think to ask why he was doing the story so far out. No, the press must have a horse race even if it’s a 511-day Preakness.

ABC was just as bad. Anchor David Muir warned ominously about the “the new and eye-opening numbers” as if they actually matter at this early stage.

NBC “Today” co-host Savannah Guthrie delivered a similar ominous warning: “Warning signs? The new polling this morning that shows the president’s re-election could be in trouble.”

But it’s never just the numbers. It’s the bogus journalism. CNN teed up a primary speech with a chyron saying “Biden to eviscerate Trump in Iowa speech today.”

New York Times reporter and CNN analyst Maggie Haberman provided Biden’s air defense. "Joe Biden's core strength is his decency," Haberman said, sounding like a member of the Biden campaign team. She then added that Team Trump was "having a very hard time figuring out how to attack that."

I wonder if Haberman was referring to the decency of Biden flip-flopping about whether federal funds should be used to pay for abortions. After opposing such funding for decades, Biden suddenly said he supported it after he was criticized by other Democratic presidential hopefuls.

Then equally neutral NBC News announced its lineup of Democratic presidential primary debate moderators, which had one standout from the ordinary liberal press – far-left Rachel Maddow, from far-left MSNBC.

Should be a riveting two nights of “debate” coverage.

One of the default news stories during the Trump presidency has been media reaction, and often overreaction, to something the president said. This week it was Trump commenting about hypothetical foreign offers of information on political opponents. "I think you might want to listen, there isn't anything wrong with listening," he said.

One of the default news stories during the Trump presidency has been media reaction, and often overreaction, to something the president said.

Figliuzzi told viewers Trump “sounds like a capo in La Cosa Nostra.” Then he added: “I’m more convinced than ever that this president may well be owned or will soon be owned by the time of the 2020 election.”

What those comments were missing was context. Journalists ignore that the Hillary Clinton campaign paid a foreign operative for the Steele dossier. Then-candidate Clinton told “The Daily Show”: “It’s part of what happens in a campaign where you get information that may or may not be useful and you try to make sure anything you put out in the public arena is accurate.”

Then there’s Clinton 2016 campaign press secretary Brian Fallon, who told The Washington Post in 2017 he’d even “go to Europe” so he could “try and verify if it would have helped get more of this out there before the election.”

Don’t expect to read those quotes in many places.

Acosta’s new book, “The Enemy of the People: A Dangerous Time to Tell the Truth in America,” is his attempt to cash in on the celebrity he has gained by wrecking journalism from within in his war against the White House.

The book is a 354-page rationalization about doing journalism with heaping helpings of bias. And it talks tons about its real subject – Acosta. Amazon has a sample that includes the first chapter and the prologue. Combined there were more than 100 “I” mentions and more than 25 “me” mentions. Just in case you wondered what the book was really about.

First, a good example of the book’s view of journalism: “Purists in the field of journalism and academics opining from the safety of the classroom can lament the downfall of neutrality. But neutrality for the sake of neutrality doesn’t really serve us in the age of Trump.” Because there was no pre-Trump media bias?

Acosta claimed in an interview this week that “I have never witnessed a concerted effort by any news organization to take a stand one way or the other on a political issue, to damage one particular party or help another.” Apparently, he doesn’t watch CNN.

Sanders jeered on the way out

White House press secretary Sarah Sanders is exiting stage right and many in the American press couldn’t be happier.

Sanders has been the target of the news media and the butt of jokes from Hollywood since she took the job. It got so bad she was denied service at a restaurant. And Washington Post columnist Jennifer Rubin said Sanders should receive a "life sentence" of harassment.

Forget what feminists claim. If a conservative woman rises to a powerful job, it’s OK to make fun of her looks.

Daily Beast and GQ magazine Culture Writer Ira Madison III made that clear when he called Sanders a “Butch queen first time in drags at the ball.” He apologized, but who would believe him?

Sanders’ tenure was marked by a rise in the Acosta style of “journalism.” (See above.) That meant she was often squaring off with the press and they resented it.

CNN turned to political analyst April Ryan, who snarked that Sanders is afflicted with “lie-abetes.”