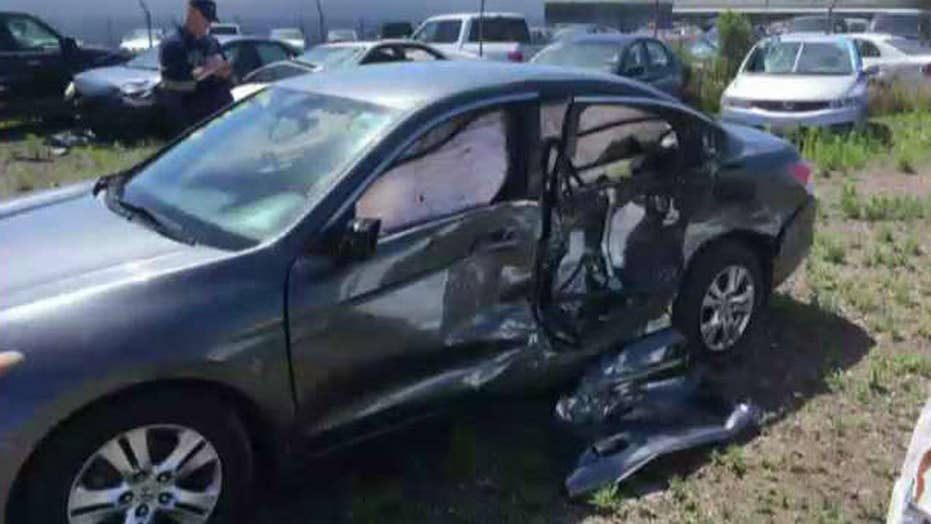 DUI suspect in crash that injured boy was deported 15 times

Father of injured child speaks out on 'Fox & Friends'

Lennox Lake was having the time of his life on Saturday. The six-year-old had tagged along with his mom and dad on a road trip to central California.

Lennox had been such a good boy, his parents decided to treat him to a surprise stop at Disneyland – the happiest place on Earth.

On the way drive back home to San Ysidro, the Lakes treated their good little boy with one final treat - a frosty milkshake from In-N-Out. They were just a block from their home.  But they never made it.

Police say the Lakes were hit by an alleged drunk driver – a man identified as a Mexican national – a man living in our country illegally. Immigration and Customs Enforcement tells Fox 5 in San Diego the suspect had been deported 15 times over the past 15 years.

Constantino Banda-Acosta is accused of slamming his pickup truck into the passenger’s side of the Lake family’s Honda Accord. And then, he fled the scene.

Benjamin and Ingrid Lake suffered minor injuries, but Lennox was gravely injured. He was bleeding from his nostrils and his ears.

The San Diego Tribune reported that the child was unconscious, not breathing.

Benjamin Lake tells me his son has had two surgeries and doctors are cautiously optimistic the child will fully recover.

“He’s a fighter,” Ben said. “Really – my strength comes from Lennox and seeing him fight so hard. I want to do everything possible for him.”

Ben and Ingrid have been taking turns sleeping on a couch in the hospital room – 24 hours a day.

“We don’t want to leave his side,” Ben told me.

In the meantime, family members have launched a GoFundMe page to help cover medical bills and other expenses.

The San Diego Tribune reports the suspect is being held on $100,000 bail. Banda-Acosta faces a number of charges including felony hit and run, drunken driving and driving without a valid license.

“It’s hard not to be angry – the fact that this is like the 15th time he’s had a run-in with the police,” Ben told me. “It’s angering. There is something wrong with the system where this guy can keep coming back.”

The Lake family has every right to be angry – furious.

“He’s hurting people and somehow he keeps coming back – it doesn’t make any sense,” he said.

San Diego’s mayor says they are not a sanctuary city – but the Lake family feels otherwise.

“It’s hard not to feel that way after this happened,” Ben said. “Before all of this I was indifferent, but I definitely don’t support sanctuary cities.”

But I also urge you to call your elected leaders – and demand they take immediate action to secure the border and rid our nation of the scourge of illegals.

How many more six-year-old children must be injured by illegal aliens before Washington, D.C. takes action? How many more families must be terrorized by the invaders?

California lawmakers are considering legislation to become a “sanctuary state.” The legislation would, in effect, provide refuge for illegals like the one who nearly killed Lennox Lake.

Let me be clear: sanctuary cities may provide a safe haven for illegals, but they create a living hell for the rest of us.