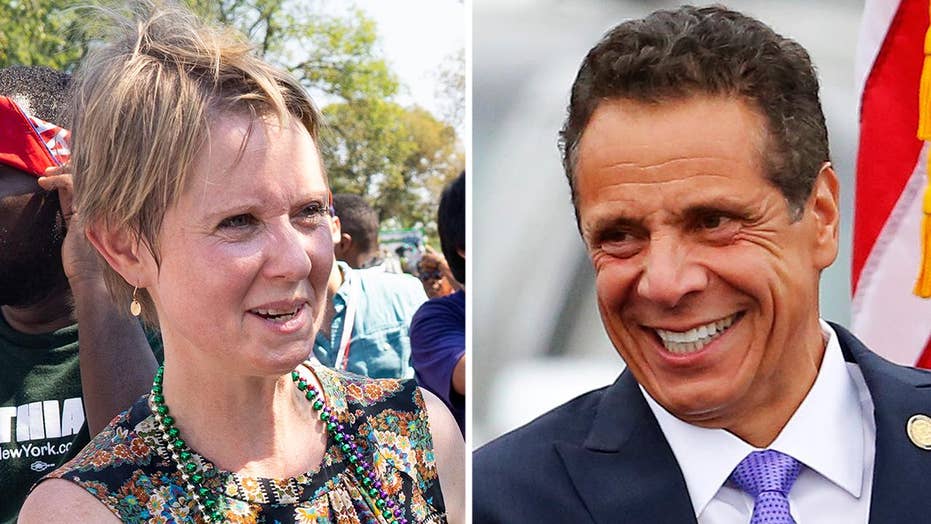 Andrew Cuomo moves to the left in race against Cynthia Nixon

Will a far-left approach work in general elections for Democrats? Radio host Robert Patillo weighs in.

The victories by the three – who supported each other in the primary – were a setback for those who want to move liberal New York state government and the national Democratic Party further to the left.

Despite their differences, all of the Democratic primary candidates were united in sharp criticism of President Trump and his polices.

The New York primary was the last of the state primaries across the nation before the Nov. 6 midterm elections. No Democratic senator or governor who sought re-election was defeated in a party primary this year.

Attesting to his dominance of New York politics and his fundraising prowess, Cuomo spent about $25 million to win an overwhelming victory against former “Sex and the City” actress Cynthia Nixon. A first-time candidate, Nixon raised only about $2.5 million and positioned herself well to Cuomo’s left in a bitter campaign.

With 99 percent of precincts reporting, Cuomo had 66 percent of the vote and Nixon picked up 34 percent.

Cuomo was endorsed by the state’s most powerful Democratic elected officials, party leaders and unions. He is now the overwhelming favorite to win a third term in the heavily Democratic state and follow in the footsteps of his late father, three-term Gov. Mario Cuomo.

Republican Dutchess County Executive Marc Molinaro will face Cuomo in November as the GOP candidate. Several minor party gubernatorial candidates will also be on the ballot.

As the nominee of the far-left Working Families Party, Nixon can challenge Cuomo once again in November if she wishes. She must now decide whether to withdraw from that minor party line, and if she does the party – which has been critical of Cuomo – must decide whether to give him its spot on the ballot. Candidates in New York can run with the support of more than one party.

Cuomo suffered a lot of negative publicity during the last week of the campaign. The unveiling of the new Tappan Zee Bridge across the Hudson River -- which Cuomo had renamed for his father -- had to be delayed after the governor claimed prematurely that it was ready. Supporters of Cuomo also sent out a mailer implying that Nixon was anti-Semitic, even though her children are Jewish.

But none of that mattered. Cuomo’s victory margin was four points higher than his primary victory four years ago over far-left law professor Zephyr Teachout.

Teachout, who supported Nixon against Cuomo, went down to defeat Thursday in her effort to win the Democratic nomination for attorney general. She could have caused Cuomo problems if she had become attorney general, launching investigations against his administration.

Letitia James won the Democratic nomination for attorney general with 41 percent of the vote, to 31 percent for Teachout, 25 percent for U.S. Rep. Sean Maloney and 3 percent for Leecia Eve.

James is expected to be elected attorney general in November, and if she is she will be the first black woman to be elected to statewide office in New York history. Her Republican opponent will be Keith Wofford.

New York has filed several lawsuits against President Trump’s policies and his charitable foundation, so James will gain national prominence in pursuing those cases.

Cuomo’s handpicked lieutenant governor, Kathy Hochul, beat back a challenge from New York City Councilman Jumaane Williams, another far-left candidate who ran with the backing of Bernie Sanders supporters. Hochul won 53 percent of the primary vote to 47 percent for Williams.

Hochul, who is white, showed clear weakness with minority voters, whose support allowed Williams, who is black, to carry New York City. But Hochul won easily upstate to stave off Williams' challenge. The GOP candidate for lieutenant governor is Julie Killian.

The one area where the left did well in the primary was in challenging members of the Independent Democratic Caucus, a group of moderate Democratic state senators who in recent years have joined forces with Republicans and kept that chamber in GOP hands.

A series of well-funded challenges succeeded in toppling a majority of the eight IDC senators running for re-election. The odds are that after November, Democrats will finally control both the governorship and both houses of the New York Legislature for the first time in decades.