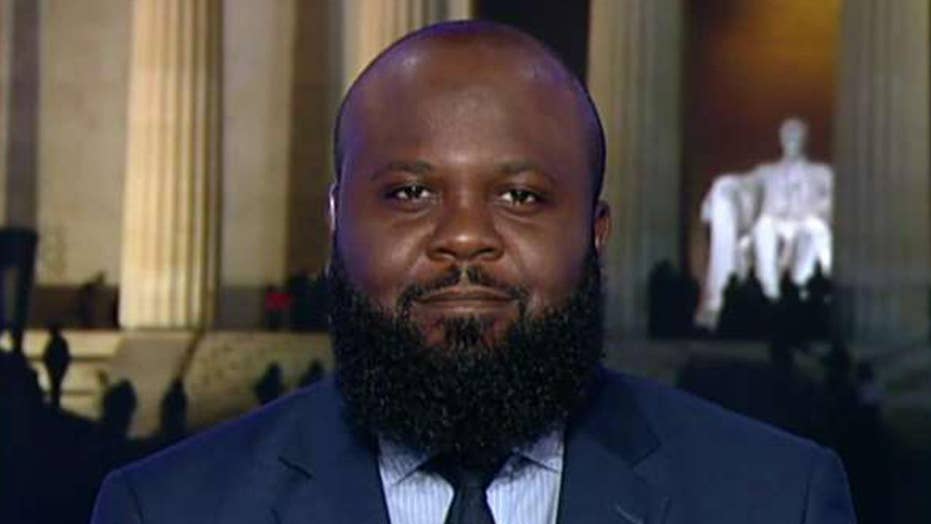 Ja'Ron Smith, special assistant to the president, addresses prisoners being released due to the First Step Act on 'Tucker Carlson Tonight.'

Attorney General William Barr is expected to reveal a risk-assessment tool soon that will help evaluate the needs of federal prisoners, target programming to help reduce their risk of recidivism, and, in some cases, potentially speed their release. He has confirmed that the Justice Department and the Bureau of Prisons are both "all in in terms of making it work."

This is the next important phase in the full implementation of the FIRST STEP Act, or FSA, a bipartisan piece of legislation that President Trump signed with great fanfare in late 2018. Already, FSA has resulted in 1,386 sentence reductions and 1,023 early releases. Several returning citizens who benefited from these reforms, including Matthew Charles and Troy Powell, attended the White House FIRST STEP Act Celebration this past April.

Under an expansion of good-time credits, an additional 3,100 prisoners have gone home since the beginning of July, allowing the BOP to focus on transforming the prisoners who remain into law-abiding citizens. The White House is working hard to identify reentry resources and potential employers, so that these men and women can have meaningful opportunities not only to avoid additional prison time, but also to be thriving, contributing members of their communities. But even with these important steps, much remains to be done.

FSA’s federal sentencing and prison system reforms still face key administrative and financial challenges. Since May 2018, the Bureau of Prisons has lacked a permanent director. The agency urgently needs a committed, effective leader to drive implementation of the reforms in the FSA. Five vacancies on the U.S. Sentencing Commission also mean that the sentencing reforms included in the FSA are yet to be incorporated into the sentencing guidelines used by federal judges.

In other significant ways, the FSA has yet to live up to its promise. Evidence-based programming to reduce recidivism, a much-touted pillar of the bill, is not yet fully funded or implemented. Further, the BOP has yet to allow faith-based prison programs with a proven record of recidivism-reduction, including Prison Fellowship, to function as reentry programs outside the chaplaincy.

As the largest Christian nonprofit serving prisoners and their families, we urge Congress to exercise its oversight and budgetary powers to ensure this historic achievement in federal criminal justice reform does not falter before its potential is realized. And the public must let Congress know how important it is that these reforms be implemented fully and without unnecessary delay.

Ultimately, it will not be Congress, the Bureau of Prisons, or the White House that must live with the successes or failures of the FIRST STEP Act. It will be the families with a loved one in federal prison, the incarcerated men and women working toward their second chance, and the countless neighborhoods to which they return after release.

The Bureau of Prisons is the largest single prison system in the United States. The men and women behind its bars, despite the choices that got them there, have great, untapped potential. They can return to society as better citizens, neighbors, employees, moms and dads. And when these former prisoners succeed, crime rates go down.

But it will take the full implementation of the FSA, putting the tools for success in the hands of those who need them. And it will take all of us — employers, faith communities, social service organizations, and ordinary citizens — doing our part to come alongside government, advocating for continued reform and building a society of second chances.

FSA was never meant to be the last step toward criminal justice reform. Rather, in a time of marked political division, it is the first milestone, reminding us all what is possible when we choose to walk the path of restoration together.

Craig DeRoche is the senior vice president of advocacy and public policy at Prison Fellowship, the nation’s largest Christian nonprofit serving prisoners, former prisoners, and their families. He is the former speaker of the Michigan House of Representatives and a recovering alcoholic.