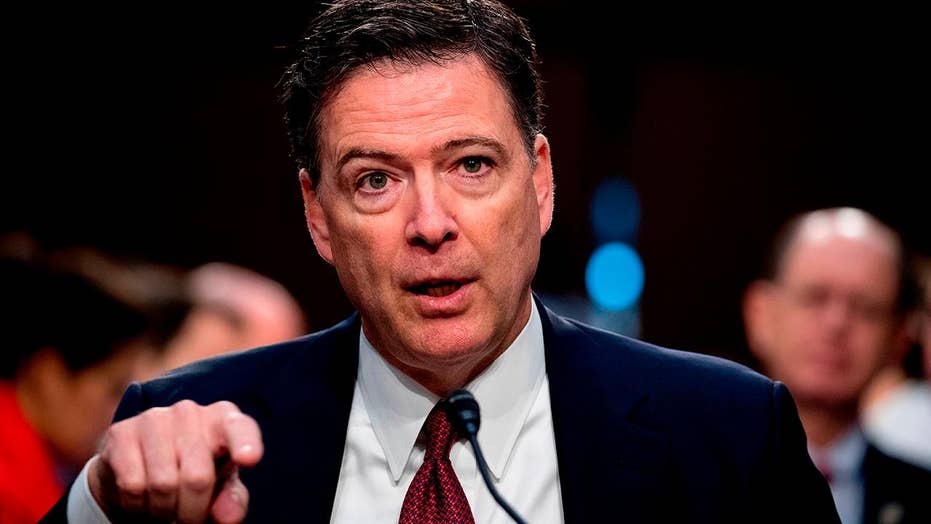 Bipartisanship has returned – if ever so briefly – to American politics. We can thank fired FBI Director and new best-selling author James Comey, a polarizing figure who is hated by Republicans and Democrats alike – but loved by the media as a ratings bonanza.

Yet even most of the media still blame Comey for costing their beloved Hillary Clinton to lose the 2016 presidential race to Donald Trump.

Comey is working the media circuit overtime, promoting his new book, “A Higher Loyalty: Truth, Lies, and Leadership,” which hit bookstores Tuesday. It promises him a far bigger payday than he could ever earn at the FBI.

Remarkably, Comey is making news by not making news with new facts. His new book simply allows the fired director to vent and whine about the man who fired him – President Trump.

Just about everyone who has ever been fired is angry at their boss – but very few earn millions of dollars complaining about being shoved out the door, or appear on national news program on TV.

In fact, interest in Comey interviews – beginning with one he did in a one-hour special aired on ABC-TV Sunday night – is so high that competing networks are airing each other’s interviews, breathlessly giving us Comey talking morning, noon and night. You need to unplug your TV and computer and stop reading your email on your phone to avoid seeing him complain, complain and complain some more.

Comey – who clearly considers himself deserving of sainthood – whines that President Trump is “morally unfit to be president.” Hey – what do those dumb voters who put Trump in the White House know?

Comey is cashing in on his firing big time, thanks to his  “multimillion-dollar book deal with Flatiron Books,” so he’s got that going for him.

Here’s the key point, courtesy of The Washington Post: “Comey does not accuse Trump of committing a crime.”

Liberal Vice also admitted: “Comey’s redemption tour is one that appears to be a cynical attempt to promote his book and his personal brand, not show the world a smoking gun.”

Why? Because there was no smoking gun. But let’s not let the facts get in the way of a ratings bonanza for TV shows promoting Comey interviews like the story of the century.

Comey’s book and his mouth are full of slams against President Trump. They are what matter. His interview with ABC anchor George Stephanopoulos – a former top aide to President Bill Clinton – was watched by nearly 10 million viewers.

The whole interview lasted five hours and the transcript alone is more than 42,000, words with more than 100 mentions of “Trump.”

The media have dwelled on the disparaging comments, with Comey saying President Trump reminded him of a mob “family boss” and fixating on the allegations Trump had been with prostitutes. CNN mentioned the most salacious allegations about Trump 77 different times.

To their credit, the media have reported on criticisms of St. James from both the left and right.

The Hill headlined: “Clinton allies seethe with rage at Comey.” And the story goes on to say: “They are particularly incensed by Comey’s acknowledgment that, when deciding how to handle the investigation into (Hillary) Clinton’s email server, he took into account polls showing she would win the White House.”

Liberal Vox even headlined: “Why James Comey isn’t the hero you think he is.”

Rep. Debbie Wasserman Schultz, D-Fla., criticized Comey’s announcement of the results of his investigation of the Hillary Clinton emails. “Doing what he did 11 days before the election was inappropriate and definitely violative of longstanding FBI practice,” Wasserman Schultz said, according to the Sun-Sentinel in Florida.

On the right, criticism of Comey looked remarkably similar.

First there was former New Jersey Republican Gov. Chris Christie, who said Comey would have fired him if he had done exactly what Comey did. “When I worked for Jim, if I had said to him 11 days before an election that I was going to release information that could potentially affect the election, and one of the things that influenced me was polling, he would have fired me. He would have fired me on the spot,” Christie told ABC's "This Week."

But the TV networks couldn’t get enough of Comey. ABC, CBS and NBC have managed two hours, 24 minutes in just five days of coverage on both morning and evening news shows. CNN and MSNBC are promoting interviews incessantly.

Perennial Democrat Stephanopoulos, who mainly tossed softballs at Comey during his ABC interview, emphasized that he was clearly upset about the “clear, clear, clear double standard” of how Comey treated Clinton and Trump. He even gave Comey a chance to apologize to Clinton. “If she were sitting right here today, what would you tell her?”

Still, Comey was obviously anti-Trump enough to warrant all five hours and most were filled with things the anchor agreed with. Like how Comey’s own wife and daughters were part of the March for Women.

“January 21st, 2017, one day after President Trump is sworn in, hundreds of thousands of demonstrators take to the streets. Among them, the wife and daughters of FBI Director James Comey,” Stephanopoulos said, as video of the anti-Trump protest aired during the special on Comey.

Then viewers get another key Deep State fact from Stephanopoulos when he told Comey: “Your wife Patrice, Hillary Clinton supporter.”

That was followed by Comey saying: “Oh, yeah. And I didn’t take a poll among all the kids, but I’m pretty sure that at least my four daughters, probably all five of my kids, wanted Hillary Clinton to be the first woman president.”

But of course, that couldn’t possibly influence St. James.

Even the major media have admitted that Comey’s brand has been damaged by his anti-Trump attacks. The New York Times cautioned: “James Comey’s Attacks on Trump May Hurt a Carefully Cultivated Image.”

They’re both right. But why should Comey care? He can laugh all way to the bank. Just hours after his book was released Tuesday, Amazon said it was already its best seller, with over 200,000 copies pre-ordered.