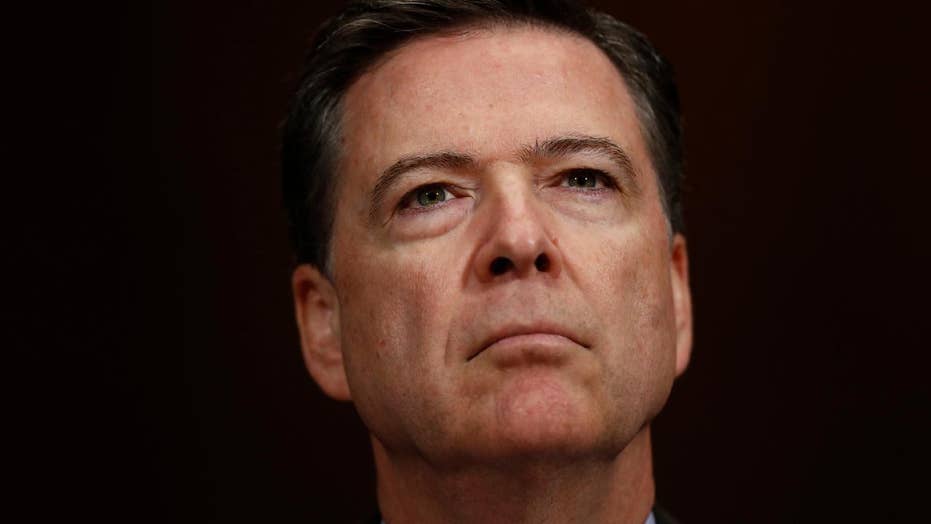 Comey agrees to testify before Congress after being fired

Sometimes, when dark storms gather, and we range furiously against each other, the sky clears and all men good and true suddenly find themselves in agreement. So it is with the news that former FBI Director James Comey will share his feelings with a Congressional committee on June 8. However else we might be divided we can all agree that Trump shouldn’t have fired Comey on May 9. He should have done so on January 20.

This was, after all, what the Democrats had wanted, to hear them talk about how Comey had thrown the election to Trump. “If the election had been on October 27, I would be your president,” Clinton announced at a Women for Women International event on May 2.

But on October 28 Director Comey announced that he had received a batch of new Clinton emails from Anthony Weiner’s computer, and that he was reopening the investigation of her.

Three months earlier, Comey had detailed her lapses and declared her handling of classified information “careless” but not criminal. Now we all wondered what would come next.

Then on November 6, two days before the election, Comey announced that the new emails had been read, and absolved Clinton a second time. That was too late for the early voters, however, and too late also for people who sensibly had figured out how they’d vote and had moved on to other things.

Was Clinton right to blame her loss on Comey? We’ll never know. What the polls said on October 27 didn’t matter. The pollsters had spectacularly failed to predict what would happen on Election Day, and even without Comey most Trump supporters knew all they had to know to cast their votes.

What we didn’t need, however, was the posturing of the drama queen to tell us of news or great import, and then to announce like "Saturday Night Live’s" Emily Litella, “Never mind!”

We didn’t want to know that he felt “mildly nauseous” at the thought that he had swayed the election. At that point we didn’t give a damn about how he felt.

We wondered why we had to know that the FBI director, wearing a blue suit, tried to blend in to the blue curtains of the White House’s Blue Room. Heaven forfend that Trump would recognize him. A modest peck on the cheek would do. But no, Trump had to call him over and give him a bear hug, a great public display of affection.

Now we’re told that Comey thought that Trump was trying to shut down the investigation of Mike Flynn, whom Trump had fired as National Security Adviser on February 13.

A few days later, Trump met with Comey and told him he hoped there wouldn’t be a further investigation of Flynn. “I hope you can let this go,” Comey wrote in his notes, “I hope you can see your way clear to letting this go, to letting Flynn go. He is a good guy.”

Was Trump was pressuring Comey to lay off Flynn? That apparently is what Comey will tell Congress. Except there are three problems with this.

First, the White House disputes that Trump asked Comey to end any investigation of Flynn.

Second, even if Comey’s account is accurate, it doesn’t necessarily amount to pressure to end an investigation. Maybe Trump was simply feeling sorry about having to fire a friend, someone whom indeed he had considered as a possible vice-president. That’s consistent with what Comey said next, according to his notes. “I agree [Flynn’s] a good guy.”

So maybe that’s all that happened. Although I might feel better had Trump not asked Mike Pence and Jeff Sessions to leave the room when he spoke to Comey. In Sessions’ case, he had to be asked twice. I wish Sessions were in the room all the time.

Still, there’s a third reason not to get worked up about Comey’s testimony. The best evidence that Trump wasn’t pressuring Comey is that Comey didn’t resign.

If Comey had been ordered to stand down, that would have been the proper thing to do. Instead, he simply carried on, as did the investigation in general.

Acting FBI Director Andrew G. McCabe, a Comey loyalist and Democrat, afterwards said, “There has been no effort to impede our investigation to date.”

Now, in Robert Mueller, we have a special prosecutor of unimpeachable integrity, charged with getting to the bottom of all the innuendo.

If there’s anything to find about Flynn and Russia, it’ll come out.

And it’s becoming increasingly clear that Trump was right, and that there’s nothing there.