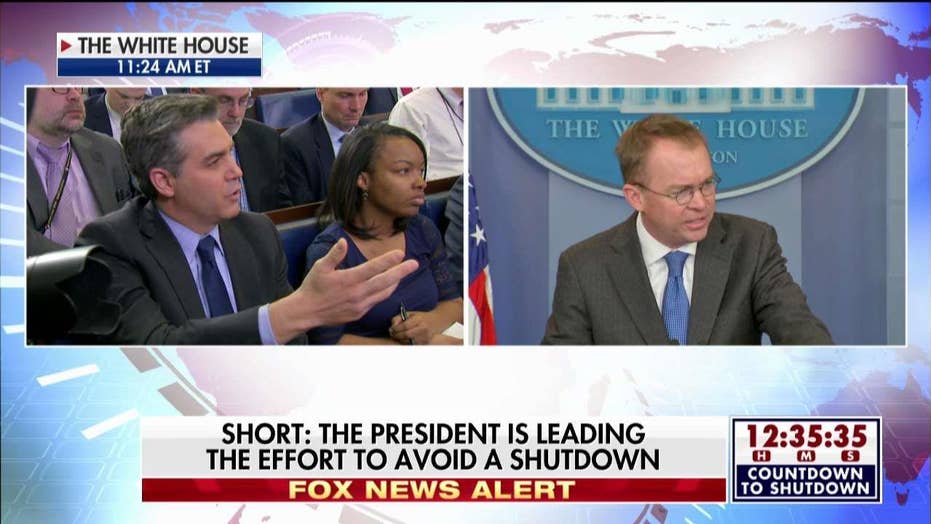 Mulvaney Pushes Back on CNN's Acosta on Shutdown Blame

Yes, CNN staffers have lost their minds. One year of Donald Trump’s America and he’s defeated them as thoroughly the New England Patriots beat, well, just about anybody.

We’re a year into the most-biased U.S. media in history – tracking at 90 percent biased against President Trump. But there appears to be lasting damage to journalists, their professionalism and even their ability to pretend they are rational.

In just one week, CNN staffers blamed President Trump for a man who tried to harm people at their headquarters, ran a piece celebrating cuckolding (not kidding!) and questioned whether the president deserved “credit” for all of the good corporate news of raises and bonuses – resulting from his tax cut.

Celebrity clown and CNN Chief White House Correspondent Jim Acosta had repeated run-ins with whoever the Trump administration put at the podium. In each case, they smacked him down and showed the lack of depth of his reporting.

Office of Management and Budget Director Mick Mulvaney had to explain to Acosta that the reason the government shutdown was the fault of Democrats is because of basic math. The GOP has 51 senators and, Mulvaney told Acosta, “you know as well as anybody that it takes 60 votes in the Senate to pass appropriations bill, right?”

Acosta wannabe and CNN Political Analyst Brian Karem didn’t do any better when talking to the president’s chief economic adviser, Gary Cohn. Karem wondered about how we’ve witnessed, “a litany of – of businesses that are going to give back to the American people, but doesn’t – isn't it unfair to give the president credit for that?”

Cohn smashed back, pointing out that business executives “feel better about the U.S. economy … and they feel like the lower tax rate allows them to share more of their potential earnings with their employees.”

And that leaves out CNN host Christiane Amanpour featuring a Russian LGBT activist who repeated the anti-Trump slur comparing him to Stalin. About as fair as CNN Films releasing its new Ruth Bader Ginsburg documentary “RBG” at the Sundance Film Festival. The film is more like a tribute than journalism. Entertainment Weekly described Ginsburg as “the hottest celebrity” at the festival thanks to CNN’s video press release.

Last, but never least, CNN embarrassment and Anchor Don Lemon found one more way to blame Trump – for the man who made death threats to CNN. Lemon claimed “there’s nothing random about this. Nothing.”

“This is what happens when the president of the United States, Donald Trump, repeatedly attacks members of the press simply for reporting facts he does not,” Lemon said.

Lemon took umbrage at Trump’s use of “fake news” for CNN, somehow forgetting that four of Trump’s Fake News Awards deservedly went to the network.

Blaming Trump is no doubt the reason CNN released another lame apple/banana ad on Friday. The new ad focused on the danger posed by critics who use the First Amendment to call out the press.

“Some people might try to tell you that this is an apple. It might even start as a joke. But when they say it over and over and over again, and people start to believe it, it's only a matter of time before someone gets hurt,” the ad warned. Then the screen flashed to “Facts First.”

Someone should tell the ad creators that, while apples and bananas are different, both can be rotten.

2. What FBI Memo? What Missing Messages? Journalists love to highlight the 18-minute gap in one of President Richard Nixon’s tapes. Give them 30,000 missing emails or 50,000 missing texts and they are less thrilled. Perhaps because both of those involved are liberal.

It was all hands on deck in a desperate quest to control the narrative about the memo and texts. MSNBC’s “Morning Joe” host Joe Scarborough claimed criticism of the FBI amounted to “conspiracy theories” that were “making America less safe.” CNN talked repeatedly about the effort to “discredit” the Mueller investigation.

CBS and NBC tried to spin the story away from the missing texts. But when ABC finally decided to chime in, it went full bore against the GOP. Anchor David Muir echoed Democratic talking points about the FBI text messages: “This is a political battle, and ultimately, the American people will decide whether those personal text messages were appropriate or not.”

3. You Actually Thought Journalists Were Neutral? Part I: The man-bites-dog story is supposed to be the one that makes news. So when a mid-sized daily newspaper ran a pro-Trump editorial, you’d have thought the world ended. Instead, everyone got a reminder of how sausage is made, and it’s awful.

Pittsburgh Post-Gazette reporter Michael A. Fuoco wrote up his side of the subsequent controversy for Columbia Journalism Review. One thing to note, he’s also president of the Newspaper Guild of Pittsburgh/CWA 38061. According to Fuoco, “negotiations with BCI’s union-busting law firm, King & Ballow of Nashville, have become increasingly contentious.” BCI owns the paper. The guild also “filed an Unfair Labor Practice charge against the company” because it changed health-care benefits “in the midst of ongoing, albeit glacial, bargaining.”

So he’s what you might call a bit biased. As are his many fellow union members.

Fuoco quoted the editorial saying: “Calling someone a racist is the new McCarthyism,” and used the opportunity to bash ownership. The same owners who hadn’t agreed to a new contract. “By any objective measure, the editorial was intellectually dishonest and racist, twisting itself in knots in a colossally failed attempt to defend the indefensible,” he wrote

The author then listed how guild members were offended, including several former staffers, such as “the mayor’s spokesman.”

Two quick notes. 1) The mayor is Democrat Bill Peduto. Shocker that his former journalist spokesman is anti-Trump. The last time a Republican ran Pittsburgh was 1934. 2) The guild is part of the Communications Workers of America, which is part of the AFL-CIO. The union endorsed Hillary Clinton for president.

So much for neutral journalism.

4. You Actually Thought Journalists Were Neutral? Part II: The New York Times actually devoted some opinion space to Trump supporters. Naturally, it caused a firestorm with its lefty readers and journalists who think those readers aren’t left-wing enough.

Journalistic operations like the Columbia Journalism Review and the Poynter Institute were joined by HuffPost and others blasting the decision. How dare the Times run content from actual Trump supporters and turn the page into a “welcome wagon” for his supporters, wrote Poynter?

CJR’s attack: “The Times’s pro-Trump editorial page is patronizing and circular” at least admitted that the paper has no pro-Trump voices. “In fact, the Times employs many conservative commentators. It just seems to be a requirement that those commentators are never-Trumpers.”

In fact, it has three “conservatives.” David Brooks is only conservative compared to his coworkers. Relatively new hire Bret Stephens hates the Second Amendment and Ross Douthat wrote, “Why I Can’t Learn to Love Donald Trump” soon after the president took office.

5. To Infinity and Beyond: OK, this was a ridiculous week for journalism. You could hardly move two steps without finding embarrassing proof of media bias or at least evidence of a crazy leftward tilt.

There was InStyle decision highlight its February cover gal Oprah with the caption, “Hello, Madam President? We Asked, She Answered.” This, despite Oprah Winfrey’s repeated claims to the contrary about running.

Self-described “photojournalist” Askia Muhammad revealed he had taken an embarrassing photo of then-candidate Barack Obama with notorious bigot and anti-Semite Louis Farrakhan. Muhammad said he “basically swore secrecy” to protect Obama’s career. Proving once more that neither journalists nor Obama told the truth about who he really was.

The Young Turks network brought disgraced “journalist” Dan Rather on board to host an "untraditional evening newscast." Don’t forget Rather’s failed attempt to take down President George W. Bush with forged documents. That’s the ethical standard the online network is shooting for.