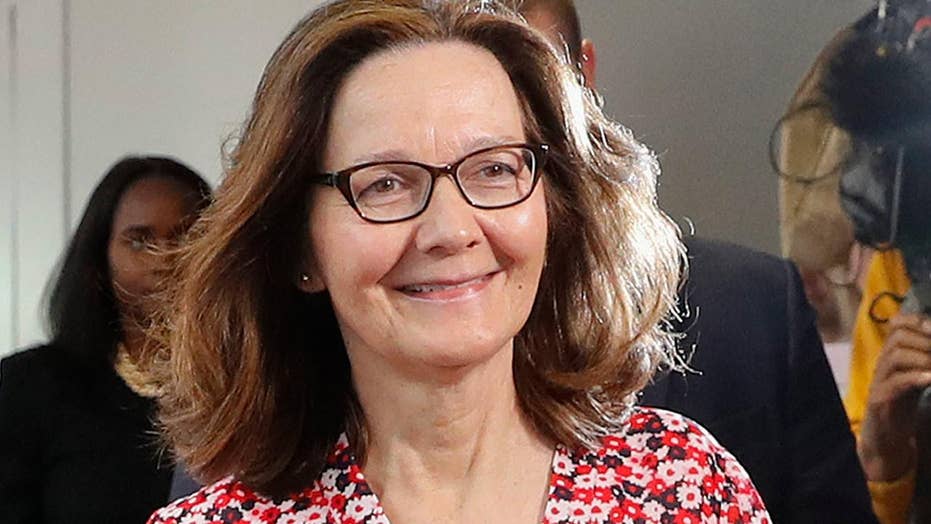 CIA nominee is meeting with senators ahead of confirmation hearing. Catherine Herridge has the story.

President Trump’s nominee for CIA director, Gina Haspel, faces a confirmation hearing before the Senate Intelligence Committee Wednesday, but despite her impeccable track record of success as an intelligence officer she has been hit with an onslaught of attacks from the president’s political opponents.

Isn’t it ironic that those who complain so loudly about the so-called “war on women” are often the ones perpetuating it? If confirmed, Haspel would be the first woman to head the CIA, but Democrats bitterly opposed to anything and everything President Trump does are determined to sink her nomination – simply because she was nominated by this president.

When President Trump nominated Betsy DeVos to become secretary of education we saw the radical left’s visceral hatred for Trump nominees and for conservative women all too well. Democratic senators browbeat DeVos – absurdly claiming that she lacked of qualifications despite her outstanding career as a generous philanthropist who supported charter schools and other innovative educational solutions aimed particularly at benefiting disadvantaged students.

And during a Senate Judiciary Committee hearing on immigration, Sen. Cory Booker, D-N.J., sharply attacked and yelled at Homeland Security Secretary Kirstjen Nielsen, accusing her of “sincere ignorance and conscientious stupidity.” CNN gave him a pat on his back for his “impassioned remarks.”

With this in mind, it should come as no surprise that Haspel has come under immense scrutiny from the left, despite her outstanding career of service to our nation. Haspel has spent more than 30 years at the CIA, earning stellar marks for her work. While one would think that the left – which continuously postures itself as the great champion of women’s rights – would celebrate the historic appointment of the first woman CIA director, the response has been quite the contrary.

Democratic senators – including Ron Wyden of Oregon, Diane Feinstein of California and Martin Heinrich of New Mexico – have thrown around inflammatory statements about Haspel, while hypocritically continuing their narrative that President Trump, and the Republican Party at large, are rife with sexism and misogyny.

If Haspel is confirmed, Senate Democrats know it will expose their political slander of the president and conservatives in general as perpetrators of the “war on women.” Haspel will go down in history as a pioneer for female achievement, and President Trump will be credited with appointing the first female CIA director. Senate Democrats and the leftist media don’t want to allow that to happen.

Haspel, despite her decades of excellent service keeping our country safe, is now at the receiving end of the leftist smear machine, as it attempts to redefine her reputation as some sort of torture queen – simply because she was doing her job and protecting America from its enemies.

Opposition to Haspel began when ProPublica published a story claiming that Haspel oversaw a clandestine base where waterboarding took place, and that she mocked the prisoner’s suffering in a private conversation. This was not true, and ProPublica had to retract parts of its story and apologize to Haspel for its errors.

President Trump defended Haspel when he tweeted Monday: “My highly respected nominee for CIA Director, Gina Haspel, has come under fire because she was too tough on Terrorists. Think of that, in these very dangerous times, we have the most qualified person, a woman, who Democrats want OUT because she is too tough on terror. Win Gina!”

The spiteful attacks against Haspel reveal something particularly troubling about the way the left views women, particularly women who take a strong stance against terrorism.

As a woman who also takes a strong stance against terrorism in the field of national security, I too have experienced visceral attacks from the left firsthand. There is an unmistakable bias that exists from the left that says women are not allowed to be tough on matters of national security. Women are only allowed to function within the ideological box that the left wants them to exist. Any female, or racial minority, who escapes from their politically correct prison must be destroyed.

When the left accuses conservatives of wanting to “turn-back-the-clock” on women, what they’re really saying is that anyone who doesn’t agree with them politically must be painted as a sexist – or if you’re a woman, a traitor.

A strong-minded, intelligent woman such as Gina Haspel is one of the most dangerous threats to the left’s “war on women” narrative, which is thankfully dying a faster death with every hypocritical attack it makes against those of us who choose to think for ourselves.

Brigitte Gabriel, chairman of ACT For America the largest national security grassroots organization in the US. She is the author of two New York Times Best Sellers, "BECAUSE THEY HATE: A Survivor of Islamic Terror Warns America." And "THEY MUST BE STOPPED: Why we must defeat radical Islam and how we can do it."