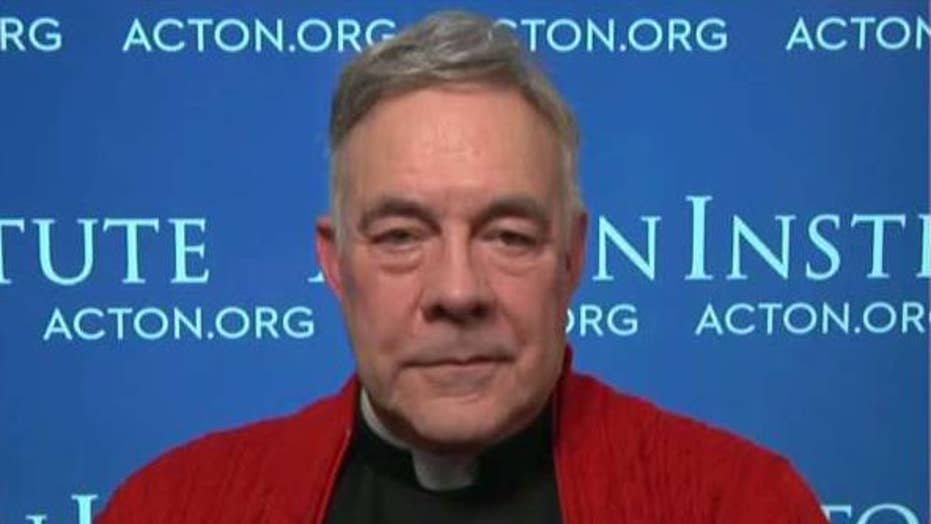 Father Robert Sirico on the search for civility during the holidays

The days leading up to Christmas—even in the midst of a pandemic—are a blur of social and commercial activity.

But the fact of the matter is that Christmas doesn’t begin until Christmas day. Try this at your holiday gathering: ask folks if the 12 days of Christmas come before December 25 or after. Much of this speaks to the continuing secularization of an essentially religious day.

To be sure, people in the pews will hear, as many do each year, sermons decrying the "materialism" of this season. And while those homilists seem to have the right moral intentions, there is something that even the most devout proponents of Christmas may be overlooking—having to do precisely with the material dimension of Christmas.

Christmas is also known as the Feast of the Incarnation—which literally means the enfleshment of the one who is "God with us"—Emmanuel, or Jesus Christ. This celebration’s deepest theological meaning is the reiteration of the goodness of the material world that came forth in the creation "from nothing" by the command of almighty God in the first place. It can be described as the re-embrace of this physical world by the Creator through the coming of his Son as one of us in everything but sin.

A Palestinian National security unit is deployed in Manger Square, adjacent to the Church of the Nativity, traditionally believed by Christians to be the birthplace of Jesus Christ, ahead of Christmas, in the West Bank city of Bethlehem, Wednesday, Dec. 23, 2020. (AP Photo/Nasser Nasser)

That concept set in motion a significant trajectory in the history of ideas. The religion it initiated is not an abstract one; it’s a concrete one. Not a grace offered "bye and bye, in the sky." It is not some messianic version of E.T., who comes from another planet to save an alien people from themselves.

On the contrary, this is one "who comes to his own," born of a daughter of Eve—"blessed among women"—who is herself a pure, uncontaminated Ark of the Covenant in which is contained the very glory of God. It is through her very human agency that he tabernacles himself among us, as the prologue of St. John’s Gospel tell us. In this action, God reclaims the whole of human activity so that every concern of humanity is also his personal concern: Every misery, every joy, every hope, every enterprise is his own. It might even be said that God has a dog in our fight.

This thoroughgoing embrace of the world means that everything about the human story—culture, literature, music, architecture, finance, or any other endeavor—can become the occasion for an encounter with God. The meaning of the Incarnation is that it is not just in a manger that Christ is to be found, but in every computer screen, in laboratories, in department stores, in spaceships, on the floors of stock exchanges, and even—surprise, surprise—on the floor of Congress.

All of this accounts for the monumental contribution Christianity has made to the history of ideas, in science, in medical care, in enterprise, and more. This, in turn, puts a great burden on those who profess the name Christian to assume their day-to-day work not merely as a utilitarian preoccupation, but as a transcendent calling—a vocation. If Christ is really Emmanuel, then he must be with us in this time and place, not just over the rainbow. He is with us as much in the choir stall chanting hymns as he is with a mother in the nursery changing her baby’s diapers.

The problem with materialism is that it doesn’t recognize the eternal kernels in even the most mundane moments of life. It merely settles on the material, and ignores the transcendent. So, Christmas is not commercial even if it is an exchange of God’s love. It is eternal.

From this perspective, we can transform the seemingly simple act of giving and receiving of gifts into acts of homage and adoration—even as the Magi of old did when they searched out the one who came to reflect back to us the eternity written on our hearts. How much like God it is to reveal man to himself—which is, after all, what Christmas does.

As you gather with your family in this holy season, or even if you find you must work an added shift at the hospital or are in any way isolated from others, know that because God saw something of great eternal worth in you, he sent his Son to make of you—of each of us—an immortal splendor.

Rev. Robert Sirico, author of Defending the Free Market: The Moral Case for a Free Economy and the forthcoming The Economics of the Parables, is co-founder and president emeritus of the Acton Institute.