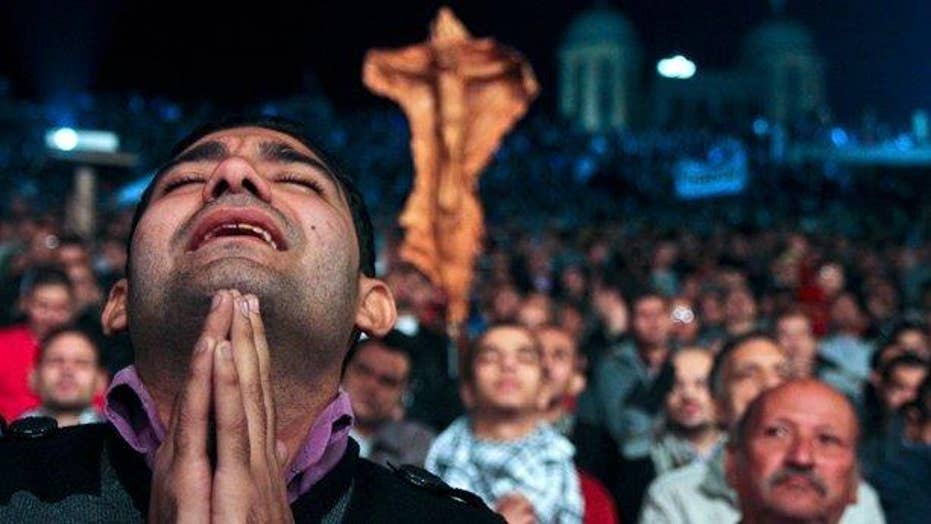 This weekend, ISIS released a video calling for the full elimination of Christianity in Egypt. The star of the video was the alleged perpetrator of December’s terrorist bombing within the complex of Egypt’s most important Coptic church, for Christian persecution in Egypt continues to escalate. In the province of Minya alone there have been more than 75 attacks in the past five years.

ISIS warned us three years ago, “[we will] break your crosses, and enslave your women . . . If we do not reach that time, then our children and grandchildren will reach it, and they will sell your sons as slaves at the slave market.”

Now, the Christian population in Syria stands at less than 500,000, significantly less than the 2 million it was just five years ago. Iraq’s ancient churches and monasteries are in rubble across the Nineveh Plain, and countless people have been displaced and lives have been lost. In Egypt, terrorists must feel especially emboldened: The parliament even passed a law governing the building or renovation of churches in the country.

While politicians, pundits and judges spar over whether religious minorities ought to still be prioritized in the latest iteration of President Trump’s executive order on refugees, Islamic extremists continue to follow through on genocidal threats against Christians.

It is a settled fact that Christians from Syria to Nigeria continue to face an existential threat from varying kinds of Islamic extremists, and this is why both houses of Congress voted unanimously in 2016 to support a genocide resolution against ISIS for the atrocities the terrorist organization has committed against Christians, Yazidis and other religious minorities in the Middle East.

Similar resolutions were passed by the Council of Europe, the European Parliament, the UK House of Commons, the Australian Parliament, the Canadian Parliament, and the French National Assembly. Even Secretary of State John Kerry broke with President Barack Obama to make his own official declaration of genocide against ISIS, noting that Christians had been subject to atrocities “for their faith alone.”

An Egyptian Coptic nun weeps as she looks at damage inside the St. Mark Cathedral in central Cairo, following a bombing in December 2016. (AP Photo/Nariman El-Mofty, File)

Yet, despite this widespread acknowledgement of the genocidal threat faced by Christians, only 77 Syrian Christians were admitted into the United States between January and November 2016, compared to 13,210 Muslims.

Of course, no one is suggesting that the Islamic community is not deserving of assistance as well. In fact, more Muslims have been killed or displaced by terrorists than any other ethno-religious community in the Middle East. It’s just that the Christian, Yazidi and other minority communities have faced the threat of genocide in the Middle East -- of total eradication.

The other consideration, as Rabbis Abraham Cooper and Yitzchok Adlerstein noted presciently in The Wall Street Journal in 2015, remains that “unlike some others, Middle East Christians have nowhere else to go . . . present policy does not take into account the uniquely precarious situation of displaced Christians . . . Christians are profoundly disadvantaged.”

In a less apoplectic time, the prioritization of threatened, religious minorities in President Trump’s executive order would have been applauded by Republicans and Democrats alike.

It still should be.

After all, federal law, as well as the Universal Declaration of Human Rights and the Convention on the Prevention and Punishment of the Crime of Genocide, advises that religious persecution ought to be taken into account when it comes to questions of asylum.

It is ethical and legal for the United States government to provide special assistance to those religious minorities who have been displaced, whose children have been sold into slavery, whose places of worship have been destroyed, and whose countless family members have been thrown into mass graves.

In an attempt to engage in a political fight with the president, some of our leaders threaten their own moral authority. While trying not to discriminate, they would inadvertently choose to discriminate against some of the most vulnerable people in the world, those who have faced the threat of genocide.

It all reminds me of the words of a dear nun I visited in Iraq just after Mosul fell to ISIS in 2014.

She told told me, “I lived in America. You are wonderful people. You care for your pets so well. Can you please care for your Christian brothers and sisters who are suffering? Why are you so silent in the face of our genocide?”

As our leaders debate, I hear her words in my head, “Please help us. Raise your voice for us. Our children are dying.”