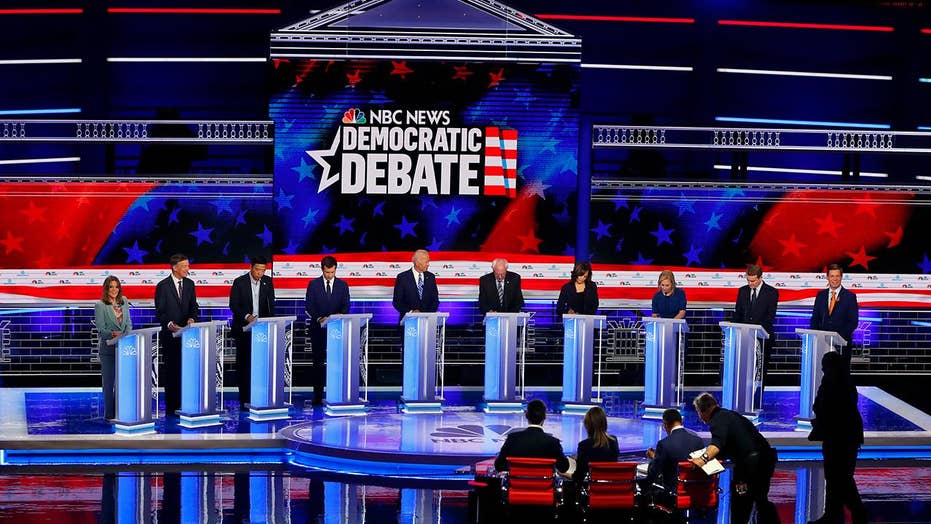 Following her performance in last week’s Democratic presidential debates, California Senator Kamala Harris once again tripped up over the issue of health care. For a second time, Harris attempted to claim that she would not eliminate private health coverage. In reality, however, virtually all Democrats running for president would enact policies jeopardizing Americans’ health insurance. The candidates differ largely in their level of honesty about their proposals’ effects.

During the debates on Wednesday and Thursday, only Harris, New York Mayor Bill DeBlasio, Massachusetts Sen. Elizabeth Warren, and Vermont Sen. Bernie Sanders said they supported eliminating private insurance. But in an interview Friday morning, Harris claimed she heard the question as asking whether she would give up her insurance, not whether she would take others’ coverage away.

The facts defy Harris’ lawyerly parsing. Section 107(a) of the bill that Sanders introduced, and which Harris, Warren, and New Jersey Sen. Cory Booker have co-sponsored, would make it “unlawful for a private health insurer to sell health insurance coverage that duplicates the benefits provided” under the legislation.

In May, Harris claimed that Sanders’ legislation would permit private health insurance to supplement the government-run program. But as CNN’s Jake Tapper pointed out at the time, Sanders’ bill would provide such comprehensive benefits that supplemental coverage could only cover treatments like cosmetic surgery. It raises an obvious question: Who would want to buy “insurance” covering breast implants and Botox injections? Harris’ Hollywood constituents, perhaps, but few middle class Americans.

While most of the other candidates say that they want to preserve private coverage, their policies would do the exact opposite.

Other candidates have similarly tried to disguise their intentions when it comes to taking away Americans’ health coverage. During last week’s debates, New York Senator Kirsten Gillibrand—another co-sponsor of Sanders’ legislation to make private coverage “unlawful”—did not raise her hand when asked about eliminating health insurance. She said she supported a government-run “public option” instead: “I believe we need to get to…single payer. The quickest way you get there is you create competition with the insurers.”

But individuals with private coverage cannot, and should not, rest easy. The fact that Gillibrand says she supports a government-run health system as an eventual outcome means that she would work to sabotage the private health insurance system, to drive all Americans into a government-run program.

Even Democratic candidates who claim they oppose Sanders’ single-payer legislation have proposed policies that would eventually lead to such a government-run health system. In Thursday’s debate, Colorado Sen. Michael Bennet claimed that his proposal for a “public option” “could easily” see 35 million people enroll. Bennet proved off in his estimate by only about 100 million individuals. In 2009, the Lewin Group estimated that a plan similar to Bennet’s could enroll as many as 131.2 million Americans.

A review of Bennet’s legislation demonstrates how it would sabotage private coverage, by giving the government plan major structural advantages. Bennett’s bill grants the government plan $1 billion in start-up funding from taxpayers—with additional bailout funds likely should the plan ever run into financial distress. It would require all doctors participating in Medicare to join the government plan. And it would pay doctors and hospitals the much lower rates that Medicare pays, even though nearly three-quarters of hospitals lost money on their Medicare patients in 2017.

Among the Democrats running for president, Sanders has remained outspoken in his desire to take away Americans’ health coverage, and ban private insurance. While most of the other candidates say that they want to preserve private coverage, their policies would do the exact opposite. Just as Barack Obama eventually had to apologize for his infamous “If you like your plan, you can keep it” broken promise, so too will most of this year’s candidates have to explain why American families couldn’t keep their insurance if and when their policy plans go into effect.

In accepting his party’s nomination for president at the 1984 Democratic National Convention, Minnesota Senator Walter Mondale infamously claimed that “[Ronald] Reagan will raise taxes, and so will I. He won’t tell you; I just did.” Thirty-five years later, virtually all Democrats have embraced a position almost as unpopular as raising taxes: Taking away Americans’ health insurance. Unlike Mondale, most of this year’s candidates won’t tell you the full truth about their policies. I just did.

Chris Jacobs is the CEO of Juniper Research Group and author of "The Case Against Single Payer." He is on Twitter: @chrisjacobshc.