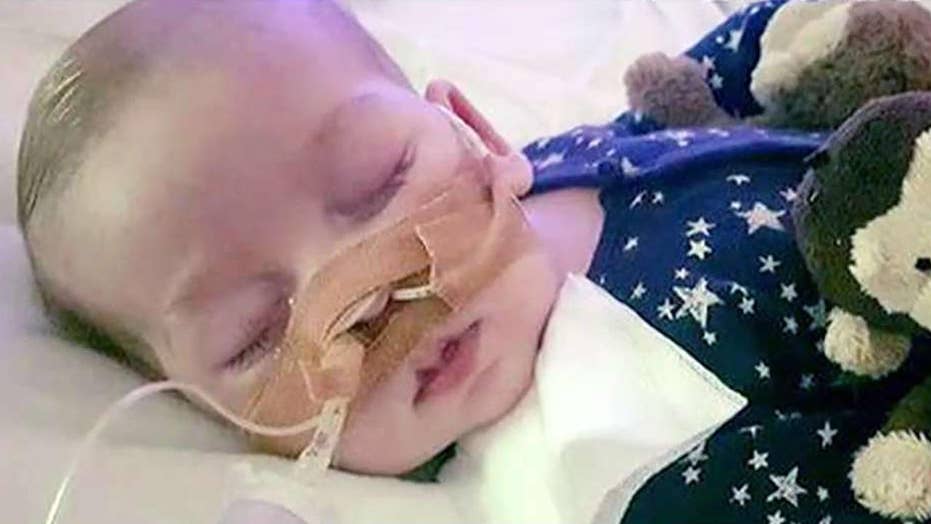 Charlie Gard is eleven months old. He has a rare brain disease.

There is a chance that his life could be saved -- at a hospital in America -- a hospital that could provide an experimental treatment.

Charlie's mom and dad raised hundreds of thousands of dollars for the journey.

But the British courts said no -- a judge ruled that doctors could take the little boy off life support without parental consent. The doctors say there is no hope - Charlie cannot breathe on his own - and he has brain damage. And they say the boy's parents have no right to determine his fate.

Charlie's mom and dad are devastated.

The European Court of Human Rights declined to hear the case -- in essence handing down a death sentence. It's ironic that a court that oversees Human Rights - does not believe Charlie Gard has a human right to live.

This is an undated hand out photo of Chris Gard and Connie Yates with their son Charlie Gard provided by the family, at Great Ormond Street Hospital, in London. The president of the United States has offered to help. The pope is willing to have the Vatican hospital take him in. Some 1.3 million pounds ($1.68 million) have been raised to help him leave Britain for treatment. But little has changed Tuesday July 4, 2017, for Charlie Gard, a terminally-ill British infant suffering from a rare genetic disease that has left him severely brain damaged. (Family of Charlie Gard via AP) (AP)

They do not believe that Charlie's mom and dad have a right to decide what is best for their child. The court believes the responsibility rests with the doctors in white coats. And the doctors believe that it would be in Charlie's best interest if he simply died.

The pope has tried to intervene -- so has President Trump -- urging the British government to have mercy. But so far -- their pleadings have fallen on deaf ears.

So as it now stands - Charlie Gard could very well be dead before his first birthday - sentenced to death by the British government -- because doctor's believe that's what's best.