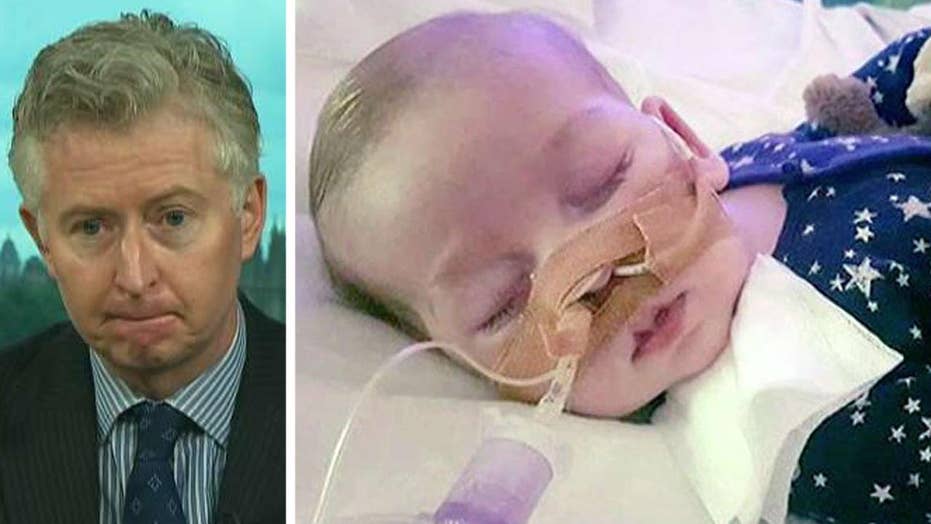 The case of 11-month old Charlie Gard is bringing out the worst in the “Death with Dignity Movement.” By appointing Victoria Butler-Cole, a death with dignity advocate, as the lawyer representing Charlie in court against his parents, the death with dignity movement has crossed the line from advocating for individuals’ wishes to projecting its views onto innocent children who are too young to have indicated that “death with dignity” is something they want.

Charlie Gard, an 11-month-old living in the UK, has an extremely rare mitochondrial disorder. An experimental treatment exists that has a chance—although a small chance—at recovering his muscle function and allowing him to have a happy life. His parents will be in court Thursday asking the court to allow him to receive this experimental treatment. His hospital and others argue that the treatment is too experimental—that it has only been tested in a lab—but the same hospital has used equally-experimental treatment before.

Charlie’s de-facto lawyer, Victoria Butler-Cole, once represented Lindsey Briggs in the High Court, who argued that her husband would have preferred to be taken off life support. Paul Briggs had not written a do-not-resuscitate (DNR) order. The court ruled to give Briggs palliative care only, and it was the first time that a court ruled to withdraw food and water from a clinically stable patient.

When did we decide as a global society that an infant would rather die comfortably than fight for his life? We didn’t. Charlie Gard is obviously fighting to stay alive, which indicates to me that he has the will to live.

It is hard to argue with a consenting adult who says they are in so much pain that they want to end their lives comfortably. Those advocating for “death with dignity” feel they act in individuals’ best interest by advocating for access to palliative care, do-not-resuscitate (DNR) orders, or euthanasia.

But in the case of Charlie Gard, the legal system has put Charlie Gard’s fate into the hands of the Death with Dignity movement. Individuals who believe that a comfortable death is more desirable to a life on a ventilator and medical treatment have been appointed to represent Charlie Gard. Furthermore, the court has put the burden of proof on Gard’s parents to prove that the treatment they want for their son is not harmful, that Charlie is not in pain, and that Charlie is growing like a typical child.

When did we decide as a global society that it is always better to die comfortably than to undergo medical treatment? We didn’t. As support for Charlie’s case grows around the world, as parents of children with similar conditions (and at least parents of one child with the exact condition as Charlie) advocate for Charlie’s access to treatment, it is evident that most people support hospitals taking every measure to save a life: that death with dignity should be the last resort.

And when did we decide as a global society that an infant would rather die comfortably than fight for his life? We didn’t. Charlie Gard is obviously fighting to stay alive, which indicates to me that he has the will to live.

Unless someone has written a do-not-resuscitate order, or their closest relative testifies that they prefer death with dignity, shouldn’t we continue with our initial assumption as a society that an individual prefers to live? Hospitals should do their job and provide every treatment possible to a sick patient or transfer a patient to a hospital who will.

The judge in Charlie Gard’s court proceedings Monday acknowledged that the Children Act of 1989 says the child’s welfare should be the court’s “paramount consideration.” If the death with dignity movement can convince a court that it is in a child’s best interest to be deprived of life-saving treatment and allowed to die without air, food, or water, then the future of our children’s health care as we know it is in dire danger.

Gia Behnamian is an independent writer and policy analyst in Washington, DC.