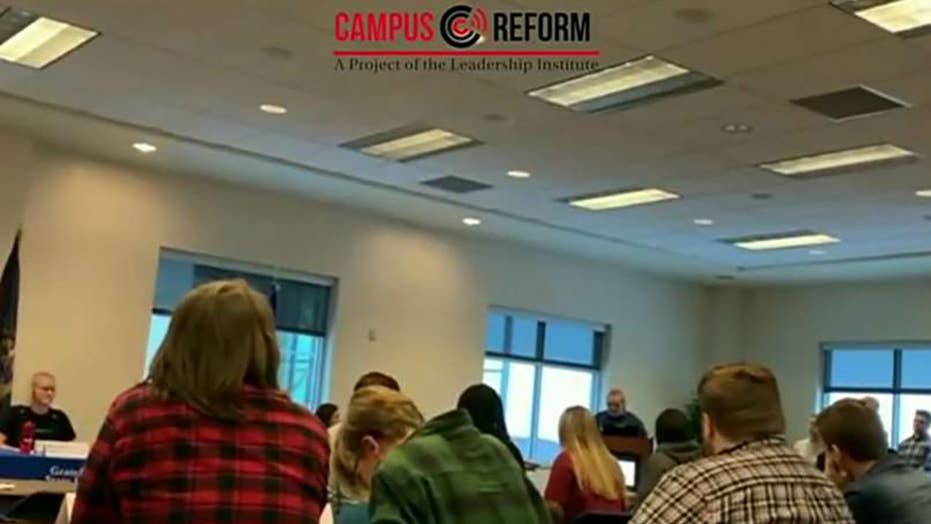 University skips pledge to be 'accepting of all students' reaction from Campus Reform editor-in-chief Cabot Phillips.

Grand Valley State University’s student government became the latest in a growing list of groups to stop reciting the Pledge of Allegiance at meetings because the pledge isn’t “inclusive” enough. Though the vote at the Michigan university in early November was reversed a week later after a national backlash, student senators still maintained that offering an oath of loyalty to a nation that "oppresses" its own people is unacceptable.

While these college students sitting in taxpayer-funded classrooms wallowed in their “oppression,” students at Hong Kong’s Polytechnic University were under siege from the Chinese military for daring to stand up for human rights.

The juxtaposition between real and imagined oppression w`ent unnoticed — or was intentionally ignored — as Grand Valley’s students claimed anyone failing to see mass oppression in America is blinded by privilege.

Ironically, the same students accusing others of being blinded by privilege fail to observe the glaringly obvious privilege they themselves enjoy: American Privilege. That is, the unique privilege of living in a country that actively protects the rights of its people to criticize their government without fear of repercussions.

The growing idea that America is a land of oppression rather than freedom is the symptom of a culture that incentivizes victimhood by bowing down to anyone claiming to be disadvantaged. Having spent the past half-decade following trends on college campuses, I’ve seen first-hand the environment this type of culture has fostered.

Most college freshmen arrive on campus as 18-year-olds, eager to fit in. They observe the social hierarchy and quickly note that those at the top are the individuals who can lay claim to being the most oppressed.

That victim status offers immunity from foes, praise from peers, and garners special treatment from those in authority, namely school administrators. Oppression is the currency in today’s social economy, and business is booming.

However, the ultimate praise on campus is reserved for those who can claim oppression while simultaneously combating it themselves. The role of “social justice warrior” is now a tantalizing one for a young student looking to fit in.

The only thing missing is often the social injustice itself. Thankfully for these self-identified warriors, the actual presence of oppression and injustice isn’t necessary to receive validation — all that’s needed is the claim that it exists.

Every superhero needs a villain, and upon hearing each day in class that the United States is a genocidal country with a predominant legacy of racism and bigotry, it’s easy for these young, passionate minds to settle on America itself as their foe of choice.

Soon the idea of being proud of such a country, let alone pledging allegiance to it, becomes unconscionable.

Such melodramatic views would be comical it they didn’t harbor dangerous repercussions for the future of the United States.

While the problems these students claim to face are often fictitious, their proposed solutions are very real, and pose a serious threat to our society as a whole. Freedoms we assume to be unassailable – like freedom of speech, assembly, and religion – are now under attack.

This year alone, we’ve seen students demand their freedoms be taken away, all in the name of inclusivity and social justice. Whether it’s the implementation of restrictive speech codes and bias response teams, or mass protests against student newspapers for daring to reach out for comment from both sides of the political aisle, students increasingly view freedom not as a privilege, but as a burden to carry.

These students are OK sacrificing their rights in exchange for the perceived feeling of emotional safety this offers.

We cannot stand idly by while the next generation carves away at our freedoms in the name of social justice. At the crux of this alarming trend is academia at all levels.

We need to educate young people on what our flag truly represents – liberty and justice for all – and help them to see the privilege they enjoy living in the United States. Only then can we hope that they channel their passion towards protecting the principles that have made us the freest, most equitable nation in human history.

Members of the next generation won’t preserve our freedom for the future and carry on our aspirational creed if they don’t think it’s anything worth preserving.

Cabot Phillips is the editor-in-chief of Campus Reform.