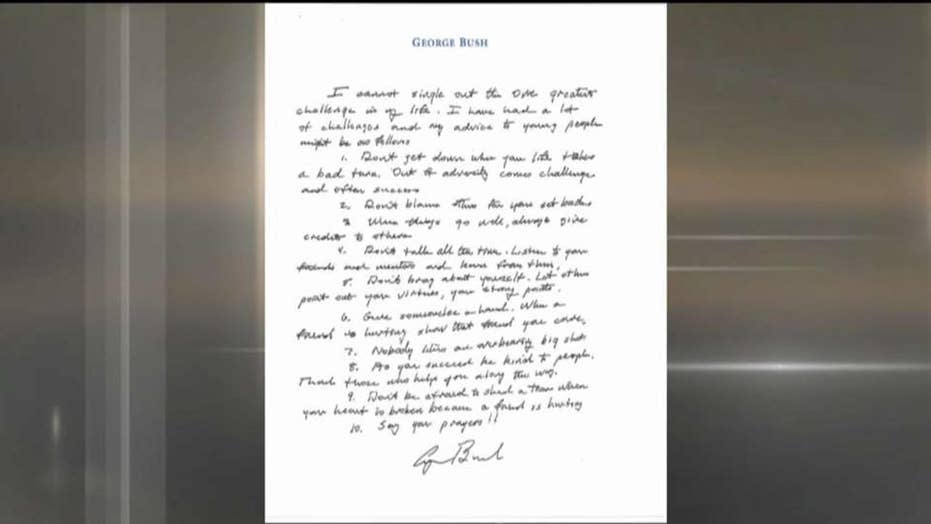 As I was preparing this week to co-anchor the Fox News live coverage of President George H.W. Bush’s state funeral alongside Martha MacCallum, I was combing through notes and emails from Bush family friends and former administration officials who had been watching our coverage since President Bush’s passing Friday night.

I came across one email from a friend of mine who is a very close friend of the Bush family from Maine, former IBM CEO Sam Palmisano.

I had missed Sam’s email Monday night. It included just a few lines and an attachment. It read, “41 sent this to me in December of 2009. It says all anyone needs to know about his values. Great coverage today, Sam.”

I opened the attachment to find a handwritten note from President Bush to Sam in 2009 about the president’s advice for young people. I read it and immediately thought to myself, “I need to find a way to read this on air during our funeral coverage tomorrow.”

I emailed Sam back and got his permission to share the letter with our viewers. He said that’s why he sent it to me. He said that although he couldn’t be on air with us at the National Cathedral, since he would be seated inside the service with the Maine contingent, he was happy it could be aired.

I had a full-screen graphic of the letter made and when the time was right before Karl Rove came on to talk about his recollections of “41”  I read all of the letter – word for word.

“I cannot single out the one greatest challenge in my life. I have had a lot of challenges and my advice to young people might be as follows

Don’t get down when your life takes a bad turn. Out of adversity comes challenge and often success

Don’t blame others for your setbacks

When things go well, always give credit to others

Don’t talk all the time. Listen to your friends and mentors and learn from them

Don’t brag about yourself. Let others point out your virtues, your strong points.

Give someone else a hand. When a friend is hurting show that friend you care

Nobody likes an overbearing big shot

As you succeed, be kind to people. Thank those who help you along the way

Don’t be afraid to shed a tear when your heart is broken because a friend is hurting.

Sam Palmisano is right. This IS the essence of President George H.W. Bush the man – his humility, his humanity. And after I listened over the past few days to his dear friends, people who worked for him, or just acquaintances who had encounters with the 41st president, THIS is “all anyone needs to know about his values” and frankly it IS his legacy.