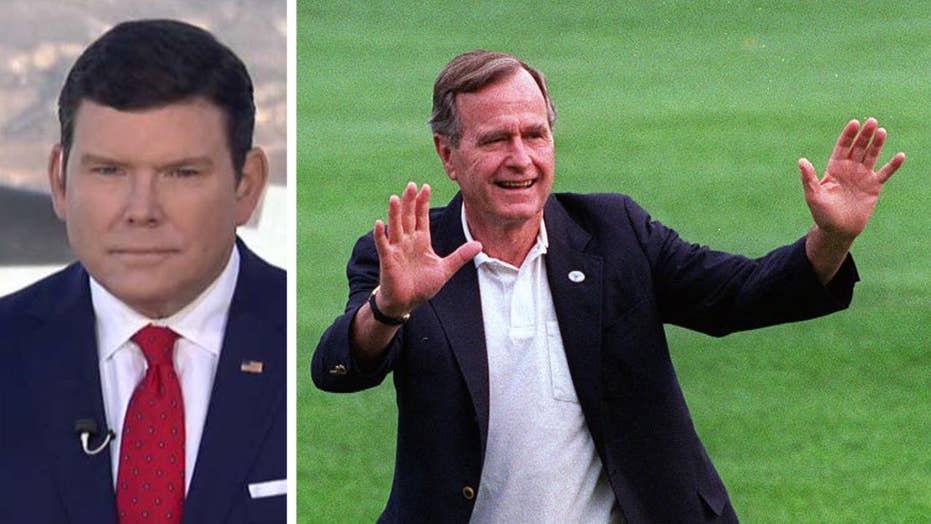 Baier on George H.W. Bush's response to end of the Cold War

President George H.W. Bush’s death at age 94 will inspire an outpouring of praise for his lifetime of service and his impact on the nation and the world. But beyond his many accomplishments in life and in office, perhaps President Bush will be remembered most for the man he was.

The quality many people admired about Bush was his humanity – as a Texan might describe it, he didn’t put on airs. Even as president he chafed at the reverential treatment he received, and he was always looking for ways to put people at ease. He might have preferred it if everyone just called him George. After his son became president, he’d phone people and identify himself saying, “This is 41.”

Last year, reflecting on the qualities that make a good president, Bush said that humility was the most important for anyone who aspired to the highest office in the land. He didn’t mean humility as self-effacement, but as a sincere respect for others and an acknowledgment of his place in the world -- which, being a man of faith, he would have said was modestly standing before God.

It was a big part of his appeal that Bush never saw himself as a towering person in American life. After he left office, his aides tried to steer him into “big and important” work, but as he wrote to one of them: “I don’t have myself cast as a big and important person. I want to be a tiny point of light. … I don’t crave sitting at the head of the table.”

That quality was present when he was in office as well. As historian Jon Meacham recounts in his book “The American Odyssey of George Herbert Walker Bush,” his humility guided him during some of the nation’s most difficult crises.

When President Ronald Reagan was wounded in an assassination attempt shortly after taking office, Vice President Bush was traveling. On the plane returning to Washington, he was determined not to be officious or take charge in a disrespectful way while “my friend” Reagan was fighting for his life. When John Matheny, his Air Force aide, suggested that he land on the South Lawn instead of at Andrews Air Force Base so he could get to the White House more quickly, Bush refused. “John,” he said, “only the president lands on the South Lawn.”

He brought that same demeanor into the White House as president, and it could frustrate his aides. When the Berlin Wall fell in 1989, his press secretary, Marlin Fitzwater, rushed to the Oval Office, eager to craft a powerful speech about the victory of democracy. To his dismay, President Bush seemed oddly disinterested in making a big deal about what seemed to Fitzwater to be a very big deal.

Nothing could convince him to appear before cameras. “Listen, Marlin,” he finally said. “I’m not going to dance on the Berlin Wall. The last thing I want to do is brag about winning the Cold War, or bringing the wall down.” He endured a great deal of criticism in the press for what was viewed as a lack of enthusiasm, but he refused to score political points when he still had tough negotiating to do with the Soviets.

In this way, with quiet dignity and resolve, he presided over the end of the Cold War. During Mikhail Gorbachev’s final, difficult period, before the collapse of the Soviet Union, President Bush extended a hand of friendship without giving anything away.

Inviting Gorbachev to Camp David, he drove him in the presidential golf cart – Golf Cart One – to one of his favorite spots, the horseshoe pit. Bush asked Gorbachev if he’d ever played horseshoes, and Gorbachev said he hadn’t. Right then and there, Bush suggested a game.

Gorbachev agreed, and got a ringer on his first throw. Bush, who was usually very competitive about sports, was pleased to see the man who was his counterpart and sometimes his adversary score a win. He had the horseshoe mounted on a plaque, which he presented to Gorbachev at dinner that night.

He was also there for Gorbachev at the very end. On Christmas Day 1991, as Gorbachev prepared to face the cameras and resign, he sat in his office and called Bush, who was celebrating Christmas with his family at Camp David. Bush offered words of comfort and said he hoped they would meet again, perhaps at Camp David -- where the horseshoe pit was ready for another game.

His simple human kindness made a lasting impression on Gorbachev. Now ailing himself, Gorbachev was one of the first to send a tribute on learning that Bush had died. He cited their partnership at the end of the Cold War, but also noted how he and his wife Raisa “deeply appreciated the attention, kindness and simplicity typical of George and Barbara Bush, as well as the rest of their large, friendly family.” Again, it’s the humanity people remember.

I last saw “41” in 2017 at a golf tournament in Maine. He pulled up riding shotgun in a golf cart driven by a Secret Service agent and said, “Good to see you, Bret – good golf swing.” He gave me a thumbs-up with a big grin and then drove on. I would have liked to stop playing and ask him a million questions after having researched and written about his time as vice president and president during the fight against communism. But I didn’t have the opportunity.

I later asked his son – “43” – how his dad was doing, and President George W. Bush told me his father was happy, having lived a full life. A little more than one year later, and a few months after losing his beloved wife, Barbara, George and Barbara Bush are together again, and the nation mourns the loss of one of the most polite and honorable politicians of our time.

In the coming days, as the tributes pour in, I expect that many of them will detail the simple moments that defined George H.W. Bush – his love of family, his faith, his humility and his moral character. This will be his greatest legacy.