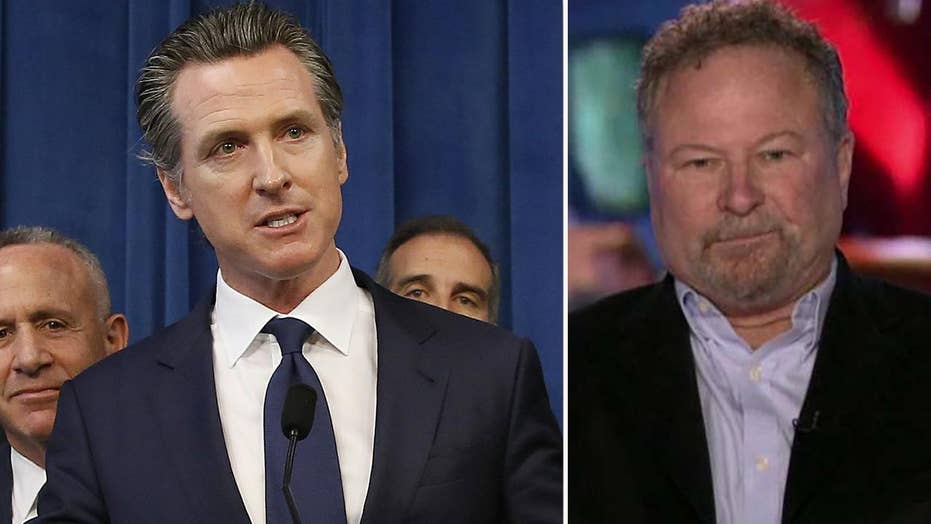 There are now 22 Democrats seeking their party's presidential nomination to run against President Trump in 2020.

As the president takes to Twitter to fend them off in the same style he used to defeat 16 Republican rivals in 2016, there is another Democrat who may prove to be a bigger thorn in his side: California Gov. Gavin Newsom.

While Trump was announcing the cessation of aid to Central American countries earlier this month, Newsom was there, meeting with the president of El Salvador and the U.S. ambassador.  He was carrying the opposite message, expressing the importance of U.S. aid.  “America needs leadership internationally,” he said. “California will assert itself if this administration wants to walk away.”

International aid and immigration are normally handled by the federal government. But throughout his political career, Newsom has shown an incredible ability to disregard tradition and law to forge forward with his own agenda in an autocratic way.

As mayor of San Francisco in 2004, Newsom openly violated state law and ignored the will of the people when he authorized his office to issue marriage licenses to same-sex couples.

Just a few years earlier. Californians had passed Proposition 22, which declared that only marriages between a man and a woman would be valid in the state. Newsom dared his opponents to beat him in court. He won. The U.S. Supreme Court ultimately ruled that same-sex couples must be treated the same as heterosexual couples.Newsom became the Martin Luther King of gay marriage.

Emboldened by this success, Newsom has embarked on a pattern of ignoring existing law -- a pattern that has become more and more brazen, yet every bit as successful.

He was the face of the successful referendum to legalize marijuana in California in 2016. The next year, as a result, he took in hundreds of thousands of dollars in campaign contributions from the cannabis industry, all despite the fact that it was and continues to be illegal under federal law.  And he is winning. Additional states have since followed California, and the U.S. Department of Justice thus far has not interfered.

Upon becoming governor. Newsom declared California a sanctuary state, ignoring federal immigration laws. In February, he modified the state’s “bullet train” project because “there simply isn’t a path to get from … San Francisco to LA,” and the “project, as planned would cost too much and respectfully take too long.”

Instead of abandoning the “green” project, he announced a new plan to complete a train between Bakersfield and Merced, using $9.95 billion in funds approved by California voters in Proposition 1A for a train linking San Francisco to LA.  Newsom knows voters would never have approved billions for a train from Bakersfield to Merced.  But, to date, his move has not been challenged in court.  Winning again!

In March, Newsom signed an executive order setting a moratorium on the death penalty, giving a reprieve to 737 criminals who had been given the death sentence through California’s judicial system. As in the past, this act came just three years after California voters rejected an initiative to end the death penalty, instead passing a measure to speed up executions. And it was just after he assured voters on the campaign trail that he would, in fact, enforce the death penalty. Again, no court action to challenge him.

Newsom is only a few months into what will assuredly be an eight-year governorship (unless he becomes president sooner). He has a very ambitious agenda: universal preschool, free community college, universal, single-payer health care (including for illegal immigrants), expanded housing credits/support for the homeless, and expanded gun control.

Based upon his track record of pushing forward irrespective of the law or the expressed will of the people, there can be little doubt that he will achieve these objectives and more. The style may even work to achieve his objectives in Central America.  It certainly is a form of governing not new to the people in that region.

Jim Breslo is an attorney, host of the "Hidden Truth Show" and founder of RealKast, a new media company. He was formerly a partner at the international law firm Seyfarth Shaw, defending companies and individuals against alleged civil rights violations.