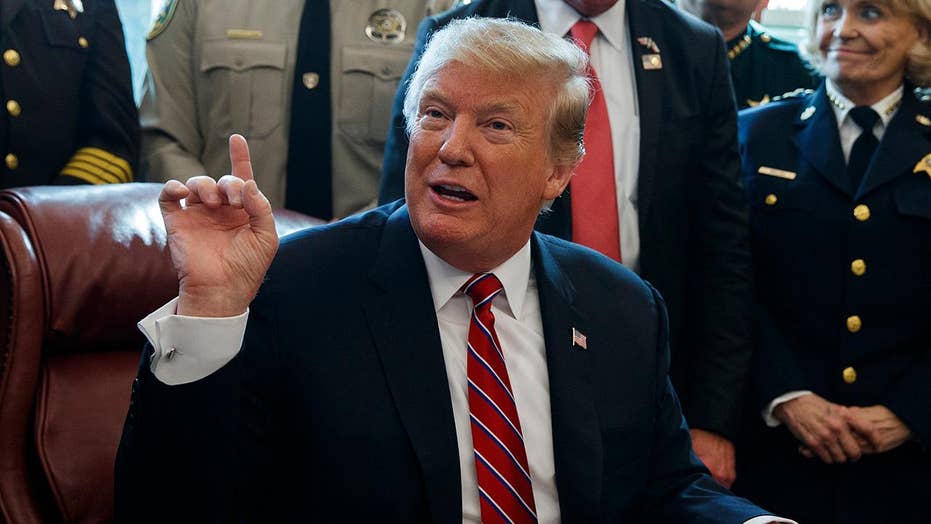 Trump issues first veto of his presidency over border security; reaction and analysis on 'The Five.'

President Trump was right Friday to veto an attempt by Senate and House Democrats to prevent him from using his national emergency powers at the border.

Consider that from Jan. 20, 2009 until Jan. 5, 2011 the Democrats controlled the White House, the Senate and the House with nearly a supermajority, including two independents who caucused with the Democrats.

But despite this power, President Obama and the Democrats refused to tackle immigration reform – an issue they claimed to care deeply about. In fact, the only major piece of controversial legislation they tackled during this time was health care reform – the hallmark of President Obama’s first campaign.

Why? Because of politics.

President Obama and the Democrats were too worried about re-election. They knew a majority of Americans were against immigration reform without securing the border first, so they punted.

To deny there is no current crisis on the southwest border is like denying water is wet. The number of illegal border crossers, the amount of drugs and the number of deaths in the United States from those drugs are all a testament to our current crisis.

Instead of doing what they claimed to be right, they did what they thought was politically expedient.

Case in point: Although Obama and the Democrats ducked immigration reform in his first term, Obama lost all inhibitions in his second term when he was a lame duck president with nothing to lose.

Not only did President Obama – out of fear – fail to do what he thought was right regarding immigration in his first term. While a lame duck and with nothing to lose, he signed unconstitutional executive orders.

President Trump is different. He’s proven that the specter of a re-election fight isn’t enough to stop him from doing what he believes is right.

Unlike Obama, Trump has shown an absolute willingness to tackle controversial issues in his first term. But President Trump does it within the confines of the law, as the Supreme Court’s ruling on his travel ban showed.

More recently, pursuant to the National Emergencies Act – which provides him the power to take action when he feels the nation is threatened by a crisis, exigency, or emergency circumstance –Trump has elected to act in his first term. He declared a national emergency on the U.S. border with Mexico.

The National Emergencies Act gives Congress the authority to pass a resolution striking down an emergency declaration with a majority vote. But that action is supposed to be based on whether lawmakers feel an emergency or crisis exists – not on the perceived constitutionality of the declaration.

Only the Supreme Court can determine if the declaration is constitutional.

Sen. Ted Cruz, R-Texas, said it best. “Today the National Securities Act required the Senate to answer one question,” he said. “Whether there is an ongoing emergency at our southern border.”

And this is where all the Democrats and a dozen Republicans in the Senate are wrong.

To deny there is no current crisis on the southwest border is like denying water is wet. The number of illegal border crossers, the amount of drugs and the number of deaths in the United States from those drugs are all a testament to our current crisis.

Congressional opposition from the Democrats was expected. We live in a political world and they played politics.

But the 12 Republican senators who voted with the Democrats to strike down the declaration of a national emergency took it upon themselves to do the Supreme Court’s job. They claimed they were guarding against presidential overreach while exercising congressional overreach themselves.

Instead of taking it upon themselves to decide constitutionality, the 12 Republicans should have remained within the law and answered the one important question of whether an emergency at the border exists.

President Trump was right to veto the resolution and I applaud him for his decision. He is acting in accordance with the law, while at the same time showing great strength in tackling the illegal immigration debate head-on, in his first term.

The president is intent on doing his part to end this debate once and for all. As for the 12 overreaching Republicans, they should have waited for the courts to ultimately decide the scope of the president’s power.