The reasons for her resignation are unknown, and may never be known. The Black Lives Matter Global Network Foundation, the main organization known as Black Lives Matter, has all the transparency of the Kremlin during the Brezhnev years.

In her resignation video, Cullors said she was quitting as the group’s executive director to spend more time with her family (her 5-year-old son) – a statement that shows how far the radical group has come in becoming part of the political furniture.

VICTOR DAVIS HANSON: AMERICAN MADNESS OF 2020 – WILL HYSTERIA CONTINUE IN POST-COVID US?

Had this been said by a balding White politician from Owatonna, the press would be busy looking for embezzlement or at least a mistress. As it was, CNN published an article that read like a press release from BLM GNF HQ.

In fact, Cullors resigned amid allegations of financial improprieties, criticism of her purchase of million-dollar homes, and a radical leftward turn that saw her asking two months ago for not just the elimination of the police force, but also of jails, prisons and the court system. All of that has led to tanking public support for BLM.

Cullors spent a tumultuous 10 months as executive director of BLM GNF, a July 2020 appointment that, with typical opacity, was announced in September.

The financial allegations are what one would expect. This April, The New York Post reported that in 2019, a lobbying group Cullors co-founded "doled out $346,558 – more than a quarter of its budget – to companies controlled by Khan-Cullors and her wife, as well as to writer Asha Bandele and Damon Turner, the father of her young son." The Post cited "the PAC’s campaign finance statements obtained by The Post."

Activists have also complained to NBC that the money BLM has raised in its more than seven years of existence, but especially since BLM organized nationwide protests and riots after the killing of George Floyd last year, should have gone to Black families.

"That is the most tragic aspect," the Rev. T. Sheri Dickerson, the head of an Oklahoma City BLM chapter, told NBC. "I know some of (the families) are feeling exploited, their pain exploited."

Instead, the Post reported that Cullors had gone on a house-buying spree that saw her snap up four high-end houses worth $3.2 million in total. In typical fashion, the paper's headline read "Black Lives Mansions."

That opulent lifestyle has in no way diminished the communist instincts of the woman who once described herself as a "trained Marxist" (which is true: she was recruited and trained by Eric Mann, a former member of the Weather Underground terrorist group who still seeks world revolution).

Cullors described the radical goal this way: "Abolition is the getting rid of police, prisons and jails, surveillance, and courts."

In February, Cullors released a video that wrapped BLM GNF under the banner of "abolition." If that sounds odd, since that goal was achieved by Lincoln in 1863, it’s because, when used by communists, abolition means something else.

In fact, Cullors described the radical goal this way: "Abolition is the getting rid of police, prisons and jails, surveillance, and courts." 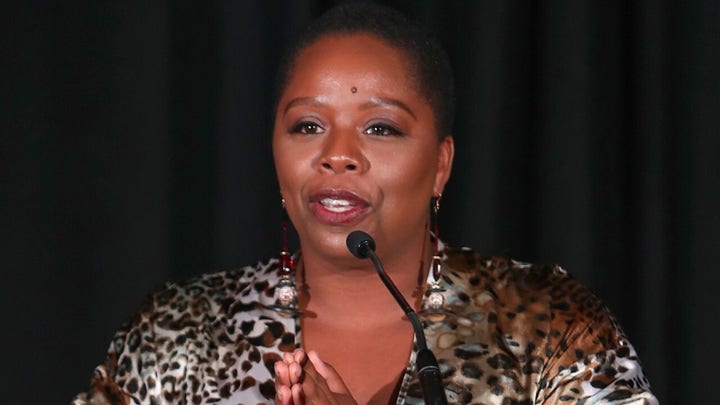 As Grove City College Professor Paul Kengor writes in "The Devil and Karl Marx," "The word ‘abolition’ is omnipresent throughout Marx’s writings. As [Marx scholar] Robert Payne noted, the word almost seems to jump off every page of the Manifesto. ‘And after he has "abolished" property, family, and nations, and all existing societies, Marx shows little interest in creating a new society on the ruins of the old.'"

Just to make sure everyone got it, Cullors in her February video praised her mentor, Angela Davis, as one of her "favorite abolitionists." Davis, you’ll recall, ran twice for Vice President on the Communist Party ticket and was awarded the Lenin Peace Prize by the ruthless East German regime,

Not for nothing are BLM’s ratings tanking.

Apparently some of those well-intentioned Americans who put BLM signs on their lawns have buyers’ remorse after learning the true nature of BLM. They sent plenty of money in the interim, however. A 2020 Impact Report published this year said the organization had raised over $90 million in 2020 alone, and listed all the accomplishments – the lobbying, "Hamilton," etc.

It’s not clear if Cullors’ resignation means she will fade away. Along with Alicia Garza and Opal Tometi, also committed Marxists, Cullors founded BLM in 2013 after a jury found George Zimmerman not guilty of murdering Trayvon Martin. But even if she does go away, don’t expect that to mean a softening of BLM’s radical agenda. That’s baked in.

Mike Gonzalez is a senior fellow in The Heritage Foundation's Allison Center for Foreign Policy and the Angeles T. Arredondo E Pluribus Unum fellow. His most recent book is "The Plot to Change America: How Identity Politics is Dividing the Land of the Free" (Encounter Books, July 28, 2020).