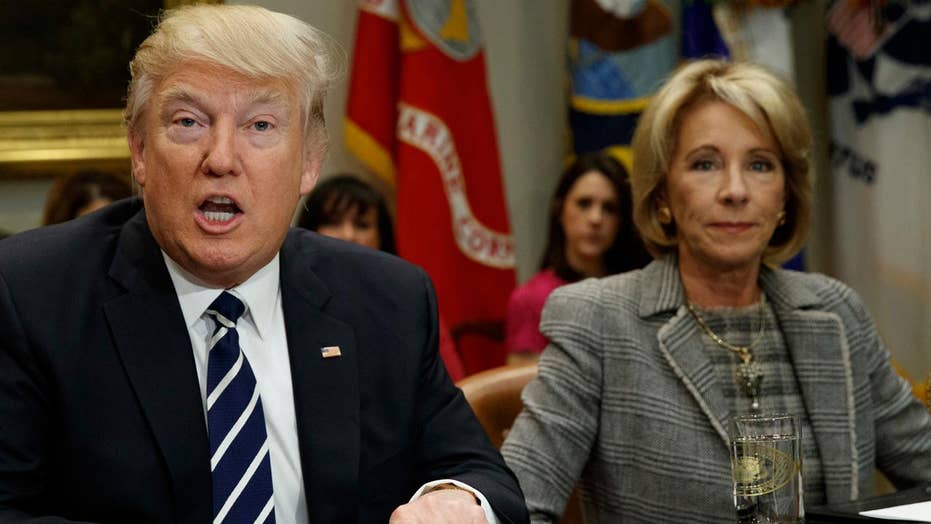 Trump praises DeVos for her 'toughness' and 'genius'

Education secretary jokes with the president that, if asked, she'd 'probably' go through confirmation process again

Students of history know that governments rarely give up power without a fight. To paraphrase Edmund Burke, those who have been intoxicated with power never willingly abandon it. Yet, last year, the federal government passed a new education law which returns a significant amount of power and decision-making authority to states, districts and schools.

The bi-partisan passage of the Every Student Succeeds Act creates a unique and exciting opportunity for improving American education. The law explicitly bars the Department of Education from dictating or influencing standards or curricula at the federal level, and states and districts have a wide range of new liberties when it comes to developing accountability systems, testing and content.

But with this newfound freedom from Washington comes a newfound responsibility for excellence at the state and district level. We cannot confuse local control with laissez faire. State and local leaders must embrace this opportunity and lift expectations, not relax them.

This is a large task and will require some heavy lifting, though. For years, states have been in compliance mode – overly focused on meeting detailed federal criteria – and that mindset has lulled some states into complacency. But that is the case no longer. Authority over American education has undergone a seismic shift. Now the states and locales have both the power and the accompanying responsibility to improve our nation's performance.

Although daunting, this is not an insurmountable task. Several states have done an excellent job at reforming and improving education outcomes. Take Massachusetts, for example. In the 1990s, the Bay State dramatically raised standards, improved accountability and raised the bar for teacher certification. Within several years, it became the nation's leader in education and on par with some of the leading countries in the world. (However, there is a legitimate concern today that Massachusetts has begun watering down some of its rigorous standards and that performance is starting to backslide.)

In addition, states now have a genuine partner at the federal level in the Trump administration who will not overreach federal authority and seek to exert influence through federal funds or Title IX bathroom threats. In fact, the administration went so far as to issue an executive order to study previous overreach into our schools by Washington in the hopes of reversing the federal power grab. When was the last time that happened in federal education policy?

The focus of the administration and Education Secretary Betsy DeVos is in the right place: empowering states to better employ market forces and create choices for the benefit of students. DeVos will exert federal oversight in a limited but proper fashion, and she knows that the specifics of education reform in particular circumstances are properly left to state policy leaders.

We're already witnessing states taking advantage of this new paradigm shift. In Kentucky, for example, Republicans led an overhaul of the state's education system that returns control of standards to the state, improves teachers' influence over testing and empowers local districts to find their own solutions to turning around failing schools, rather than yielding to intervention from the state department of education or the federal government. In Arizona, Governor Doug Ducey and Republicans have passed a massive expansion of the state's education savings account program, and are now looking at innovative school financing ideas that actually reward student success.

The combination of hands-on state leaders and a hands-off federal government is the recipe for education success. And while school choice and local control are important, they are only two of the elements necessary for serious education reform. We can't take our eyes off the importance of high-quality content and curricula as well as rigorous accountability systems. A new study from the Johns Hopkins Institute for Education Policy and Center for Research and Reform in Education found that “[c]omprehensive, content-rich curriculum is a common feature of academically high-performing countries” and “[t]he cumulative impact of high-quality curriculum can be significant.”

We know what works in education, but for years, states, districts, superintendents and teachers have had their focus distracted and hands tied by burdensome federal regulations. For years, they have been asking for relief. Now they have it. We cannot squander this opportunity.