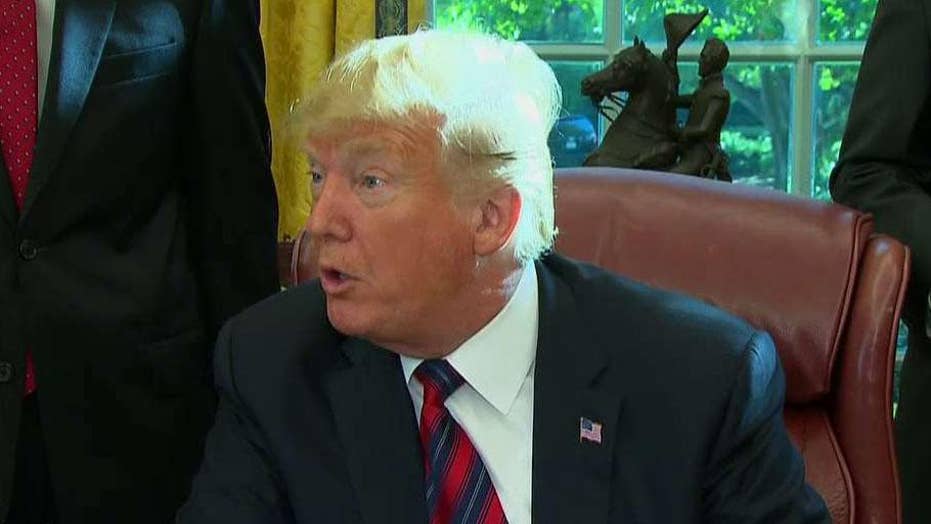 Trump: I am a nationalist and I am proud of it

President Trump says Saudi Arabia has been maybe the biggest investor in the U.S. Trump also says he loves the U.S. and it has taken second fiddle.

For saying this at a political rally in Texas, President Donald Trump has been vilified by the left, including some in the mainstream media. He really means "white nationalist," they claim.

What exactly does nationalism mean?

Merriam-Webster defines it in part as “loyalty and devotion to a nation; esp: a sense of national consciousness exalting one nation above all others.”

So nationalism comes close to patriotism (love of and devotion to country). It is not patriotism’s opposite, as President Macron of France said in remarks aimed at President Trump.

We should want our president to be a nationalist. We wouldn’t want a president who says, “I’m in the White House to put Brazil ahead of America” or “I’m looking out for other countries as much as I am for America.”

We elect a president to put this nation and its citizens first. We pledge allegiance to the flag of this country, not to the entire hemisphere. It’s “My country, ’tis of thee,” not “My continent, ’tis of thee.” There is no North American Union like there is a European Union.

As U.S. citizens, should we feel comfortable putting America first? Yes, you bet.

This is the first nation in history created out of the belief that people should govern themselves. It is the greatest defender of freedom in the world. No other country has done a better job of establishing equal rights for all citizens. No other has united so many people from so many different shores.

America is arguably the world leader in invention and the greatest marketplace for the free exchange of ideas. It is the greatest economic engine in history and the world’s most generous nation.

The American record is by no means perfect, but it stands taller than any other.

Abraham Lincoln was perhaps the patron saint of nationalists. His dedication to the Union was fierce and uncompromising.

“My paramount object in this struggle is to save the Union,” he wrote during the Civil War. He understood that, ultimately, the hope of freedom depended on the nation’s survival — freedom for the slaves, for all Americans, and for millions abroad. He believed, after all, that this country was “the last best hope of earth.”

He was right. Lincoln put America first. Perhaps it’s not a bad idea after all.

Dr. William J. Bennett, former United States secretary of education (1985-1988), is one of America’s most influential and respected voices on cultural, political, and educational issues. His newest book is a single-edition volume of his acclaimed trilogy, "America: The Last Best Hope," which tells the inspiring narrative of our exceptional nation.