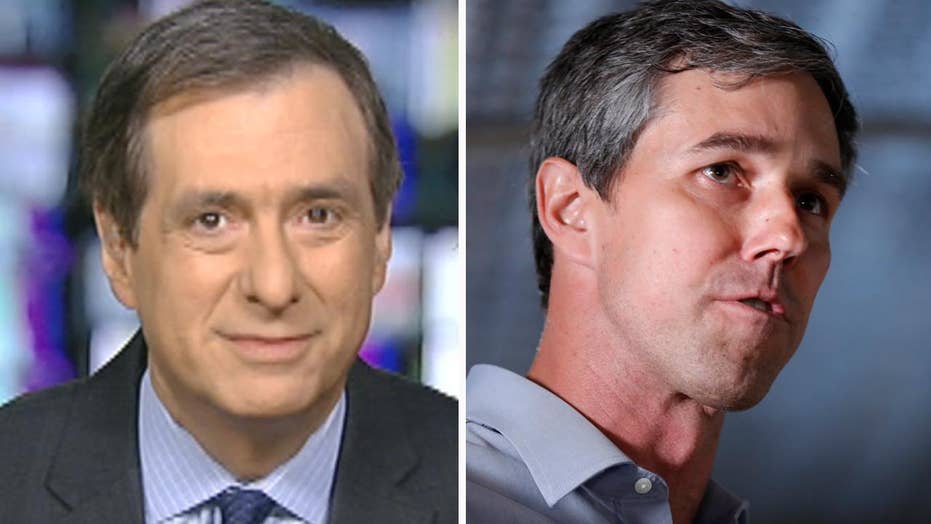 Howard Kurtz: Beto has the sizzle, but is that enough to win the nomination?

Betomania is a lot like Beatlemania – except instead of teenage girls in the 1960s, journalists are now the ones swooning for their star.

If the Beatles were around today to sing about media infatuation with newly announced Democratic presidential hopeful Robert Francis “Beto” O’Rourke, their song would be titled “They love him, yeah, yeah, yeah.”

O’Rourke is a skateboarding mix of rock ‘n’ roll (he was in a punk band named Foss), lefty politics, dictatorial ambition and media adoration. Wrap it up in a hip social media package with a logo ripped off from Whataburger Spicy Ketchup (I’m not joking) and, voila, you have the perfect creation.

Meet the new JFK/RFK candidate for a media that's desperate for a return trip to Camelot (even if his hands operate independently from his body).

We saw this all before when Bobby Frank, aka Beto, ran and lost against Republican Sen. Ted Cruz in Texas last year. ABC reporter Paula Faris called O’Rourke a “rock star,” underlining it by saying, "No, you really are!"

The media will be sad if Beto loses, but they’ll adapt. Journalists will fall in love with whoever Democrats nominate for president.

Well, Beto is back and so is Faris, which takes us to the five moments the media would rather we forget:

The Crush, Part II: This time around, Faris isn’t the worst. But she earned her status as president of the Beto Fan Club, so she’s first. Faris hyped Beto’s entry into the presidential race, noting, “He's sat down with Oprah, posed for Vanity Fair.” He even spoke to voters, in Iowa, of all places! OMG! Oprah! Faris then asked: “Can hope, change, and unity beat Trump?” Isn’t it nice to see reporters create marketing slogans for the candidates they cover? Bless her heart.

Vanity, yes. Fair? Hardly.: Vanity Fair’s team of writer Joe Hagan and star photographer Annie Leibovitz kicked off the magazine’s Beto-max April issue. It included more than 8,600 treacly and adoring words. Hagan just loved Beto’s “aura” and “preternatural ease.” And we learned vitally important information. Beto curses! He has Bob Dylan’s memoirs, as well as genuine LPs from the Clash and Nina Simone. He has actual books and biographies. (Hagan wrote a biography of Rolling Stone’s Jan Wenner. He must have fainted at the sight.) Hagan called Beto “a candidate of honesty and basic decency, à la Jimmy Carter.” Here’s why journalists love him: “Beto O’Rourke is quintessentially Generation X, weaned on ‘Star Wars’ and punk rock and priding himself on authenticity over showmanship and a healthy skepticism of the mainstream.” They don’t believe it, but they want you to.

Finding his superstar: Hagan went on MSNBC to rave about Beto and his "charisma” – and the star-struck journalist may have outdone Faris. He talked about Beto’s sense of “destiny” and how he has “that gleam in his eye." Then he revealed that Texas Tribune CEO Evan Smith gave O’Rourke an even greater compliment. Hagan quoted Smith as saying that seeing O’Rourke “in front of people” is “like a ‘Jesus Christ Superstar.’” Yep, journalists thinking a politician is like Jesus. But remember, journalists aren’t in a cult.

Van on the run: Sometimes liberal news coverage is so ridiculous that late-night TV comedians have to make fun of it. “Late Night” host Seth Meyers on NBC made maximum sport out of MSNBC’s obsession with Beto’s minivan. Correspondent Vaughn Hillyard actually asked Beto, “where is the rental car from?” Meyers mocked in response: “Wow, hard-hitting stuff, you guys.” Myers then launched into possible follow-up questions: “Did you use Hertz or Avis? Answer the question! Will you release your minivan returns?” Are you ready for another 20 months of this? I’m not.

From across the pond: For a little British Beto-mania we have The Independent. It published a story headlined “Beto O’Rourke: Democrat rising star to run for president against Trump in 2020 election.” Despite the upbeat note, there was a bit of English honesty: “His candidacy also generated a torrent of media coverage.” Bloody understatement.

Racism and sexism: But not everyone was fully on board with Beto. Because he might not be liberal enough and he’s both white and male! Woke CNN mentioned this fact 52 times during the first day of O’Rourke’s candidacy, just in case any of the few voters watching the network were confused by his nickname.

CBS was a little less obvious. But still, Gayle King, of “CBS This Morning” raised the issue of Beto being a “privileged white man.” Remember, it’s not a problem to say stuff like that when liberals do it.