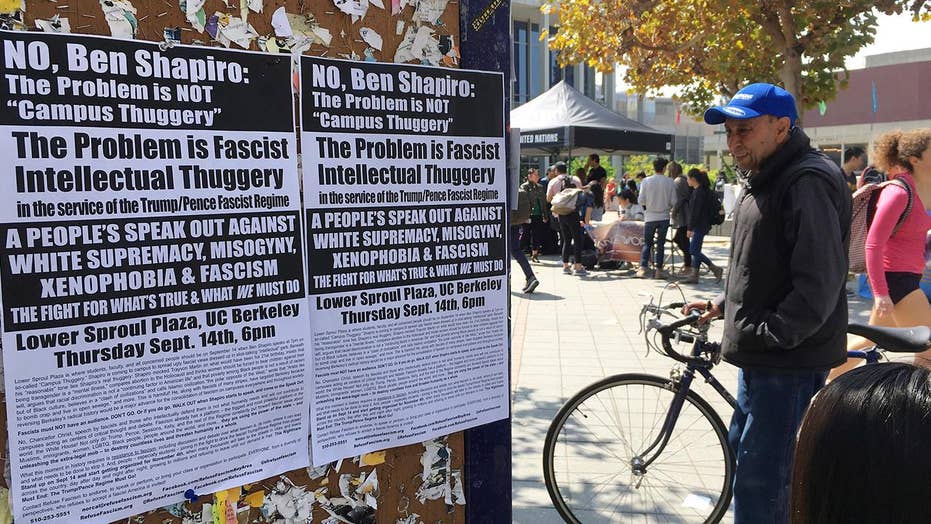 As my campus at the University of California, Berkeley (UCB) “braces” itself for an appearance by conservative Ben Shapiro, I am taking a step back to think about all the moments and highlights that I have faced while being a vocal conservative in a liberal atmosphere. Now that I am a senior I am beginning to realize the crucial points that not every average conservative would or should ever face in his or her lifetime. With some of these moments being described as life-threatening, I have experienced it all through the radicalism of UCB.

The first time my life was actually threatened was on the evening of February 1, 2017. I still remember sitting on the top floor of the Martin Luther King Building where Milo Yiannopoulos was supposed to speak, thinking about how my colleagues and I were ever going to get out of there, while outside the protestors were throwing anything they could grab at the windows. Even the cops who were being paid $10,000 in security fees were astounded at the sheer chaos that had formed outside the building in the form of Antifa, BAMN (By Any Means Necessary), student, and other civilian protestors. Even after the cops had created a window for us to escape out of the back of the building, I remember being followed by one shady figure who only stopped following me after I turned around to confront him. Even then, the stranger didn’t leave me alone until he had his fill of yelling at me and calling me a “fascist, white supremist asshole.” I am in fact, Chinese and Cuban if anyone was wondering.

Even then, the stranger didn’t leave me alone until he had his fill of yelling at me and calling me a “fascist, white supremist asshole.” I am in fact, Chinese and Cuban if anyone was wondering.

I also remember how several members after that event advised the club that they were going to keep their heads low and avoid any attention for a little while, fearing for their personal safety. However, the rest of us decided that we were going to trudge on, determined to not give up on our commitment to providing a conservative voice at UCB no matter the costs. That was why I joined the Berkeley College Republicans (BCR) and why I chose to fight alongside the president at that time, Jose Marine Diaz, because I respected his commitment to the club and to its members.

After the moment on Feburary 1, my colleagues and I were consistently harassed and attacked at random times and places. Our signs were either destroyed or stolen, members of our club had been hit by people on bikes, our lists of new members had been stolen and the people on those lists had gotten threatening emails, along with the daily routine of spit, curse words, middle-fingers, and screaming. Nevertheless, we each looked out for one another, having each other’s backs, and making sure we all made it home safe and sound at the end of the day.

However, all good things must come to an end, unfortunately. Nowadays, the insincere attempts of UCB and the new leadership board of BCR to cooperate have made way for more extreme environments of political polarization, pushing regular people to plan controversial rallies on the weekends where they eventually physically clash with one another. BCR members who call themselves the champions of free speech act as though they are the reincarnations of Mario Salvo (a Berkeley Free Speech founding father, you might say), and that they live in constant fear of being arrested for speaking their minds. This is meant to get normal, conservative citizens upset. So upset, that in some cases they lash out against fellow Americans who believe in different political ideas.

This is the problem with groups on the left as well. Antifa and BAMN are so hopelessly set in their ways that they seem to forget that the people they are attacking are fellow American citizens. Instead, they see them as Nazis, bigots, fascists, racists, etc., all because they were told to think that way.

The hoopla that surrounds such events like the hosting of Yiannopoulos or Shapiro must be ignored. It is chaos for the sake of chaos where the only ones who benefit started the chaos, while the people stuck in the chaos destroy each other. The end result is more centrist conservatives like myself being stalked and harassed on our way home. The only way the senseless fighting at these rallies and events are going to truly end is when people start to realize how unimportant and ineffectual the fighting really is, and that the ones telling you that you should get angry and that you should riot are simply acting rash and should be called out for their destructive behaviors, not celebrated.

Jonathan Chow is a second-generation immigrant who grew up in Miami, Florida. His mother was born in Havana, Cuba and his father in Canton, China – both fled to the US as teenagers. He is a student at UC Berkeley majoring in early modern intellectual history.