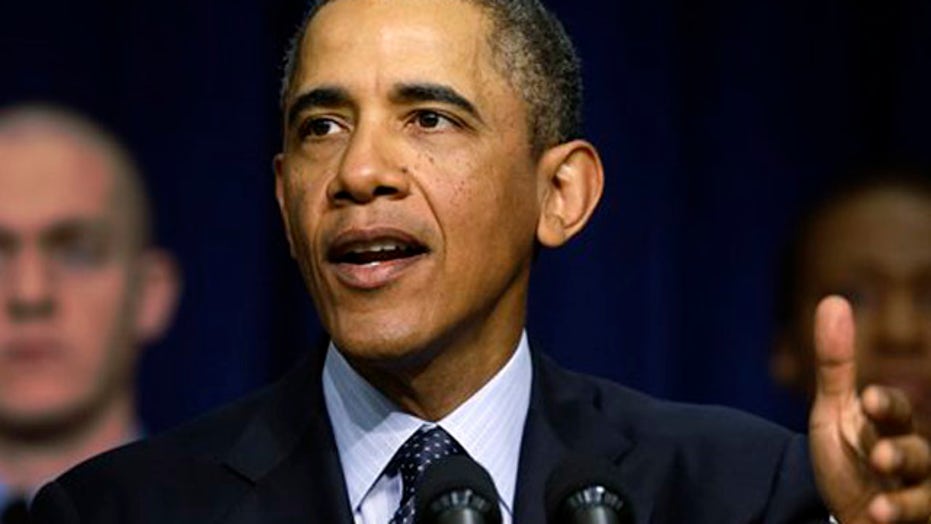 Obama warns of doom and gloom as spending cuts near

At the end of 1995 and stretching into January 1996, the federal government "shut down" because of an impasse between President Bill Clinton and House Republicans led by then-House Speaker Newt Gingrich. The issue was increased taxes vs. less spending. Sound familiar? The government re-opened when a bipartisan agreement was reached to balance the budget by 2003. It wasn't for reasons that included, but were not limited to, two wars. Now the national debt is racing toward an unsustainable $17 trillion.

This time around it isn't about closing government. It's about "sequestration," which President Obama, the Democrats and their big media toadies are styling as economic Armageddon.

On Tuesday, following another vacation and a round of golf with the disgraced Tiger Woods, President Obama appeared in the Eisenhower Executive Office building next to the White House. Behind him on risers, looking like a church choir but without the robes, were his usual Greek chorus of potential victims should Republicans cut spending by a single dollar.

The president said the cuts from sequestration would be "brutal" if lawmakers allow "this meat cleaver approach to take place." Sounds like a bloody horror movie, doesn't it?

Once again, the president offered up the old bait and switch: "targeted spending cuts" along with "closing tax loopholes." As has happened before, if Republicans agree to this (which they had better not if the party is to survive) they'll likely get inconsequential "cuts," if they get any at all, but tax hikes will occur right away. More importantly, any new revenue will likely not reduce the debt because Democrats in Congress are noted for spending new revenue and they won't deal with the major reason for the debt: entitlements.

Last Sunday's New York Times was a kind of preview of Obama's Tuesday remarks. An editorial running more than half the page offered a litany of gloom and doom if Republicans forced the administration to start behaving more responsibly with our money.

The president is again betting that playing to people's emotions, along with envy of "the rich" and calls for "fair share" in taxes will produce a win for him. But if it does, it won't be a win for the country. Can there be any doubt that the president's goal is to marginalize the Republican Party and make them ineffective now and in the next two elections?

The major media can be relied on -- with help from the administration -- to find people who will be laid off work, or a "homeless" person, or a crying woman with her baby down to the last drop of milk. They did during the government shutdown, obscuring the real issue, which is overspending.

As John Makin of the American Enterprise Institute wrote recently in The Wall Street Journal, the sequester "...amounts to $2 of spending cuts for every dollar of the president's tax increases enacted on Jan. 2." The looming cuts, Makin notes, are "minuscule" when compared to the overall debt.

The president got his tax hike in the fiscal cliff debate. To ask for more now without significant spending cuts, entitlement reform and a re-written tax code aligns him with the extortionists who ruled Chicago during the Roaring '20s.

In his oath of office, the president promised to "preserve, protect and defend the Constitution of the United States." Instead, he appears to be shredding it.

Whatever the short-term political price, Republicans must stand for the Constitution, the country and the future. Allowing the president to have his way again risks harming all three.