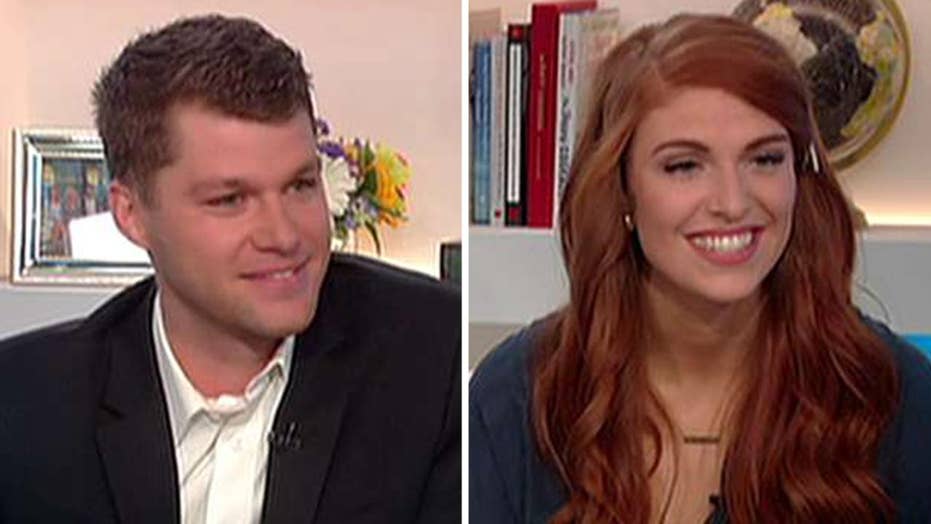 Former reality TV stars Jeremy and Audrey Roloff open up on their approach to marriage, faith and family in 'A Love Letter Life.'

With our wedding day just a few months away, what was supposed to be an epic day-date reunion with my fiancée Jeremy turned into an epic fight. I expected quality conversation right off the bat, and he wanted to ease into the rhythm of being in each other’s company. Long story short: poorly communicated expectations resulted in a poorly fought fight, which turned into a valuable learning experience. We like to call this fiasco our “Camp 18” fight.

If you’ve been in a relationship for any length of time, you’ve probably experienced a similar situation. You know, those moments when what actually happened was different than what was supposed to happen. When you were supposed to engage in stimulating and soul-stirring conversation over brunch, but instead your fiancé spent the entire time analyzing the structural integrity of the restaurant and acting like he wanted nothing to do with you. Cool.

For us, communicating expectations often begins with a quick check-in while we’re in the car on the way to an event or lying in bed the night before a big day. It’s as easy as asking, “What are your expectations for this party (gathering, day, vacation, etc.)?”

Yes, it really is this simple. This question helps us clearly understand each other’s wants, hopes, and needs, and it gets us on the same page. It helps facilitate unity, connection, satisfaction, and win-win situations. It helps us avoid potential conflicts because we know ahead of time that one of us wants to leave early or spend time with his or her parents or maybe do different things afterward. You get the idea.

JEREMY AND AUDREY ROLOFF: MARRIAGE IS HARD WORK – HERE'S HOW WE PROTECT OURS

We’ve found this to be so helpful in our marriage. Even so, we’re far from having perfected the art of expectation management. Like everything in life, learning to communicate our expectations demands practice. We still occasionally fail to communicate our expectations well, and we still react poorly when one of us disappoints the other. But we are on a pilgrimage of learning how to love each other well, which makes every conflict an opportunity to learn more about how we can prevent conflict in the future.

Conflict is inevitable in relationships, but fighting is preventable. We learned a lot from our Camp 18 fight – mostly how not to handle conflict – but it also got us thinking about some boundaries we could set to prevent future conflict. The health of our marriage would be determined not by an absence of conflict, but rather by our ability to handle conflict well. So we asked each other a few questions that helped us set our “code of conflict”:

■      What steps can we take to prevent tension from evolving into turmoil?

■      What parameters or boundaries can we set so that our fighting is healthy and productive rather than harmful and destructive?

■      What can we do to speed the process of repentance, forgiveness, and reconciliation so that we don’t linger in hurt and dysfunction?

We agreed it was a good idea to work through these questions before we said “I do.” So we sought guidance from the Bible and from our premarital counselors. The result was our code of conflict -- rules aimed at preventing conflict, handling conflict, and promoting quick resolution. Some of these rules were inspired by couples who were farther along in their marriage journey, and some we learned from our own fights and failures:

■      Remind each other you’re on the same team when disagreements arise.

■      Eliminate "never" and "always" from your statements about each other.

■      Don’t vent conflict to other people, unless it’s to a mentor or in an effort to resolve the issue.

■      Resist trying to resolve conflict over the phone.

■      Don’t withhold sex to prove a point or position yourself.

■      Pursue a resolution over a compromise.

Have you discussed a code for conflict for your relationship? In our marriage, we use it as a way to keep the playing field fair and square, and the more we use it, the less fouls we commit.

This has helped prevent arguments from turning into fights. It has reminded us that we are on the same team. It has encouraged us to respond rather than react. It has provided detours away from situations that may have otherwise escalated into hurtful words and disrespectful actions. It has urged us to be givers and forgivers. And it has protected our oneness.

Audrey and Jeremy Roloff are the authors of "A Love Letter Life," hosts of the top-rated Behind the Scenes podcast, and founders of "The Marriage Journal."