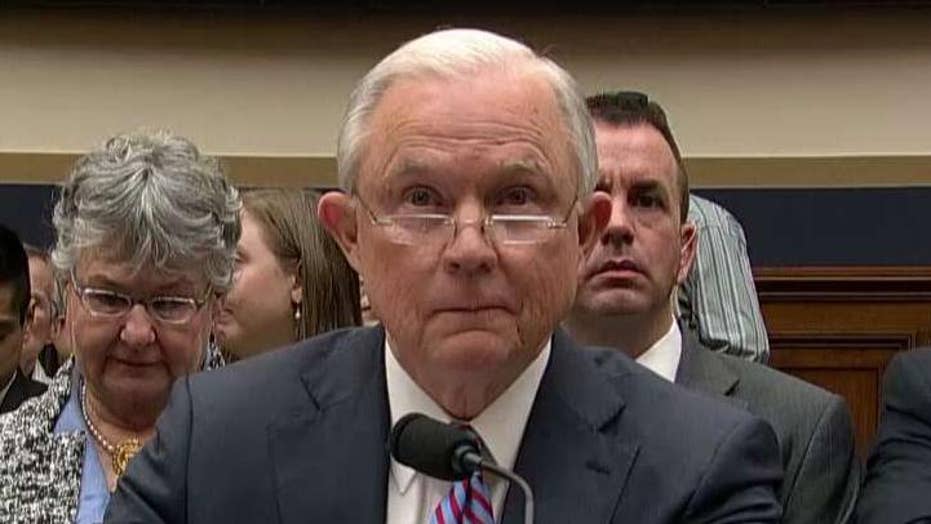 The attorney general delivers opening remarks to the House Judiciary Committee's Oversight of the Department of Justice hearing.

The rule of law is the foundation of our system of government.  In the vision of our Founders, we have “a government of laws—and not of men.”

Under President Trump’s strong leadership, the Department of Justice has made restoring the rule of law our top priority. Everything we do is guided by this principle.

Under the previous administration, parties who had been sued by the government and then settled the lawsuit were sometimes required to pay community organizations that were not even involved in the case or harmed by the defendant. That was not only wrong, but contrary to longstanding legal principles, and we have put a stop to it. Lawsuit settlements with the government should not be used to bankroll third-party special interest groups or the friends of whomever is in power. They should help compensate victims or go to the taxpayer. Now that is what they will do.

We are also trusting our prosecutors again and letting them do their jobs.  The previous administration forced them to leave out important facts in drug cases to achieve sentences lighter than were required by the law. Federal drug prosecutions—and sentences—went down dramatically.  Meanwhile drug deaths rose to unprecedented levels.

We have removed this restriction on our prosecutors and told them to target the most violent criminals.  They have already achieved significant results, with charges for federal gun crimes up nearly a quarter.

Under this administration, the Department of Justice is serving the American people by following the laws they have duly enacted—and we are just getting started.

We are rewarding those jurisdictions that assist federal law enforcement—not those who refuse to, like “sanctuary” jurisdictions.  Our law enforcement grants now have conditions to encourage our state and local partners to help us remove criminal aliens from this country.  Politicians have no right to protect criminals or promote lawlessness.

Neither do those entrusted with classified information.  Leaks break the public trust and threaten public safety.  That is why we tripled the number of active investigations into leaks.  We have already charged four people with unlawfully disclosing classified material or concealing contacts with foreign intelligence officers.

When necessary, we go to court to keep the American people safe, such as when we defend the president’s right to protect this country from security threats. We are defending the president’s clear legal right to stop the entry of those who cannot be adequately vetted.  Numerous judges—and two district courts—have upheld the president’s travel ban, and we are confident that it will stand.

The Department cannot, however, defend illegal actions.  That is why we advised the administration to end the previous administration’s unlawful Deferred Action for Childhood Arrivals policy, or DACA. This policy was contrary to our immigration laws and did not have Congressional approval—indeed, Congress rejected similar legislative proposals numerous times.

For the same reason, the Department has agreed to settlement terms with 469 Tea Party and other conservative groups whose tax-exempt applications were delayed by the IRS based on inappropriate criteria including conservative names and policy positions, and civil cases with 90 plaintiffs regarding the previous administration’s contraception mandate.  These cases never should have been necessary.

Religious liberty is an inalienable right, and at the president’s direction, we issued legal guidance on how to properly interpret and apply legal protections for religious liberty.  And it is not just freedom of worship: we do not give up our religious freedom when we are at work, when we interact with the federal government, or any other time we participate in society.

We do not give up our rights when we go to school, either.  This Department is standing up for those whose rights have been violated on campus, including supporting a lawsuit by one young man who was punished for discussing his faith outside of his school’s tiny “free speech zone.”   And we are examining a case where Asian-American students allege racial discrimination in one university’s admissions.

In 1776, Thomas Paine wrote that “in free countries, the law ought to be king.”  Under this administration, the Department of Justice is serving the American people by following the laws they have duly enacted—and we are just getting started.