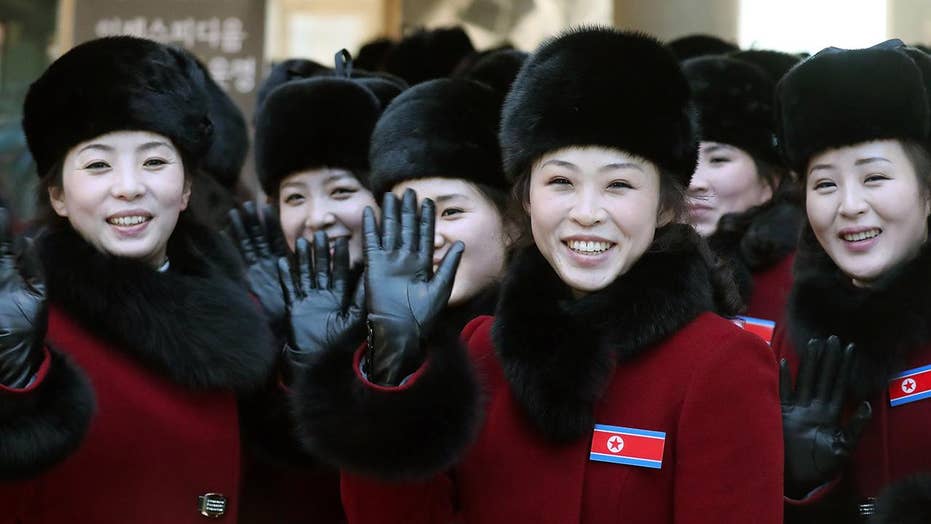 North Korea's participation in the Winter Olympics is seen as a step toward improving its reputation on the international stage; but the U.S. reminds world leaders that Pyongyang is still pursuing its nuclear ambitions.

Vice President Mike Pence, who will head the U.S. delegation at Friday’s opening ceremony of the Winter Olympics in South Korea, will also be competing in a difficult new event not on any Olympic program. You might call it diplomatic ice wrestling.

Pence will be going up against a group of high-profile representatives from nearby North Korea, a place the vice president has aptly called the world’s “most tyrannical and oppressive regime.”

North Korean dictator Kim Jong Un is sending two competitors: his head of state, Kim Yong Nam and, more significantly, his sister, Kim Yo Jong, the first vice director of the Central Committee of the Workers’ Party. She is the first immediate member of the Kim family, which has ruled the North for seven decades, to visit South Korea.

Pence’s task will not be easy. Unbelievable as it sounds, the leaders of both North and South Korea are working together like teammates – despite the fact that America and other nations fought to save the South from being overrun by the North after regime founder Kim Il Sung invaded the South in June 1950. From then until the armistice ended fighting in July 1953, nearly 37,000 Americans died.

Ever since, the U.S. military has deterred the Kim regime from attacking the South in full force.

Pence’s first stop on his five-day, two-nation Asia trip was Japan, where he met staunch American ally Prime Minister Shinzo Abe. There the vice president promised “the toughest and most aggressive round of economic sanctions” on the North.

“And we will continue to isolate North Korea until it abandons its nuclear and ballistic missile program once and for all,” Pence declared.

As for Pence’s trip to South Korea, his mission was clear. “We’re not going to let the North Korea propaganda machine hijack the messaging of the Olympics,” his communications director, Jarrod Agen, told the Washington Post. “The vice president will remind the world that anything the North Koreans do during the Olympics is a charade to disguise the reality of the oppression inside North Korea.”

Pence is exposing that charade in a way bound to enrage Kim Jong Un. The vice president is taking a special guest to the Olympics opening ceremony: Fred Warmbier, the father of Otto Warmbier, the University of Virginia student imprisoned for 17 months and brutalized by the North Korean regime. The younger Warmbier died in a coma last June, just days after his release by North Korea.

“The vice president will be there with Mr. Warmbier at the opening ceremony,” a White House official told CNBC Monday, “to remind the world of the atrocities that happen in North Korea.”

Pence is following the lead of President Trump, who in his State of the Union address last week highlighted the torture and tragic death of Otto Warmbier by having the young man’s parents sit in the House gallery with first lady Melania Trump.

The presence of Fred Warmbier at the Olympics in PyeongChang is an effective countermeasure to 22 North Korean athletes – and about 450 other North Koreans – who have wormed their way into the games.

The North’s plan is obvious: raise the prospect of reconciliation to convince Seoul to break its relationship with the U.S. If that happens, Kim Jong Un can intimidate the South into submission, thereby achieving the core goal of his family – reunification of the two Koreas.

Who would possibly fall for Kim Jong Un’s machinations? South Korea’s president, for one.

President Moon Jae-in was chief of staff for President Roh Moo-hyun, the most leftist of the South’s previous leaders. Roh, in office 2003 to 2008, wanted to move his country away from Washington and toward North Korea and its backer, China. Moon, now president, is continuing these anti-American policies.

Among other things, Moon Jae-in has largely bypassed Washington in making preparations for the North’s participation in the Olympics.

South Koreans, by and large, want the North Koreans at the Olympics. Polls show more than 80 percent of them approve of the North’s athletes competing. At the same time, more than 70 percent are opposed to fielding a joint North-South team in women’s ice hockey.

South Koreans are furious that their athletes, who have trained for years, have been removed from their own ice hockey team to make way for North Koreans, who did not qualify in this event.

There is also unhappiness in the South over North and South Korean athletes marching under a single flag. The so-called conservatives are dead set against reconciliation with the Kim family. That opposition is utterly predictable. What is surprising is that young voters, a crucial part of Moon’s constituency, are turning against their president on this issue.

Why? The young feel the North Koreans are upstaging the South, turning the games into “the Pyongyang Olympics.” Moon does not appear to be especially concerned by this. Now 65, he and many in his generation hope for unification of the two Koreas one day.

Young voters, on the other hand, are becoming South Korean nationalists, who see their society separate and apart from the horrific totalitarian state in the North, the horribly misnamed Democratic People’s Republic of Korea. As such, they have been grumbling about Moon’s attempts to make the two Koreas one. No surprise then that Moon’s high approval ratings are coming down fast in his Republic of Korea.

That helps Washington and suggests a strategy for Vice President Pence. The U.S. could, if it so chose, take a tough line and object to the presence of Kim Yo Jong at the games because she is under U.S. Treasury Department sanctions.

Moreover, the Trump administration could also try to stop another member of the North Korean Olympics delegation, Choe Hwi. Choe, vice chairman of the Central Committee of the Workers’ Party, is under both U.S. and U.N. sanctions. The U.N. Security Council, in Resolution 2356, imposed an asset freeze and a travel ban on him.

A better strategy for Pence, however, is to play the long game and compete for South Korean public opinion.

“I think VPOTUS should first and foremost emphasize the success of the games as a result of the hard work and determination of the free people of the Republic of Korea,” David Maxwell, who served five tours of duty with U.S. Forces Korea, told Fox News, referring to the vice president. “It is an illustration of what real democratic republics can do for their people and the world.”

By focusing on what Maxwell calls “the positive message of South Korea’s success,” Pence will be more in tune with South Koreans than their own president.

Moreover, Maxwell believes that Pence should emphasize “the strength and commitment” of the U.S.-South Korea alliance and the four-decade-old Combined Forces Command to “demonstrate strategic reassurance and strategic resolve.”

At this crucial juncture, South Koreans could use a reminder that it is the United States –and no other nation – that has pledged to defend them from a hostile North.

And Pence is in fact reminding South Koreans of that American commitment. Before attending the opening ceremony of the Olympics, he will, by going to the Cheonan Memorial, honor the 46 South Korean sailors killed when a North Korean torpedo struck their frigate in March 2010.

Pence is already talking about one other theme that Maxwell recommends. The retired Army Special Forces colonel told Fox News that the vice president “should stress that President Trump and the United States along with the Republic of Korea are very concerned with the welfare of the 25 million oppressed Koreans living in the North and pray that someday they will experience the opportunity to enjoy life, liberty, and the pursuit of happiness, which are inalienable rights for all of humanity and specifically all Koreans.”

With Fred Warmbier at his side, Pence will be doing exactly that.