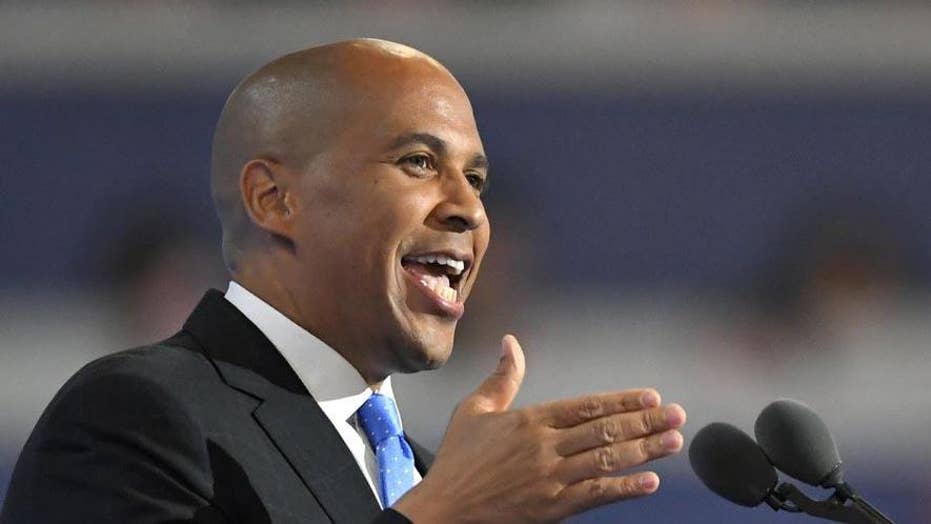 The craziness at the Senate Judiciary Committee hearing on Judge Brett Kavanaugh’s Supreme Court nomination got even crazier Thursday, when Sen. Cory Booker, D-N.J., dramatically announced before the TV cameras that he was releasing what he said was a confidential email from Kavanaugh in violation of Senate rules.

Booker said he “knowingly violated” Senate rules in an act of “civil disobedience” when he released what he described as a confidential email that Kavanaugh sent when he served in the White House as a lawyer for President George W. Bush. The New Jersey senator said he was prepared to face punishment by the Senate for his rule-breaking.

You could picture Booker using video of the moment in a campaign commercial if he seeks the Democratic presidential nomination in 2020 and writing about himself in a new edition of “Profiles in Courage.”

And then committee Republicans burst Booker’s bubble, saying the previously confidential email Booker released had been cleared for public release Thursday morning and was no longer confidential.

“All of this drama this morning apparently was for nothing and it’s unfortunate,” Sen. John Cornyn, R-Texas, told reporters.

The committee had obtained the email as part of some 141,000 pages of documents dealing with the nominee that were designated as “committee confidential” – meaning they could be read by senators but not made public. But the “confidential” restriction was then lifted on the one email, which involved a discussion by Kavanaugh of racial profiling.

Booker’s protest action, which turned out to be for nothing, was not appropriate.

And Booker was not elected to play the role of one of the many protesters who, during Kavanaugh’s hearing and previously, have taken well-publicized protest actions to "resist" the Trump administration in every way possible, including violating the law.

The senator was elected to be a responsible legislator who would play by the rules in service to his constituents and our nation.

Other Democrats on the Judiciary Committee – Sens. Dianne Feinstein of California, Dick Durbin of Illinois, Mazie Hirono of Hawaii and Amy Klobuchar of Minnesota – said they supported Booker’s release of the email when they thought it was still confidential.

Even though the rule-breaking by Booker turned out not to be rule-breaking in the end, it set a bad precedent. Senators need to follow the rules of the chamber. That’s because in order for the Senate to operate smoothly in service of the American people it has to operate by rules – and members have to be able to trust each other to abide by those rules.

When senators feel they can ignore rules whenever they wish and fight their opponents with any means necessary the Senate can descend into chaos and paralysis, making it unable to function as what it used to be called – “the world’s greatest deliberative body.”

No one expects Republicans and Democrats to agree on everything in the Senate or in the House. But the two parties can oppose each other vigorously and with determination while operating under agreed-on rules – much as boxers try to knock each other out while still adhering to clear rules limiting the actions they can take in the ring.

Unfortunately, too many Senate Democrats have decided that they must wage a no-holds-barred fight to deny President Trump the right to appoint anyone to the Supreme Court.

In the absence of new revelations showing he is unqualified, I am reluctantly supporting Kavanaugh’s nomination. And I advise my fellow Democrats on the Senate Judiciary Committee and in the full Senate to support him as well and vote to confirm him.

If Democrats are seen as part of the left-leaning resistance movement fighting everything President Trump does – rather than as members of the loyal opposition – it can only hurt them in the Nov. 6 midterm elections.

Throughout this week’s confirmation hearing, Judiciary Committee Democrats have acted more like radical college student protesters trying to silence a speaker they dislike than lawmakers carefully considering whether to support a nominee to the nation’s highest court.

The Kavanaugh confirmation hearing has been a raucous occasion featuring open hostility towards the nominee and questions about his honesty and integrity.

Kavanaugh, with his family behind him, was met repeatedly with shouts from protesters – dozens of whom were arrested for disrupting the proceedings – and objections from Democrats. It took Chairman Chuck Grassley, R-Iowa, over an hour to read his opening statement in totality.

What has remained clear throughout the hearing is that, by conventional standards, Kavanaugh is qualified to become a Supreme Court Justice. Some Democrats, particularly in swing states, would surely agree.

In states Trump won in the 2016 presidential elections – where Democratic senators will need substantial and broad support to be re-elected in November – opposing Kavanaugh’s nomination does not make political sense. Democratic senators in this category include Heidi Heitkamp of North Dakota and Joe Manchin of West Virginia.

Heitkamp, who has said she will refrain from further comment until after the hearings, said in August that Kavanaugh “seems to be a fairly standard conservative judge, and obviously highly qualified.” She’s right.

At age 53, Kavanaugh’s experience speaks for itself. He served the past 12 years on the federal appeals court in Washington, D.C., one of the most important courts after the Supreme Court.

Kavanaugh was also a clerk for Justice Anthony Kennedy, the very justice he was nominated to replace, and worked in key positions in the George W. Bush administration.

This is not to make light of marital infidelity – real or merely alleged. It is to say the Constitution does not require the president to be a faithful spouse.

The judicial process needs to be non-political, and there have been two major problems with this process in recent years.

First, U.S. Court of Appeals Judge Merrick Garland should have been confirmed to the Supreme Court when he was nominated by President Obama. Republicans waited an outrageous nine months, which was wrong, and only served to manipulate the judicial confirmation process for political purposes.

Additionally, the nomination and confirmation of Justice Neil Gorsuch by President Trump was inherently undemocratic and went against both the spirit and the actual practice of the Senate in exercising advice and consent.

To be sure, Gorsuch was also immensely qualified for the Supreme Court, but the process of confirming him only reaffirmed the politicization of the courts. The judicial process simply cannot be politicized.

Qualified judges should be appointed, irrespective of ideology, and without political considerations.

In the past, even when different political parties held the presidency and the Senate, judicial confirmations were far less politicized.

Take for instance, Justice Kennedy, who Kavanaugh was nominated to replace. Kennedy was appointed by Ronald Reagan with a Democratic-controlled Senate, and was confirmed by a vote of 97-0.

Even the confirmation of Thurgood Marshall, the Supreme Court’s first African-American justice – while not simple in its time – ended in a 69-11 vote.

The judicial confirmation process in the past two years has been almost unrecognizable.

Throughout the Trump presidency, Republicans have out-thought and out-worked the Democrats in the entire process, specifically with the confirmation of conservative Federalist Society judges at all levels.

As a centrist, I believe it is paramount that decisions involving the courts are based on precedent. We need checks and balances that are wholly independent of the legislative process.

The whole process of selecting and confirming federal judges has become far too political. The Constitution created the judicial branch to be fair and nonpolitical, focused on justice rather than partisanship. Democrats and Republicans should approach the judicial confirmation process in the same way – working together to do what’s right for our country rather than what’s politically expedient.