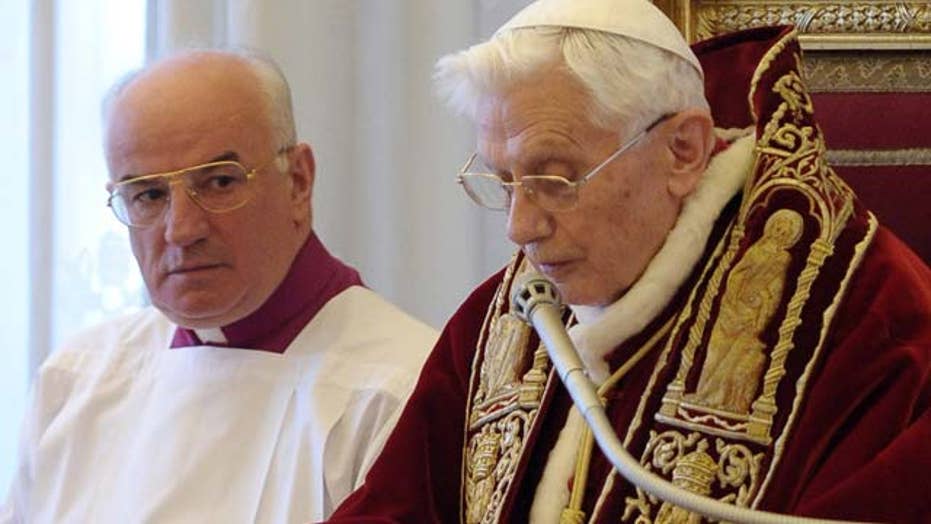 As Vatican leader Pope Benedict never had a chance

He never had a chance.

From the moment he appeared on the balcony of St. Peter’s on April 19, 2005, to greet the faithful, Benedict XVI faced an insurmountable problem: He was not John Paul II.

Benedict’s decision to resign the papacy is being blamed on his age – nearly 86 – and his health – never robust. He might just as well have been diagnosed with a broken papal heart.

Because his nearly eight years on the Throne of the Fisherman never really produced the results he hoped for. He did not unite the conservative and progressive wings of the Catholic Church. He did not re-establish its place in Europe, the work of a previous Pope Benedict and the reason he took that name. Nor did he expand its foothold in Asia, cement its dominance in Latin America, or make serious inroads in Africa. And he did not bring to fruition the ecumenical understanding with other major faiths that he hoped would bloom during his reign.

Benedict faced nearly impossible odds, even before he was elected. Joseph Ratzinger -- his given name -- was already white-haired and stooped when he became pope. He was a German of the World War II generation, and as a boy had served, involuntarily, as a member of the Hitler Youth. His last job in Rome as Cardinal Ratzinger was to head the Congregation for the Doctrine of the Faith – the branch of the Vatican charged with enforcing dogma and rooting out dissent. For that, he was dubbed The Chief Inquisitor and The Rottweiler. His idea of a wild night was a single glass of Riesling and an hour of playing his piano – he was an accomplished interpreter of Beethoven and Mozart.

That’s who he is. But what stymied him was who he isn’t.

His Polish predecessor as Pope, Karol Wojtyla of Krakow, exploded into worldwide prominence and popularity in 1978 as a strong, smiling face for a church that had not elected a non-Italian for nearly 500 years. In combining as his papal name both John and Paul, Wojtyla suggested to the Church that he would follow the prudent style of rule set forth by John XXIII and Paul VI – neither of them firebrands.

Then, John Paul revealed his true nature: a brilliant, conservative theologian, a master politician and historian, a nonpareil philosopher, a polished performer thanks to his youthful acting career, an unapologetic anti-communist, and an inveterate traveler. He also didn’t mind showing off. He skied. He hiked. He canoed. He sported sneakers. He watched bare-breasted African women do traditional dances. And he never stopped talking, in any of the seven or eight languages he spoke fluently, about how God loves us.

By contrast, Benedict’s meek initial outings were public relations meltdowns. His smile, though genuine, looked somehow sinister, as if he were about to bite his audience. Determined to restore the Church’s luster in Europe, where it is often treated like a dotty old aunt, Benedict gave a lecture in Regensburg, Germany, in 2006 that appeared to denigrate Islam. The non-Catholic world howled; the Vatican cringed and apologized.

On his first visit to the U.S. as pope, Benedict offered contrite apologies for the Church’s ham-handed treatment of the U.S. church’s sex scandal involving its priests. Even the pope’s humble mien did not satisfy some, who pronounced him cold and unfeeling toward the plight of victims of clergy abuse. He joined the Twitterati, but his first attempt was a sterile: “I am pleased to get in touch with you through Twitter. I bless all of you from my heart.” At least he stayed under 140 characters.

In nearly eight years, Benedict issued three encyclicals – direct messages to the faithful that often reveal a pope’s enthusiasms and interests. Benedict’s first – entitled “God is Love” -- is a caressing, simply worded, logic-based reassurance that our Lord loves us. Yet even his writing about love suffers in comparison with John Paul’s towering, intellectual yet intimate canon of work.

None of which lessens Benedict’s place in the line of Vicars of Christ. His decision to resign was a brave one, based on personal humility, in keeping with his message to the faithful that the things of Earth are transient, but the promise of heaven lasting and infinite.  For that he should be remembered.