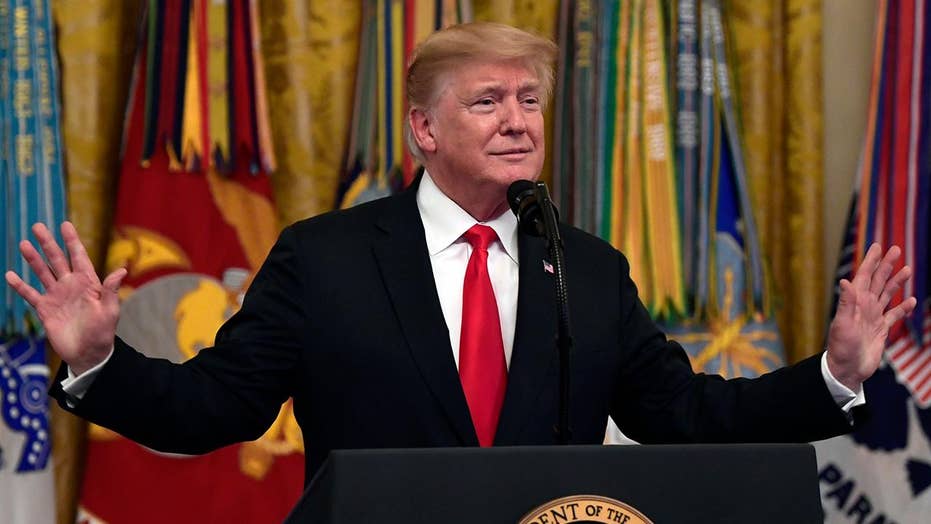 What will Trump's approval numbers mean for the midterms?

Will American's have Trump's strong economy in mind when they vote this November? 'America's News HQ' talk radio panel weighs in.

Republicans running for office need to man up. If they can’t win elections in the midst of an authentic economic boom, shame on them. Especially when Democrats are showcasing a bunch of wild-eyed progressives intent on Making America Lame Again.

With less than 60 days to go before the midterm elections, polling shows Democrats’ lead in the so-called “generic ballot” widening to 8 points, according to the Real Clear Politics average, up from 4 points one month ago.

A “blue wave” still seems unlikely, but many on the left are increasingly optimistic about Democrats taking control of the House of Representatives.

LIZ PEEK: ANGRY OBAMA STILL DOESN'T GET IT AS HE HITS THE CAMPAIGN TRAIL

How can voters want to jeopardize the gangbuster economy, which is providing better jobs and better pay?

How can voters turn their backs on broadening opportunity for all kinds of people – ex-felons, minorities, those without a high school degree – all of whom are being hired in record numbers and who can finally set foot on the ladder of opportunity?

It boggles the mind. But here are some explanations:

First, Republicans are victims of their own success.

While every single survey for the past decade listed jobs and the economy as voters’ chief concern, booming growth has put that worry to bed. Almost everyone can find a job, and robust consumer spending suggests that people expect the good times to roll.

Only 17 percent of Americans polled last month by Gallup mentioned economic issues as their main concern, down from over 50 percent just four years ago. A problem solved is a problem no longer making headlines, or driving people to the polls.

Second, Republicans are doing a lousy job taking credit for the upturn.

Republicans need to tell voters why President Trump’s agenda of cutting red tape and lowering taxes has boosted the economy.

GOP candidates need to explain to voters that the regulatory tsunami from the Obama White House squashed business spending on new plants and equipment. They need to tell voters that CEOs held back from expanding their businesses, fearful that out of the blue some crippling new rule would clobber their prospects. No expansion, no new jobs.

More importantly, Republicans need to lay out how the tax cuts have boosted incomes and hiring.

Astonishingly, even as consumer spending spikes higher and public sentiment improves – along with capital investment and job creation – Republicans have allowed House Minority Leader Nancy Pelosi, D-Calif., to control the conversation about the GOP tax cuts.

Pelosi has convinced the nation – and apparently some Republican candidates – that those tax cuts are not helping the middle class.

Politico reports that some endangered GOP candidates won’t back the newest tax cut measure being crafted by the House Ways and Means Committee. The proposals would help Americans put money away for retirement and, more importantly, make permanent the individual tax cuts contained in the Republican tax bill signed into law by President Trump.

Those are good things, but evidently some folks can’t sell constituents on the virtues of keeping more of their hard-earned money. Good grief.

Democrats are working to distract from the booming economy by undermining President Trump with alarming, incessant rumors of chaos in the White House.

Not a day goes by that The Washington Post or some other liberal news organization does not publish a headline like that one on the front page of The New York Times over the weekend: “Chaos May Offset Economy’s Surge, Costing the GOP.”

This is not accidental. Bob Woodward’s book “Fear” came out just in time for the midterms, stuffed with material insulting to President Trump, almost all of which was based on hearsay and nearly all of which has been denied by the people who supposedly made the remarks.

In quick order we were next fed the anonymous op-ed in The New York Times that doubled down on charges that the president is wayward and dangerous.

At the same time, there has been a continued narrative that respected members of the Trump team are on their way out the door, so frustrated are they with the president’s demeanor.

Chief of Staff John Kelly was rumored to be leaving, but then (surprise!) agreed to stay on. Now the spotlight is on Defense Secretary James Mattis. He, too, is rumored to have fallen out of the good graces of the president.

The onslaught has taken a toll. President Trump’s approval ratings have dipped modestly, which will not help GOP candidates, especially when Democrats (and some Republicans) are insisting the midterms are a referendum on the president.

The midterm elections, as always, will be decided by who shows up. Turnout is driven by fear and anger. Here Democrats have an advantage.

Convinced by Hillary Clinton herself that she was a victim of sexism, the Democratic National Committee, Russian President Vladimir Putin, then-FBI Director James Comey, President Obama, the media (!!) and other malicious influences, Democrats are furious that they lost the election.

They are also angry that, as President Obama so rightly observed, elections have consequences, such as allowing the party in charge to fill Supreme Court seats.

Democratic Party leaders have fastened onto the likely confirmation of Judge Brett Kavanaugh to frighten voters, promising his ascendance to the Supreme Court will spell the end of the Roe. V. Wade decision that legalized abortion nationwide, the end of worker and voter rights – indeed, the end of the world.

The GOP should not waste time countering such drivel; in their quest to sidetrack Kavanaugh’s confirmation, Democrats have embarrassed themselves.

But, Republicans need to scare voters too. They should remind Americans that the new progressive Democratic leadership has destroyed the party of Bill Clinton. The quest for single-payer health care, open borders, the elimination of the Immigration and Customs Enforcement (ICE) agency, guaranteed jobs and income – these are not popular or workable solutions to our nation’s challenges.

Republicans can also highlight that Tom Steyer is the single largest donor to Democrats in this cycle, pledging $120 million to help win the House – and that his biggest goal is to impeach President Trump.

More simply, Republicans need to ask Americans, to paraphrase President Reagan: Are you better off now than you were two years ago?

And then Republicans need to make it clear to voters that a Democratic takeover of Congress in the midterm elections would crush the good times.