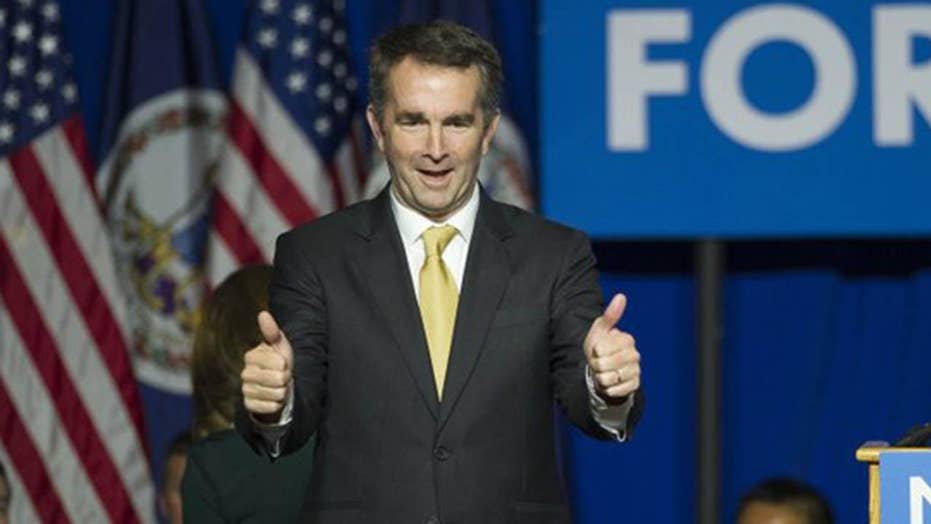 Media depict Northam win in Virginia as rejection of Trump

One of the few things journalists like more than pushing liberal agenda items like gun control and abortion is celebrating when Democrats win elections. One year after President Trump’s shocking upset victory, the media are still trying to overturn the result. That meant they had much to cheer when Democrats did well election night this week.

MSNBC’s Lawrence O’Donnell described the evening by saying “it feels like tonight’s history is being written by movie writers. It is so dramatic.” That was pretty much the attitude across news and entertainment media.

NBC’s “Today” host Matt Lauer called it a “stinging rebuke” for Trump. The network’s White House Correspondent Kristen Welker liked that term so much that she used it too, saying the election was “voters’ first strong rebuke of President Trump.”

Pretend-conservative Matthew Dowd, who is one of the most annoying people on TV, called it an election of “diversity and inclusion.”

Over at “The View,” (warning: watching too much could lower your IQ) co-host Joy Behar proclaimed: “It makes you feel better about the country today.” Certainly, if you are one of the hosts at “The View,” who are almost all laughably liberal.

Eight years earlier, when Democrats lost with Obama in office, the media sang a different tune.

Then-CNN White House Correspondent Suzanne Malveaux told “American Morning”: “It is not a referendum on this president.”

BET news host Jeff Johnson went on CNN’s “Larry King Live” noting the truth that such elections tend “to be a referendum against the ruling party.” That fact was certainly downplayed this week.

The Virginia governor’s race was marred by a racist and shockingly disingenuous ad by the Latino Victory Fund. The Washington Post editorial board pretended: “Virginia’s gubernatorial election Tuesday was a victory of decency, civility and moderation over fear, dread and barely veiled racist coding.”

But Latino Victory had released a commercial that depicted “supporters of Virginia Republican gubernatorial candidate Ed Gillespie as Confederacy-supporting, truck-driving racist murderers who attack minority children,” according to Real Clear Politics. ABC gave it 13 seconds of air time and The New York Times buried it in an article attacking GOP ads.

2. Media Still Can’t Cover Shootings: The Texas shooting was the story of a crazed atheist who killed 26 people and was stopped by an NRA-trained good guy with a gun who thanked God for his “skills.”

I bet you already know the punch line: That wasn’t how it was depicted in the press. Trump even made what CNN called “the 'good guy with a gun' argument,” which annoyed Editor-at-large  Chris Cillizza.

Sen. Ted Cruz, R-Texas, took a swing at the media over their coverage and summed things up nicely: “There is a reason why there is public distrust of the media, because the immediate focus is on a political agenda of gun control.”

And that was precisely what the media did, interspersed with absurd comments, such as USA Today’s bizarre and much-mocked claim that you can get a “chainsaw bayonet” on an AR-15. Apparently, this is a videogame attachment, so we know what USA Today staffers do during their spare time.

We also witnessed the very same media that had attacked Trump for politicizing the New York City terrorist attack turning around round and doing the exact same thing about Texas. But that was OK, it was a liberal agenda item.

There was ABC arguing for “extreme vetting on guns.” CNN’s nutty liberal host Don Lemon whined that “thoughts and prayers didn't” stop the attack. And CNN’s Alisyn Camerota said it was “absurd” that Trump was pushing “the same old NRA talking point" about the good guy with a gun. Apparently, she missed the memo about what actually happened in Texas.

3. An Actual Fish Story: Poor fishermen are notorious for exaggerating the size of the fish they catch. Now, it’s journalists, too. But journalists just make up their fish stories entirely.

Trump was in Japan to meet with Prime Minister Shinzo Abe and they went to a photo location to feed Koi fish. The next thing you know, Twitter and several media outlets were freaking out that Trump made a classic ugly American gaffe. Here’s CNN’s headline: “Trump feeds fish, winds up pouring entire box of food into koi pond.”

CNN’s Veronica Rocha took the Jayson Blair prize for most-manufactured news event. She wrote: “Then, with a look of enjoyment, Trump quickly poured his entire box of food into the pond.” Only, she admitted, after “Abe, who actually appeared to dump out his box of food ahead of Trump.”

In reality, the two leaders took turns feeding spoonfuls of food and then dumped the remainder – Abe first. But Rocha tweeted a GIF that cut Abe out so you couldn’t see him dumping first. It was all about Trump. CBS and NBC joined in with this embarrassment.

This is why ordinary Americans don’t and can’t trust traditional media.

4. Weinstein Story Ensnares Times: Kudos to The New Yorker for its piece on “Harvey Weinstein’s Army of Spies.” It showed the twisted ways in which Weinstein tried to stop his accusers. It was a top-notch story, but also exposed some difficult facts about the New York Times lawyer David Boies.

The Times described Boies as “a Democratic Party stalwart who argued for marriage equality at the Supreme Court and represented Al Gore in the disputed 2000 presidential election.” His firm, “Boies Schiller Flexner L.L.P., has provided The Times with outside legal counsel in three legal matters over the past 10 years, including one libel case,” it added.

Here’s The New Yorker’s description of the issue: “Boies personally signed the contract directing Black Cube to attempt to uncover information that would stop the publication of a Times story about Weinstein’s abuses, while his firm was also representing the Times, including in a libel case.”

The Times fired Boies. It called the investigations by Weinstein’s lawyers “reprehensible” and a “secret spying operation aimed at our reporting and our reporters.”

Hurray For Hollywood: It was a busy week for Tinseltown. Late-night host and new Democratic mouthpiece Jimmy Kimmel compared Trump’s election to O.J. Simpson not getting convicted of murder: “The closest thing I can compare it to is when O.J. got acquitted.”

The Country Music Awards joined in the Trump-bashing, with stars Brad Paisley and Carrie Underwood mocking the president, with Underwood commenting: “Maybe next time he’ll think before he tweets.”

TV shows were no different. The new “Dynasty” mocked both the president and vice president, including discussing a possible Trump divorce. ”South Park” depicted Trump as violent and abusive toward top Republicans.