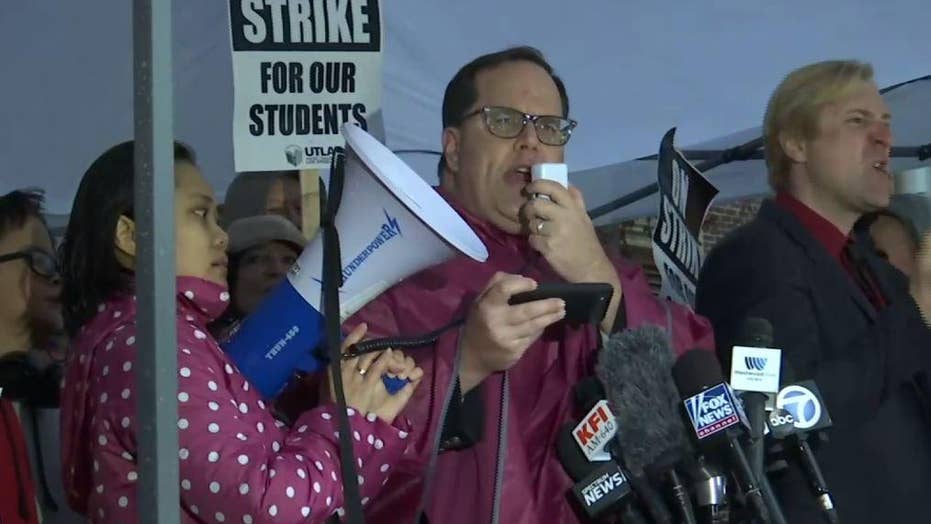 Los Angeles public-school teachers are on strike, here's what you need to know.

Teachers in Los Angeles public schools went on strike last week, holding 500,000 kids and their parents hostage as they demand more money for the lousy job their system does at providing an education.

The Los Angeles Unified School District (LAUSD) boasts of graduating about 80 percent of students.  But only 60 percent of those who graduated actually completed the necessary coursework, reflecting an unfortunate practice of passing students who don’t actually make the grade.

In 2017, only 40 percent of students in the school district met national standards for literacy.  Only an abysmal 30 percent met math standards.

IS THE LOS ANGELES TEACHER STRIKE REALLY ABOUT THE KIDS?

While the public school system claimed it “only” spent $12,073 per pupil in 2017, this number excludes the cost of buildings and other depreciable assets.  A study noted that were these expenses to be included, the per-pupil cost would more than double the official figure. In other words, the lousy education that Los Angeles public schools provides actually costs taxpayers more than sending students to most private schools. The problem isn’t money; it’s government incompetence.

Now the teachers’ union is demanding still more money even as the number of students instructors have to teach declines. The district has lost 245,000 students over the past fifteen years. As education researcher Lisa Snell of the Reason Foundation noted, “even as it was losing students, the number of total LAUSD employees grew by 5 percent over the last five years, primarily thanks to a nearly 16 percent increase in administrators.”  Snell also found that employee benefit costs increased 110 percent in just the last four years, and the school district’s long-term debt liability jumped from $8 billion in 2007 to a whopping $25 billion in 2017.

To the extent they are allowed, parents of LA’s kids are voting with their feet, opting in ever-larger numbers to send their kids to charter schools.  Some 138,000 Los Angeles students now attend charter schools, which deliver unambiguously better results. Naturally, the teachers’ union hates this competition.  In addition to seeking higher salaries as part of their strike demands, they also want more regulations to stifle the growth of charter schools.

Overall, the crisis is par for the course in California.  Government unions demand ever higher benefits, especially fat pensions that vastly exceed what is available to private sector workers.  Politicians who depend on votes and donations from the government unions are all too eager to say yes.

That is one reason why California has ended up with government debt that is at least $1.3 trillion and may actually be closer $2.3 trillion.  The state’s pension liability alone is $1 trillion. Plus California is still racking up new liabilities for pet projects like former Governor Jerry Brown’s $100 billion high-speed train to nowhere. The new governor, Gavin Newsome, has promised to provide health care for illegal immigrants, which won’t be cheap.  And yet with the nation’s highest top income tax rate, there are few feasible new sources of revenue.

The best solution for Los Angeles in this strike would be to emulate New Orleans, which when its public school system failed, decided to convert all its schools to charters.  Better still would be vouchers that allow students to attend private schools. Surely anyone who spends five minutes at the DMV or Post Office understands that the private sector does things better than government.  Education is no exception.  But don’t expect common sense to prevail in California.