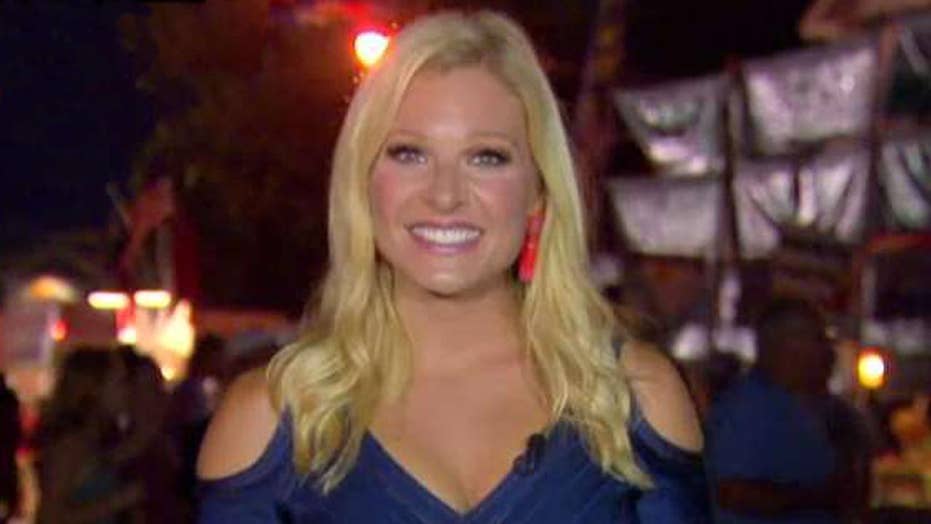 What being a 'Proud American' means to Anna Kooiman

What are you doing this Labor Day? Enjoying a few final dips in the neighborhood pool? Grilling out with friends? Similar to Memorial Day, many folks have associations with the holiday that are lovely, but may or may not resemble the holiday’s initial intended purpose.

Memorial Day has become the unofficial kickoff for summer, but was created to honor those who served and made the ultimate sacrifice in our armed forces. Labor Day honors American workers and their contributions to the U.S. economy. It dates back to the late 19th century and was initially celebrated with a parade in New York City involving the first unions.

Since Labor Day marks the end of summer in the U.S., I can’t help but think about my favorite summer memory, hosting the Fox News 2018 “Proud American” programming. I spent the week leading up to Independence Day asking folks what makes them proud to be an American. It was part of my assignment while gathering taped stories to air during our broadcast.

I chatted with veterans, active duty military members, and civilians alike. I spoke with parents, children, shop owners, and even our very own Fox News crew. Their answers varied greatly but I’ll bet several will resonate with you as much as they do with my own life experiences. Many of the answers had to do with the American Dream, working hard and getting ahead.

Our first broadcast location was Doumar’s, a Norfolk, Virginia restaurant that was once featured on “Diners, Drive-In’s, and Dives.” It is the home of the world’s first ice cream cone. The owner told me about how his great uncle came up with the dessert concept while at the World’s Fair in 1904.

The ice cream vendor had run out of cups and there was a waffle vendor next door. Mr. Doumar got creative – combined the two – and badda-bing-badda-boom: Look what we have now! Americans (and the rest of the world) are eating ice cream cones like it’s going out of style!

While conversing over ice cream cones and coffee (yes the two go together when you’re on morning TV) I spoke with two young sisters excited about their July 4th festivities, which would include a pool party and watching the fireworks with family. One of the girls was about to start her first job teaching swim lessons. She said she was proud to be an American because she was proud to be able to work and help others.

Our conversation reminded me of my first jobs at age 14 and 15 – ironically, scooping ice cream and teaching swim lessons. I thought about the work ethic my parents instilled in me from a young age.

“You work hard, you get ahead,” my parents told me. I still try to live by those words and it sounds like that young girl will too. 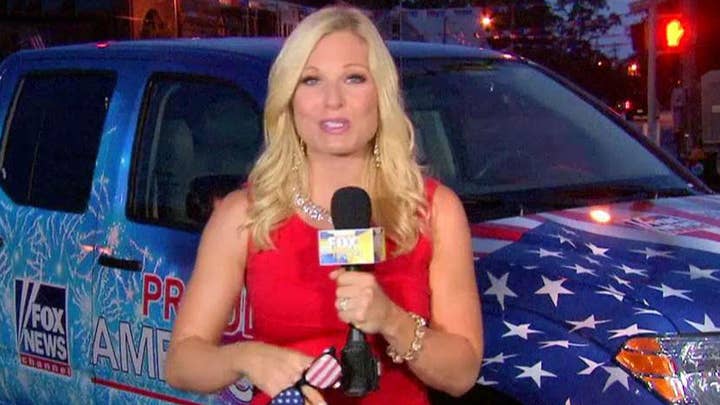 Fox News producers arranged for about 10 classic cars to be on location at the drive-in for our live shots. Most of the cars were owned by veterans. I spoke with male and female vets of all ages from the Army, Navy, Marines and Coast Guard. I enjoyed hearing them share their tough war stories while also reminiscing over fond memories made with their comrades.

When asking them what made them proud to be an American, one female classic car owner said simply, “the right to drive.” She went on to say that in some countries women are treated as second- or third-class citizens. Not here.

That woman’s answer may sound basic to some. Almost not even worth mentioning. But can you imagine what life would be like in countries, for example, that denied women are basic rights? We are blessed to be Americans.

The next day our crew was broadcasting live from Colonial Williamsburg. Our crew brushed up on our Founding Fathers’ history while I learned to shoot a musket, made a kitchen utensil with the local blacksmith, got fitted for an 18th century dress, and whipped up some colonial culinary delights.

One of the most memorable moments was when a man portraying Thomas Jefferson read the entire Declaration of Independence during a Facebook Live segment. In light of some current events, I brought up the ugliness we sometimes see from charged up individuals on both the left and right.

What would our Founding Fathers think about the way we live today? The actor portraying Thomas Jefferson reminded us of his tension-filled relationship with Alexander Hamilton. I think today we can look at history and remember that debate is healthy. But we shouldn’t let the level of discourse get so vicious and spiteful.

Particularly on patriotic holidays like Independence Day, my hope is that we can all be proud of our history – and proud of what our country aspires to achieve.

The big day of our “Proud American” coverage, July 4th, was so memorable. The majority of our live shots were from the USS Monterey, an active duty missile cruiser. It’s the ship that launched tomahawk missiles into Syria back in April, after dictator Bashar Assad used chemical weapons on his own people.

Another takeaway from my chats onboard the USS Monterey was that many of the young sailors in particular expressed how much it meant to them that their parents were pleased with their career choice to serve in the Navy. They also told me they felt like their service is something they will be proud to tell their kids about. I loved meeting so many sailors that day was sure to thank each and every one of them.

During one of our Facebook Live segments I was able to interview my parents (while holding my 5-month-old son) about what made them Proud Americans. My dad talked a bit about how privileged we are to have been born in America and it’s no wonder people spend their lives trying to get here. It’s the land of opportunity.

My mom talked a lot about the beauty and culture the U.S. has to offer. She and my dad recently retired and have been taking a lot of road trips. She said lyrics from “America the Beautiful” like “amber waves of grain and purple mountain majesties” are descriptions that ring very true.

Finally, I spoke with a few of our crew members about working on Independence Day. It can be tough on anyone to work holidays while family and friends are kicking it at the beach. But I heard the same sentiment from those crew members that I was feeling myself. We were enjoying our time so much that in many ways, it didn’t even feel like work.

Fox News does patriotic holidays right. I have a feeling you know exactly what I mean. We always find ways to tip our hats to military members, remember our nation’s history, and look toward a bright American future.

This Labor Day, I hope you are spending time with family and friends, relishing the summer memories you’ve made over the last few months, and are also taking a moment to think about how lucky we are as Americans. If we are willing to work hard, we can get ahead.

Anna Kooiman moved to Sydney, Australia in Septemer of 2016 to be with her Aussie husband's family. She is a Fox News freelance host and also appears on several national Australian TV networks. Kooiman is also the creator of an online fitness program and information resource, Strong Sexy Mammas. Follow her on Twitter @annakooiman, Instagram @annakooiman, and Facebook @AnnaKooimanTV. Visit her website www.annakooiman.com and StrongSexyMammas.com.