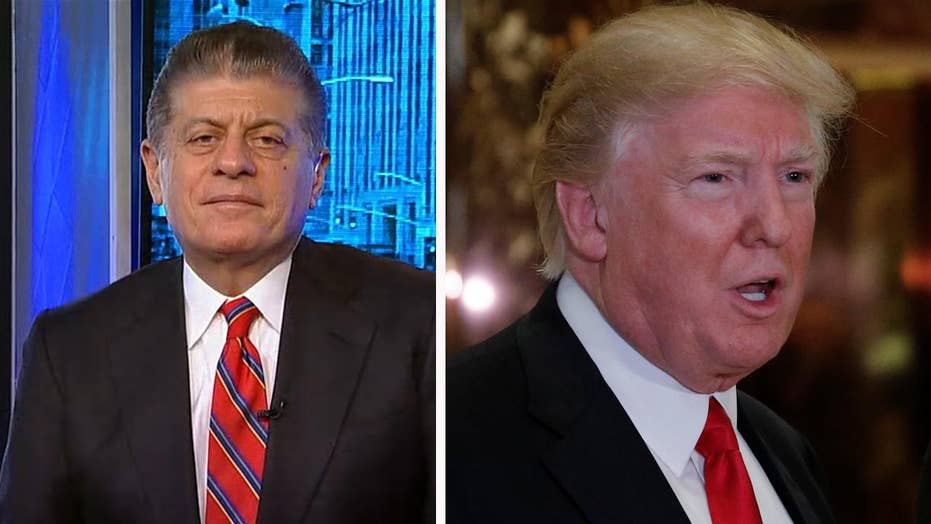 Napolitano: What is gained by boycotting the inauguration?

On Jan. 3, outgoing Attorney General Loretta Lynch secretly signed an order directing the National Security Agency -- America’s 60,000-person-strong domestic spying apparatus -- to make available raw spying data to all other federal intelligence agencies, which then can pass it on to their counterparts in foreign countries and in the 50 states upon request. She did so, she claimed, for administrative convenience. Yet in doing this, she violated basic constitutional principles that were erected centuries ago to prevent just what she did.

In the aftermath of former President Richard Nixon’s abusive utilization of the FBI and CIA to spy on his domestic political opponents in the 1960s and '70s -- and after Nixon had resigned from office in the wake of all that -- Congress passed the Foreign Intelligence Surveillance Act, which created a secret court that was charged with being the sole authority in America that can authorize domestic spying for non-law enforcement purposes.

The standard for a FISA court authorization was that the subject of the spying needed to be a foreign person in the United States who was an agent of a foreign power. It could be a foreign janitor in a foreign embassy, a foreign spy masquerading as a diplomat, even a foreign journalist working for a media outlet owned by a foreign government.

After the Foreign Intelligence Surveillance Act, numerous other statutes were enacted that made spying easier and that continued to erode the right to be left alone guaranteed by the Fourth Amendment.

The Patriot Act permitted FBI agents to write their own search warrants for business records (including medical, legal, postal and banking records), and amendments to FISA itself changed the wording from probable cause “of foreign agency” to probable cause of being “a foreign person” to all Americans who may “communicate with a foreign person.”

As if Americans were children, Congress made those sleight-of-hand changes with no hoopla and little serious debate. Our very elected representatives -- who took an oath to preserve, protect and defend the Constitution -- instead perverted it.

The recent USA Freedom Act permits the NSA to ask the FISA court for a search warrant for any person -- named or unnamed -- based on the standard of “governmental need.” One FISA court-issued warrant I saw authorized the surveillance of all 115 million domestic customers of Verizon. The governmental need standard is no standard at all, as the government will always claim that what it wants, it needs.

All these statutes and unauthorized spying practices have brought us to where we were on Jan. 2 -- namely, with the NSA having a standard operating procedure of capturing every keystroke on every computer and mobile device, every telephone conversation on every landline and cellphone, and all domestic electronic traffic -- including medical, legal and banking records -- of every person in America 24/7, without knowing of or showing any wrongdoing on the part of those spied upon.

The NSA can use data from your cellphone to learn where you are, and it can utilize your cellphone as a listening device to hear your in-person conversations, even if you have turned it off -- that is, if you still have one of the older phones that can be turned off.

Notwithstanding all of the above gross violations of personal liberty and constitutional norms, the NSA traditionally kept its data -- if printed, enough to fill the Library of Congress every year -- to itself. So if an agency such as the FBI or the DEA or the New Jersey State Police, for example, wanted any of the data acquired by the NSA for law enforcement purposes, it needed to get a search warrant from a federal judge based on the constitutional standard of “probable cause of crime.”

Now, because of the Lynch secret order, revealed by The New York Times late last week, the NSA may share any of its data with any other intelligence agency or law enforcement agency that has an intelligence arm based on -- you guessed it -- the non-standard of governmental need.

So President Barack Obama, in the death throes of his time in the White House, has delivered perhaps his harshest blow to constitutional freedom by permitting his attorney general to circumvent the Fourth Amendment, thereby enabling people in law enforcement to get whatever they want about whomever they wish without a showing of probable cause of crime as the Fourth Amendment requires. That amendment expressly forbids the use of general warrants -- search where you wish and seize what you find -- and they had never been a lawful tool of law enforcement until Lynch's order.

Down the slope we have come, with the destruction of liberty in the name of safety by elected and appointed government officials. At a time when the constitutionally recognized right to privacy was in its infancy, Justice Louis Brandeis warned all who love freedom about its slow demise. He wrote: “Experience should teach us to be most on our guard to protect liberty when the Government's purposes are beneficent. Men born to freedom are naturally alert to repel invasion of their liberty by evil-minded rulers. The greatest dangers to liberty lurk in insidious encroachment by men of zeal, well meaning but without understanding.”

Someday we will learn why Obama did this. I hope that when we do, it is at a time when we still have personal liberty in a free society.