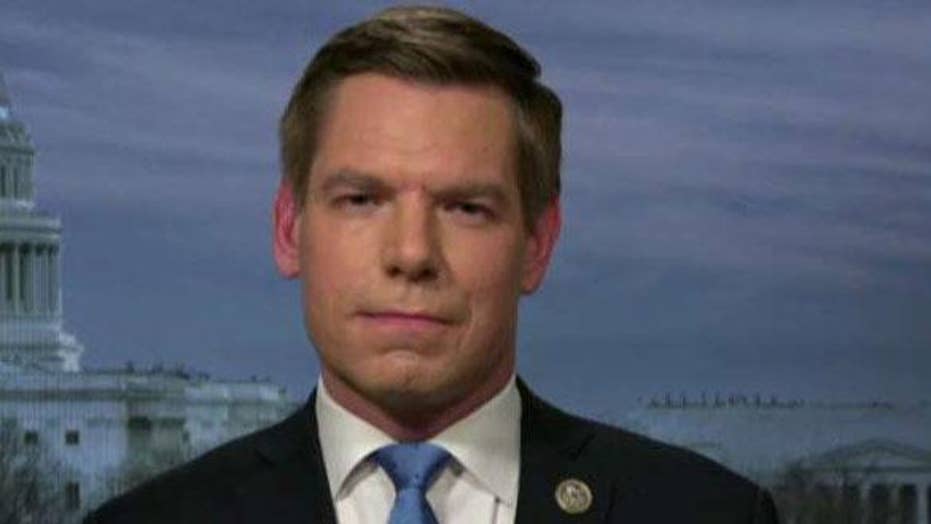 I’m confident that if there were another jihadist attack, Rep. Eric Swalwell, D-Calif., would be right there with his fellow Democrats, demanding more legal rights for enemy combatants while his fellow progressive lawyers queued up from Harvard Yard to Guantanamo Bay to volunteer their services to those who’d been detained. After all, as they’ve told us for years, due process for the enemy is part of “our values” – it’s “who we are.”

But how about due process for their political adversaries? On that, Swalwell’s interview last night by Fox’s Martha MacCallum is a useful marker of how lunatic Democrats have become in the Trump era.

The congressman was asked about the implications of Special Counsel Robert Mueller’s final report, which conclusively clears the president of “collusion” allegations first peddled by the Obama administration – allegations that, it is increasingly clear, were substantially based on a Clinton campaign opposition research document procured from a foreign operative and filled with sensational but unverified hearsay from anonymous foreign sources (purportedly including Russian officials).

ANDREW MCCARTHY: HOW LONG HAS MUELLER KNOWN THERE WAS NO TRUMP-RUSSIA COLLUSION?

Specifically, Swalwell was asked if he stood by his slanderous claim that the president of the United States is a “Russian agent,” made two months ago in an MSNBC interview with Chris Matthews. It is worth watching the clip, played during the MacCallum interview. Just to make sure everyone understood the gravity of what was being alleged, Matthews emphatically repeats the term “agent,” and Swalwell reaffirms that, yes, Trump is an agent of Russia.

Maintaining his smarm while trying to deflect MacCallum’s question, Swalwell played a couple of cutesy-pie lawyer games. First, he attempted to redefine “agent.” The sense manifestly conveyed by his original defamatory claim was “agent” as an espionage term-of-art, referring to a clandestine operative. Now, however, we are to understand the congressman meant it almost benignly: agency as in “just acting on someone’s behalf” – maybe coincidentally, perhaps not attuned to the elevation of Russia’s interests over America’s.

Second, asked about the dodgy dossier, Swalwell turned the tables and began to interrogate MacCallum rather than answer her questions. What part of the dossier, he demanded to know, had been disproved? (This echoed his risible explanation to Matthews that Trump was a Russian agent because Swalwell hadn’t “seen a single piece of evidence that he’s not.”)

It is good news for the White House and Republicans that Democrats continue doubling down on the indefensible. Two points, though, ought to be made here.

First, it is abundantly clear what Swalwell meant when he called Trump a Russian agent. At the time, the anti-Trump hopes for the Mueller probe were flying high, and the congressman was trying to be as razor’s edgy as possible. When Trump was being described as a Russian agent, just like when the Obama Justice Department and the FBI branded former Trump campaign adviser Carter Page a Russian agent, the term had a very specific meaning. A foreign agent is a person who knowingly engages in clandestine activities on behalf of a foreign power. Under our law, when the term is applied to an American citizen, “clandestine activities” means “activities [which] involve or are about to involve a violation of the criminal statutes of the United States.” (FISA, section 1801(b)(2) – Title 50, U.S. Code.)

The congressman was not accusing the president of the United States merely of “acting on Russia’s behalf” – it was not a matter of Trump happening to have the same position as Putin on NATO, as Swalwell ridiculously claimed last night (it would be truer to say that Putin and Obama had the same position on Iran, which never seemed to bother Swalwell). In calling Trump a Russian agent, Swalwell was effectively accusing the president of knowingly and secretly committing and planning to commit federal crimes in furtherance of Russia’s interests. Espionage, the patent suggestion in Swalwell’s accusation, is an egregious federal felony.

The Russian government is a murderous, anti-American regime – one of the most dangerous and capable in the world. If a president truly were a Russian agent, that president should not only be impeached and removed, but prosecuted and imprisoned. But to accuse a president of such a thing on scant evidence – actually, on partisan propaganda – is a disgrace. To persist in rationalizing the smear, now that it has been rejected after Mueller’s lengthy, thorough investigation, is inexcusable.

From their perspective, there are plenty of things, personal and policy-wise, over which Democrats can feel good about opposing President Trump, with all the dudgeon and hyperbole that stamp our politics. The “Russian agent” claim, however, is a slander. It is too bad that Swalwell can’t bring himself to apologize, but he should at least have the decency to retract it.

Second, as Swalwell would no doubt be the first to say if one of his own political allies was on the receiving end of libelous and criminal allegations, the burden of proof is on proponents of the dossier to prove the truth of its claims. In this country, you are not supposed to be able to make scandalous assertions and then dare skeptics to disprove them. The side relying on the claims has to verify them – particularly if the claims are used to obtain judicial warrants to spy and seize property.

It could be that I am just put off by the “I’m a totally reasonable, bipartisan kinda guy” veneer Swalwell assumes as he says totally unreasonable, rabidly partisan things. But it was tough to take his condescension when MacCallum tried to answer his challenge to refute the dossier. (I note in passing that Swalwell couldn’t even get his set-up question right. Obviously meaning to ask MacCallum what part of the dossier had been disproved, Swalwell asked MacCallum, “Which part of it hasn’t been proved factual?” Of course, virtually none of its significant allegations has been proved factual.)

MacCallum contended that, for example, the Michael Cohen Prague trip had been disproved. Oh, the congressman gleefully responded, well, if we believe Cohen about that, then we must also believe Cohen when he said Roger Stone gave Trump a heads-up that WikiLeaks was about to publish Democratic party emails. Mind you, (a) Mueller apparently believed Cohen on Prague but doubted him on Stone (neither allegation appears in the special counsel’s many charging documents); and (b) House Democrats recently invited Cohen to testify at a hearing and, notwithstanding his multiple fraud and false statements convictions, repeatedly vouched for him. Perhaps Swalwell, who was a county district attorney for just a short time, was never trusted with a case involving a witness who lies about some things and tells the truth about others – though it is standard fare for prosecutors (and in everyday life).

But the point is, it was for those who proffered the dossier to verify the key “collusion” claim that Cohen was in Prague. It is not the burden of dossier naysayers to negate the allegation. And it is perfectly reasonable for naysayers to rely on a denial that Cohen has corroborated with his passport (which indicates no travel to the Czech Republic), coupled with the fact that if Cohen was in Prague when the dossier says he was, that would have been easy to verify. Swalwell can keep pretending that the dossier, which even Steele won’t stand behind, is not a laughingstock, but it is he who looks absurd.

As a lawyer, Congressman Swalwell ought to be embarrassed. Alas, that doesn’t appear to be in his repertoire.