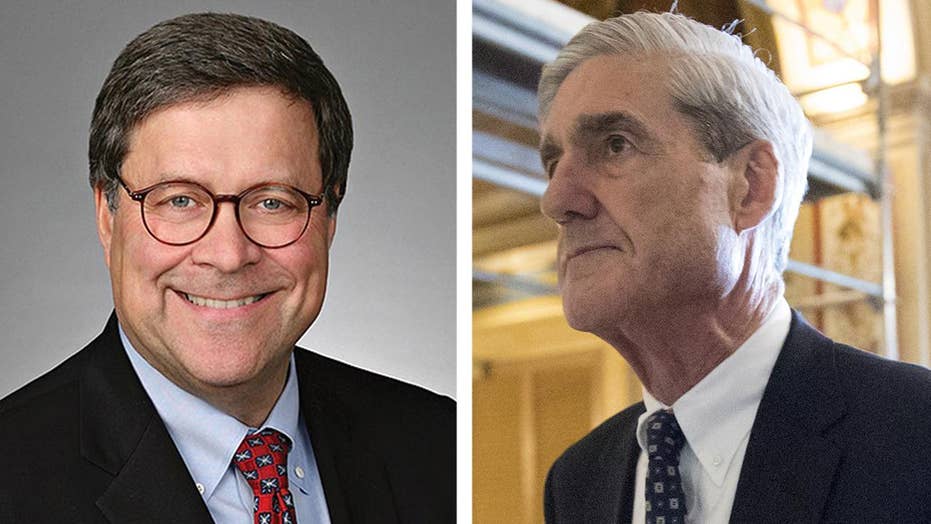 Could Barr-led DOJ rein in the Mueller investigation?

In his capacity as a former U.S. attorney general, William P. Barr, President Bush’s nominee to resume that position, wrote an unsolicited memorandum to top Justice Department officials expressing concerns about the obstruction aspect of Special Counsel Robert Mueller’s investigation. As I’ve explained at National Review, the Barr memo is a brilliant piece of legal craftsmanship, thoughtfully outlining the damage Mueller’s theory of obstruction – to the extent it is publicly known – could do to the administration of justice and the institution of the presidency.

In it, Barr acknowledges that he is not privy to the non-public facts of Mueller’s probe has uncovered. He does not prejudge Mueller’s conclusions or question the legitimacy of his investigation. Indeed, he posits that what Mueller finds on the issue of suspected (but unproven) Trump campaign “collusion” with Russia could be critical to the question whether there could be a legitimate obstruction.

Moreover, Barr does not doubt that a president theoretically could be guilty of obstruction. Citing the Nixon and Clinton precedents, Barr observes that a president who engaged in obstructive conduct as that term has always been understood in American jurisprudence and Justice Department practice – corrupt actions to tamper with witnesses and physical evidence – could certainly be cited for obstruction.

The issue addressed in the memo is Mueller’s expansive theory of obstruction. As Barr understands it, based on public reporting, the special counsel assumes the president’s lawful exercise of his constitutional prerogatives – e.g., to fire subordinate executive officials, to issue pardons, or to weigh in on the merits of an investigation – could be grounds for an obstruction charge if a prosecutor assessed the action to be improperly motivated.

As Barr correctly points out, this interpretation of the law would not only impair the president’s capacity to carry out his Article II duties. It would apply to every subordinate executive official, including Justice Department prosecutors. They would face potential prosecution based on charging decisions they make, the strategic manner in which they guide investigations, the tactics they choose to use or forbear from using, as well as personnel and management decisions.

Moreover, Barr makes an incisive point about cohesion in a free, self-determining society. If a Justice Department investigation is going to be responsible for removing a democratically-elected president, then it must be over a clear, egregious crime. A prosecution based on an aggressive, dubious theory of obstruction, particularly if no underlying “collusion” crime can be proved, would leave much of the nation believing the political class was arbitrarily seeking to oust a president not to its liking.

Coverage of the memo is likely to reignite public debate over Special Counsel Mueller’s request that President Trump submit to an interview. In the memo, which is dated June 8, 2018, Barr argued that “Mueller should not be permitted to demand that the President submit to interrogation about alleged obstruction.” Of course, in the months since the memo was sent to the Justice Department, the president’s lawyers negotiated an agreement with Mueller’s prosecutors, pursuant to which the president provided written answers to various questions, mainly about the “collusion” aspect of the investigation.

Barr’s position on this point is entirely correct. As I’ve contended for months (based on nearly 20 years’ experience as a Justice Department prosecutor), a prosecutor does not get to subpoena the president just because it might be interesting. The president’s duties are unparalleled in their centrality to American governance. Consequently, the Justice Department normally would not permit a prosecutor to divert the president from those duties and attempt to compel him to answer questions in the absence of: (a) a serious crime in which the president is clearly implicated, and (b) the existence of critical evidence or testimony that the prosecutor can only get from the president – i.e., no other source is available.

To argue, as some do, that this puts the president above the law is nonsense. What it means is that a prosecutor does have the power to issue a grand jury subpoena to the president, but only after we’ve balanced competing public interests: the vital interest in enabling the president to tend to his responsibilities, and the important interest in providing essential evidence in the investigation of a serious crime. We do not spare the president, but we heed his weighty duties. The same reasoning undergirds the Justice Department’s long-held guidance that a sitting president may not be indicted – no one is saying a president can never be indicted; we simply do not want the president dealing with criminal process while he is responsible for national security and the execution of the laws.

This is obvious to people when an issue arises about whether a journalist or an attorney should be subpoenaed. Unlike the president, journalists do not have a legally recognized privilege to withhold information; attorneys do have such a privilege, but like executive privilege, it is not absolute – there are important exceptions. In the Justice Department, a prosecutor may not issue a subpoena to a journalist or lawyer as if he or she were just like any other potentially relevant witness. Main Justice instead enforces a rigorous process in which the prosecutor must demonstrate that the evidence is critical to an investigation and there is no other viable source for it. And even upon that showing, the Justice Department would not permit a subpoena to issue if it appeared, under the circumstances, that the constitutional and public interests at stake were not adequately protected.