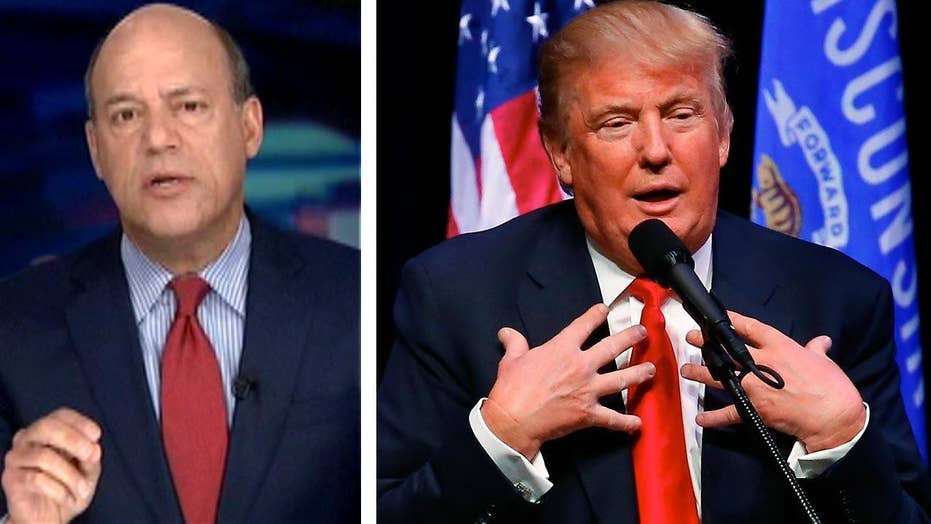 Advice to Trump: Things he should do after WI loss

Former White House press secretary Ari Fleischer says the WI primary loss is a sign 'The Donald's' sometimes=abrasive style is beginning to catch up to him. He tells 'On the Record' 5 things Trump needs to do to rebound and win over the GOP

Based on the possibility that you will become the nominee of the Republican Party, and perhaps the  president of the United States, I offer you the following thoughts on what you need to do as this unusual primary season approaches its homestretch.

I do this out of dedication to my country and Party.  I want Republicans to win the presidency and I am worried about the harm that will be done if Secretary Hillary Clinton becomes president.

Your loss in Wisconsin on Tuesday is a sign that your style of campaigning is catching up to you.

You have done a powerful job of energizing some 35 to 40 percent of Republican primary voters and you have made the Republican Party more attractive to lower-income, working Americans who typically question whether the GOP cares about them.  But getting to 50 percent is your problem and many of your recent statements and tweets are driving away the people you need to close the deal.

If you want to close the gap and win a majority of the Party, you need to:

1. Stop fighting with everyone and don’t be so nasty.  When you tweet unflattering pictures of Senator Cruz’s wife and threaten to “spill the beans” about her, question Ben Carson’s faith, offer to pay the legal bills of those who engage in violence, fault POWs, or accuse President Bush of being a liar, you push away voters you need to get to 50 percent.  If you keep acting like this, you will keep your 40 percent -- they love it – but you’ll never hit 50 percent.  It’s too hot, too much, too often.  Pick smarter fights and do so in a less belittling and pejorative manner.  You can make provocative points and be true to yourself if you would only be smarter about how and when you fight.

2. Get your facts right.  Think about how much stronger you would be if you supported your statements with accurate facts or anecdotes.  If you had said “a small group” of Muslims cheered from rooftops in New Jersey on September 11th, no one could have faulted you.  Same thing when you say we “send nothing” to Japan, or when you misstate the trade deficit with China. You often fudge up your poll numbers too.  You regularly show that facts are malleable to you, and that raises doubts about your substantive knowledge on all sorts of matters.

3. Learn more policy.  Your comments about abortion were a double-edged disaster.  You alienated everyone.  They showed you are not familiar with the background of an important emotional issue.  Anyone aware of Right to Life’s thinking knows, mothers are not criminals.  You need to take the time to learn a variety of issues. You might think everyone in Washington is stupid, but there are a lot of smart people in that town who actually care about issues and you should find the ones you trust and listen to them. No one expects you to memorize arcane policy points.  But it will be harder for you to reach 50 percent if voters think you can’t demonstrate sufficient knowledge to sit in the Oval Office.

4. Make policy announcements.  You’re an outsider with business experience and people want to hear what you would do if elected, beyond building a wall.  On energy policy, corporate welfare, agriculture policy and dozens of other matters, you would surprise people and grow your support if you gave a small number of actual policy addresses.  The point will be less what you say about each specific matter (so long as you demonstrate some level of fluency and expertise) and more that you’re capable of doing it.  Some one-third of the Party supports you because they think you’re tough.  You would make inroads with other voters if they thought you were thoughtful.

5. Stop citing polls.  Politicians who talk about polls do so to show the election is all about them.  But elections are not about politicians.  Elections are about the hopes and dreams of the voters and especially now, voters want someone who can lift up our country, defend us, and grow the economy.  I get that you talk about the polls to show you’re a winner.  But if and when you start losing more contests, the polls will define you as a loser. What will you talk about then?  It’s better to knock it off now.  And of course, all the recent polls show you are losing to Hillary.

You got yourself to where you are today by demonstrating an uncanny, powerful, outsider’s bravado.  But the gap between 40 percent and 50 percent support is immense.  The higher hanging fruit is tough to get, and you won’t likely earn that support if you stay on your current path.

The Super Tuesday news conference you held at Mar-A-Lago and your policy speech (on a TelePrompter) to AIPAC were your two best moments demonstrating there is more to you than bravado.

Whatever you do, just remember, you can’t win if you can’t earn a majority.