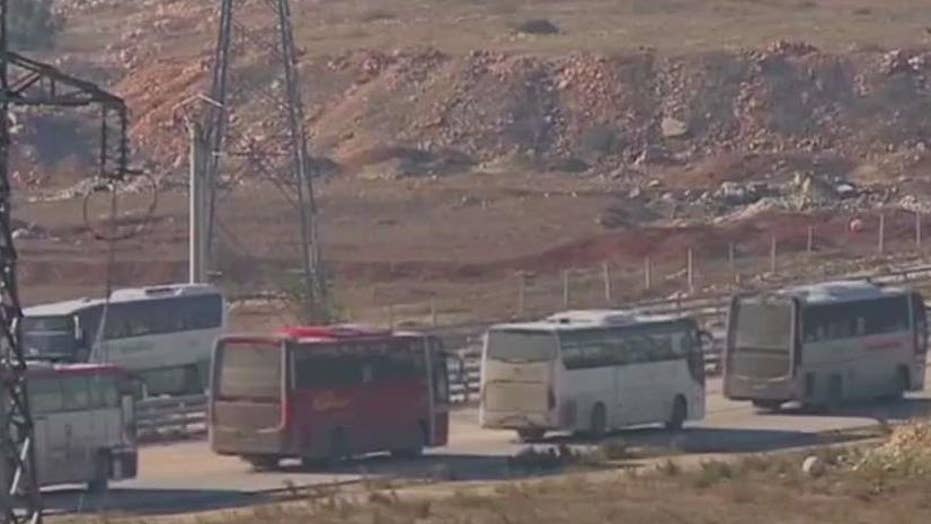 A patchwork of Iranian-led militias fighting for Syrian president Bashar al Assad is completing its brutal conquest of northerly Aleppo City, near the Turkish border. American policymakers have now begun to speculate –hope is more accurate-that perhaps the Syrian civil war is effectively over, except for the ugly mopping up. They are wrong.

Aleppo is a turning point in the war, but it does not decrease the necessity, long avoided by the Obama administration, for the U.S. to act.

Surviving anti-Assad forces in Syria will not surrender simply because Aleppo has fallen. Some fighters will abandon the battlefield; many will be killed or disappear into Assad’s prisons. But most surviving anti-Assad combatants will continue to fight-- as ISIS’s recapture of Palmyra further to the east, demonstrates.

The more realistic analysis of the rapid fall of Aleppo in the past few weeks is that rather than fight a losing battle in the city, many groups have decided to preserve their resources for what comes next.

In southern Syria, anti-Assad opposition remains strong and committed to fighting him despite the relative quiet of that battlefront in recent months. And in northern Syria, surviving anti-Assad fighters still have two options.

First, they can join a relatively new coalition on the battlefield organized by neighboring Turkey.  Turkey is giving priority to fighting Kurdish forces, including some backed by the United States, as well as fighting ISIS. Many of Aleppo’s rebels will be willing to accept these short-term delays in their war against Assad in return for Turkish backing that will allow them to survive and fight Assad another day.

Second, the opposition can join with al Qaeda and its Syrian jihadist ally, Ahrar al Sham. These extremist groups are consolidating and preparing to supplant the original goals of the Syrian rebellion – a negotiated settlement of the war, a release of political prisoners, and the departure of Assad – with a global jihad.

The size of the combined jihadist force is at least 20,000 fighters, greater than the most recent estimates of ISIS’s numbers across both Syria and Iraq. They will hold a defensive line for now, but will launch an offensive of their own once they have collected enough strength.

The jihadist groups’ next target will most likely be Hama City, about 75 miles south of Aleppo. Hama has symbolic value as the site of a historic massacre of Muslim Brotherhood members and civilians by Bashar al Assad’s father, Hafez, in 1982.

Pro-Assad forces cannot eliminate either al Qaeda or ISIS, even after their success in Aleppo. The main reason is that Assad’s only truly effective fighting forces are not his own but those his external backers, Iran and Russia, have provided or supported.

Even then, Assad barely succeeded in Aleppo. Iran’s militia forces took thousands of casualties. They only won because of the unique military pressure they could bring, through aerial attacks and artillery fire, on the civilian population inside already-destroyed urban terrain, and because anti-Assad fighters chose not to fight for each city block.

The pro-Assad alliance cannot replicate these conditions in the Syrian countryside. Iran and Russia may continue to reinforce Assad with ground forces in the near term, but they cannot provide enough troops to reconquer western Syria.

They may succeed, although jihadists will fight hard to prevent the advance.  Assad likely will also finish consolidating his grip on the Syrian capital of Damascus, whose countryside has been an opposition stronghold.

Neither the Chechen nor Iranian reinforcements are suitable long term holding forces, however. The pro-Assad alliance will continue to grandstand internationally to create the appearance of an end to the war but anti-Assad groups will persist and regenerate.

As the conflict continues to drag on past his inauguration day, then-President Trump must avoid the temptation to stay away entirely from Syria. He must also avoid the trap of reaching automatically for new partners without considering who can actually help us pursue our interests.

These interests are going to include defending ourselves against jihadist attacks, but also preventing further expansion of an Iranian- and Russian backed sphere of influence that threatens world order.

Any U.S. policy in Syria must weigh all of these considerations and recognize that America is the only country that can pursue American interests. There is no easy out, as our passive policymakers may now be dreaming.

It would be a moral, strategic, and logical failure of epic proportions to place our bets on Assad’s house of cards simply because we are too afraid to develop a strategy of our own.

Jennifer Cafarella is Lead Intelligence Planner at the Institute for the Study of War. She is the co-author of "Jabhat alNusra and ISIS:  Sources of Strength" (February 2016) and "Syrian Armed Opposition Forces in Aleppo" (February 2016), as well as the author of “Jabhat al-Nusra in Syria: An Islamic Emirate for al-Qaeda” (December 2014).