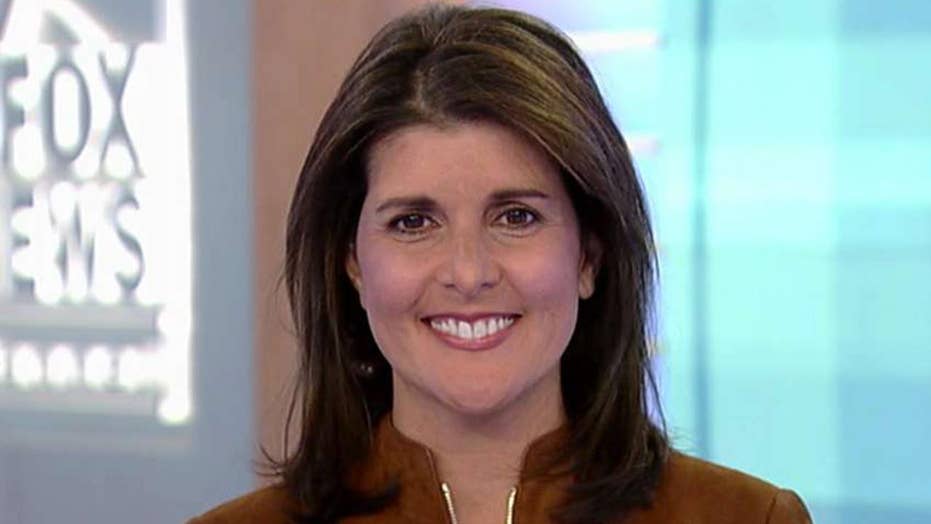 Outgoing U.S. Ambassador to the U.N. Nikki Haley reflects on her time working at the United Nations and her relationship with President Trump.

In December 2017, President Donald Trump courageously announced that the United States would officially recognize the truth that Jerusalem is the capital of Israel, and that we would move our embassy in Israel to Jerusalem.

Shortly afterward, the United Nations General Assembly gathered to give its opinion on this sovereign U.S. decision. Before the vote, as America’s UN Ambassador, I warned that the American people would “take names” of who was with us and who was against us.

A large majority of countries voted against America that day. There was no immediate consequence for doing so. But that doesn’t mean we didn’t take names. For countries who consistently trash America at the United Nations, there must be consequences, or there will be no changes in their behavior.

In fact, I did more than take names. My team at the U.S. Mission to the UN compiled an exhaustive research book on every country. We looked at how much foreign aid we give to each country, and how often they vote against us in the UN. The results were eye-opening.

I presented the findings to President Trump and he was shocked. So much so that in last year’s State of the Union Address, he referred to this huge gap between what we give to countries and how they treat us in return, saying, “That is why, tonight, I am asking Congress to pass legislation to help ensure American foreign assistance dollars always serve American interests, and only go to America’s friends.”

I could not agree more. Let’s look at two examples.

In 2017, Pakistan received nearly $1 billion in U.S. foreign aid, the sixth most of any country. Much of the aid went to the Pakistani military. Some went for road, highway and energy projects to assist the Pakistani people.

It is more than fair to ask what the U.S. gets in return for our generosity. On all key votes at the UN, Pakistan opposed the American position 76 percent of the time. Much more troubling, Pakistan also has a long history of harboring terrorists who have killed U.S. troops in Afghanistan.

Our foreign aid policies are stuck in the past and often operate on auto-pilot without considering the conduct of the countries who receive our aid.

That same year, U.S. taxpayers provided over half a billion dollars to the people and government of South Africa. That’s more than what the entire UN system provided to South Africa that year.

Most of our funds go to a great program for preventing HIV/AIDS. Over the years, we have literally saved the lives of millions of South African citizens. Americans do this because we are a big-hearted nation and it is the right thing to do, not because we expect something in return.

Still, you would think a government that received such life-saving assistance would show some gratitude for our generosity. You would be wrong. South Africa voted against the U.S. position at the United Nations 82 percent of the time – among the worst in the world. What’s more, it is an extremely hostile voice against many critical U.S. interests.

There are many other similar examples.

Congress failed to pass the legislation the president asked for last year, but the administration went ahead with its own full-scale review of U.S. foreign assistance policies. That review, which I participated in before leaving office in January, is long overdue. The administration has already wisely restricted assistance to Pakistan, but there is much more to be done.

Our foreign aid policies are stuck in the past and often operate on auto-pilot without considering the conduct of the countries who receive our aid. The national security bureaucracy is also very dug-in defending the foreign aid programs they administer. But the administration is proceeding. I hope it comes out with its changes soon and strongly.

UN votes should not be the only factor we consider in our foreign aid decisions. We have many humanitarian, economic, diplomatic and military interests that must be weighed. But UN votes should be one factor. If they are not, we will consistently underperform what we are capable of at the UN.

None other than former Secretary of State John Kerry said this about foreign aid: “Foreign assistance is not a giveaway. It’s not charity. It is an investment in a strong America and in a free world. Foreign assistance lifts other people up and then reinforces their willingness to link arms with us in common endeavors.”

I agree. And when foreign aid goes to countries that take our generosity and bite our hand, rather than link up arms with us, it’s time to stop it.