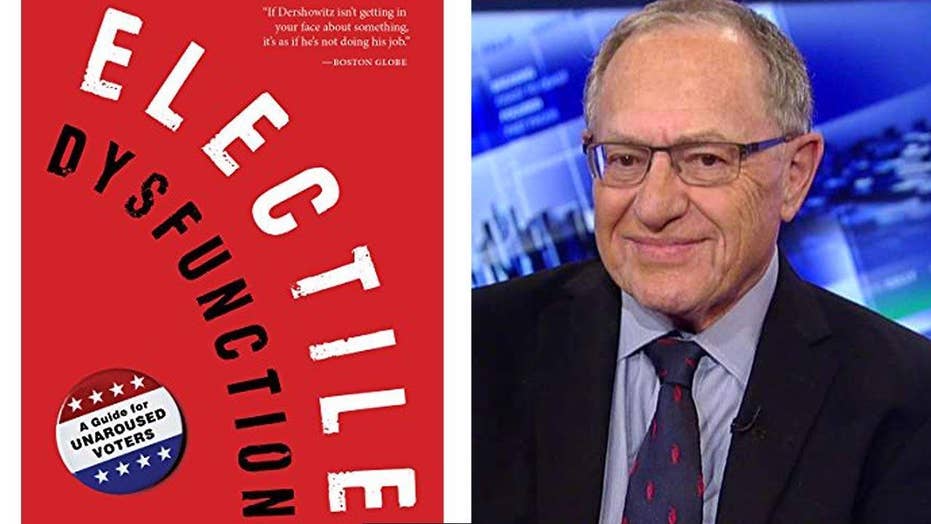 Harvard Law professor goes on 'The Kelly File' to react to the latest hearing on Hillary's server; discuss new book

This is the strangest presidential election in my memory. Despite the polls, the outcome is utterly unpredictable. This was true even before Hillary Clinton’s recent health issue. Just consider this: it was only a month ago that the Washington Post declared a landslide victory for Hillary Clinton,

On August 24, Slate – a liberal online magazine owned by the Washington Post similarly declared, “There is no horse race: it’s Clinton by a mile, with Trump praying for black swans” -- only to “predict” one week later “Trump-Clinton Probably Won’t be A Landslide.”

A few days ago, in a desperate attempt to analyze the new polls showing Trump closing in on Clinton, Slate explained sheepishly “Things realistically couldn’t have gotten much worse for Trump than they were a few weeks ago, and so it’s not a shock that they instead have gotten a little better of late.” Some current polls even show Trump with a slight lead.

The reality is that polling is incapable of accurately predicting the outcome of elections like this one, where so many voters are angry, resentful, emotional, negative, and frightened.

In my new book, “Electile Dysfunction: A Guide for the Unaroused Voter,” I discuss in detail why so many voters now say they won’t vote at all, or will vote for a third-party candidate. As the New York Times reported, “only 9 percent of America chose Trump and Clinton as the Nominees.” Or to put the voter’s frustration with the candidates more starkly, “81 percent of Americans say they would feel afraid following the election of one of the two politicians.”

Despite their perceived lack of agency, these voters may, of course, end up voting for one of the two major candidates when Election Day comes around.

This may depend in part on whether the Johnson-Weld ticket does well enough in the polls to be included in the presidential and vice presidential debates.

The rules require that a third-party candidate reach 15 percent in five national polls. This number is difficult to achieve because many of the polls do not include third-party candidates. But it is not impossible, and if it were to occur, and if the Johnson-Weld ticket outperformed or held its own against Clinton and Trump, then people who had decided not to vote or who couldn’t make up their minds might cast ballots for the Libertarian candidates.

It is unlikely that the Stein/Baraka ticket will be included in the debates or that it will garner any significant number of voters in key states because the candidates are so extreme in their views and so out of the mainstream of American political beliefs.

However, if a significant number of voters do vote for a third or fourth party, this could impact the election, as the votes for Ralph Nader in 2000 may have determined the Florida outcome, which in turn determined the general election outcome.

The bottom line is that in a bizarre election like this one—with so many variables and so much emotion—polls may well under -- or over -- predict votes for the two major candidates.

Both Brexit and this presidential election involve raw emotion, populism, anger, nationalism, class division, and other factors that distort accuracy in polling.

Anyone who thinks they know who will be the next president of the United States is deceiving themselves!

To be sure, the Electoral College vote is sometimes less difficult to predict than the popular vote, because it generally turns on a handful of closely contested critical states, such as Ohio, Florida, Pennsylvania, and Virginia. But in this election, there could be surprises in states that are usually secure for one party or the other. So even the electoral vote will be more difficult to predict than in previous elections.

No one really knows what he will say or do between now and the election. His position on important issues may change. Live televised debates will not allow him to rely on a TelePrompter, as he largely did in his acceptance speech or in his speech during his visit to Mexico City.

He may once again become a loose cannon.  No one can predict what he will say or do next. This may gain him votes, or it may lose him votes. Just remember: few, if any, pundits accurately predicted how far Trump would get when he first entered the race.

When it comes to Donald Trump, the science of polling seems inadequate to the task.

Hillary Clinton is more predictable, but her past actions may produce unpredictable results, as they did when FBI director Comey characterized her conduct with regard to her emails as “extremely careless.”

It is also possible that more damaging information about her private email server or the Clinton Foundation may come from WikiLeaks or other such sources (whether these “revelations” are actually incriminating seems to be beside the point for those 54 percent of voters who, without first-hand knowledge of the investigation, suspect that the FBI engaged in a preferential treatment by not seeking criminal charges against Clinton.)

Finally, it is difficult to assess what impact, if any, her recent health issues may have on voters.

Another unpredictable factor that may impact the election is whether there are terrorist attacks in the lead-up to the voting. Islamic extremists would almost certainly like to see Trump beat Clinton, because they believe a Trump presidency would result in the kind of instability on which they thrive.

If ISIS attacks American targets in late October, that could turn some undecided voters in favor of the candidate who says he will do anything to stop terrorism.

If voters were to change their votes based on terrorist acts, that would only encourage more terrorism in the run-up to elections.

A final reason why this election is so unpredictable is because the voter turnout is unpredictable. The “Bernie or bust” crowd is threatening to stay home or vote for the Green Party.

Young voters may do here what they did in Great Britain: many failed to vote in the Brexit referendum and then regretted their inaction when it became clear that if they had voted in the same proportion as older voters, Brexit would likely have been defeated.

Some Clinton supporters worry that black voters who voted in large numbers for Barack Obama may cast fewer votes for Clinton in this election.

Voters who usually vote Republican but can’t bring themselves to pull the lever for Trump may decide to stay home.

So, for all these reasons and others, no one can tell how this election will turn out.

It would be a real tragedy and an insult to democracy if the election were to be decided by those who fail to vote, rather than by those who come out to vote for or against one of the two major candidates.