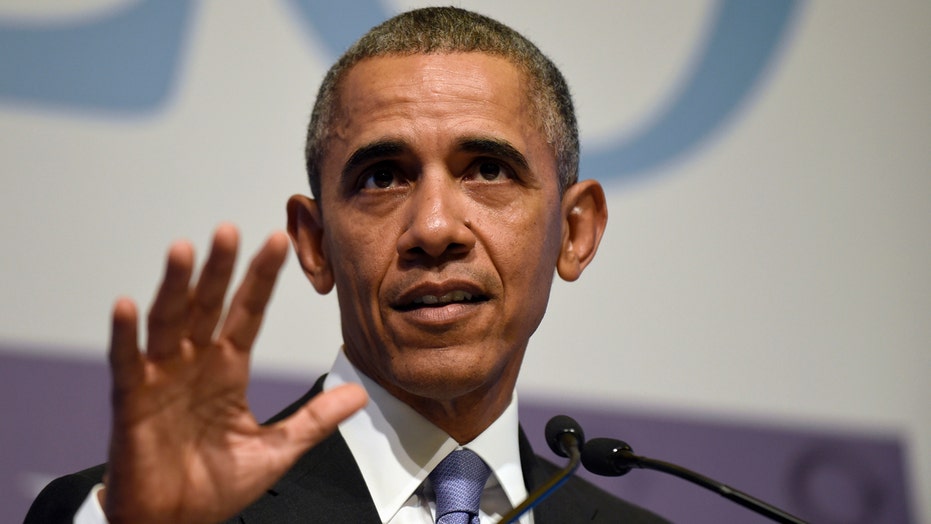 While Paris was still reeling under a state of emergency, President Obama took to the stage at the G-20 conference in Turkey to declare his policy to defeat ISIS a success. He had no plans to change course and no time to deal with critics who disagreed. Just days after ISIS ratcheted up their ambitions to conduct mass casualty attacks against the West, the president persisted in claiming his policy was working. President Obama continues to show a stunning and willful blindness to the tragedies all around him.

Meanwhile, the Russians and the French have started fighting back, launching airstrikes against the ISIS capital. As the days go on, more and more nations feel radical Islam’s sting and struggle with how to respond. The world is screaming out for U.S. leadership, but the president just isn’t up to the job.

It is slowly dawning on the West that radical Islam is the existential threat of our times, as fascism was in World War II, as communism was in the Cold War. We can’t cooperate with it, we can’t convert it and we can’t contain it. We must defeat it.

But so far we have no Churchill or FDR, no Reagan or Thatcher or Pope John Paul II. Obama has made it abundantly clear that he’s not budging. He says the U.S. will not send troops into the region, and he uses that as an excuse to do nothing. He says critics have suggested things he’s already doing. He says if anybody has a better plan, he hasn’t seen it.

To defeat radical Islam, the United States should bring together all of Western civilization, combining our economic, political, ideological and diplomatic weapons, our intelligence and cyber capabilities, and our armed forces. No one country acting alone can defeat radical Islam. Everyone has his own role to play. But it won’t happen without America taking the lead.

Mr. President, here is what a better plan looks like. It’s the same plan that won World War II and the Cold War. The U.S. led in both victories, and the U.S. is the only country than can lead this time.  Those victories were multifaceted and multinational.

To defeat radical Islam, the United States should bring together all of Western civilization, combining our economic, political, ideological and diplomatic weapons, our intelligence and cyber capabilities, and our armed forces. No one country acting alone can defeat radical Islam. Everyone has his own role to play. But it won’t happen without America taking the lead.

First, assemble an alliance of nations that are threatened by radical Islam. We may have to hold our noses and work with leaders and countries we have differences with, as we did with the USSR during World War II. But we can put aside those differences temporarily to deal with the immediate threat. Putin, Assad, even the hacktivist group Anonymous could play a role.

The president insists the U.S. won’t send ground forces back to the Middle East. But this is still a military campaign. There is collateral damage in war.  We can try to minimize it, but not at the expense of losing this war.

Second, cut off ISIS’ funding. Bomb their oil fields and refineries. Destroy the pipelines, trucks and tankers taking ISIS oil to market. Use the U.S. banking system to track and freeze ISIS’ assets and sanction any country and company doing business with them.

Third, get tough with our Arab allies. Many Gulf Arab states have wealthy citizens who support radical Islamist groups. Tell those leaders they should police their own and shut down the funding streams. If they don’t, we won’t lift a finger to help them when radical Islamist groups bring the fight to their lands.

Fourth, launch a propaganda war to win the hearts and minds of those whose minds are still open. Use social media for disinformation campaigns. Counter every ISIS video of beheadings with videos showing jihadists blown to bits. -- Showing terrorists committing unspeakable acts of violence doesn’t turn recruits off, it attracts them. The only way to discourage new followers is to show ISIS as weak, confused and in decline.

Fifth, encourage Islam’s leading clerics to speak out against the extremists.  Two of the most respected and important leaders in Islam, the Grand Imam of Al Azhar University and Cairo’s Grand Mutfi, have taken strong stands. We can help spread their messages.

Sixth, launch cyberwarfare against ISIS. Invade their safe havens on the Internet. Disrupt their networks. Radical Islam has dominated this space while we play catch-up.  Even worse, we have tried to conduct our efforts with one hand tied behind our back.

Seventh, arm our allies. We should give anyone willing to stand up and fight ISIS whatever he needs. Arm the Kurds and the Anbar Sunni tribes directly. Give weapons and aid to Jordan, Egypt and Israel.

Eighth, discard political correctness. We reacted to September 11 by treating everyone alike. The grandmother traveling with her grandkids to Disney World was given the same level of scrutiny as the young man with multiple visits to North Waziristan who traveled without luggage on a one-way ticket he paid for in cash. A better way to use our resources efficiently is to profile for terrorist behavior patterns. If we focus on everyone, we focus on no one.

Ninth, Don’t accept refugees we can’t vet. ISIS has already announced it will hide terrorists among the hordes of refugees flooding Europe and hoping to enter the U.S. The directors of the FBI, the CIA and the National Intelligence Agency have all issued warnings about the difficulty of vetting refugees headed for the U.S. Americans can help best by offering humanitarian assistance to keep refugees in the region, helping those of fighting age to stand and fight ISIS.

And finally, 10th, accept that we will constantly need to adapt our strategies and tactics to deal with radical Islamists. President George W. Bush tried to destroy radical Islam by sending in hundreds of thousands of troops to fight in Iraq, and failed. Obama tried withdrawing from the region, and that failed, too.

Yet the threat continues to grow. It has taken different forms over the years – Al Qaeda, ISIS, Boko Haram, al Nusra front – and it will no doubt wear other faces in the years ahead. But it’s the same enemy: religious fanatics driven by the core belief that they have been chosen by Allah to establish a caliphate that rules the world. They will kill any and all who stand in their way – Christians, Jews, Muslims – in the Middle East and worldwide.

Since they’re convinced they will prevail in the inevitable clash of civilizations, they’re not worried about the scope of the battle, or the levels of destruction, or even dying in the process. In fact, they are eager to bring on the end times, since they believe their triumph over the infidels is preordained.

We can laugh at the absurdity of their goals, or dismiss them as the “JV team,” or try to win their hearts and minds, or divert their anger with a jobs summit.

This is an enemy we can defeat. But our efforts need a leader. It can’t be Putin, and it can’t be Hollande. America is the only nation with the bandwidth, clout and power to assemble Western civilization and unite us in this long war.

Now all we need is a leader who is up to the task.