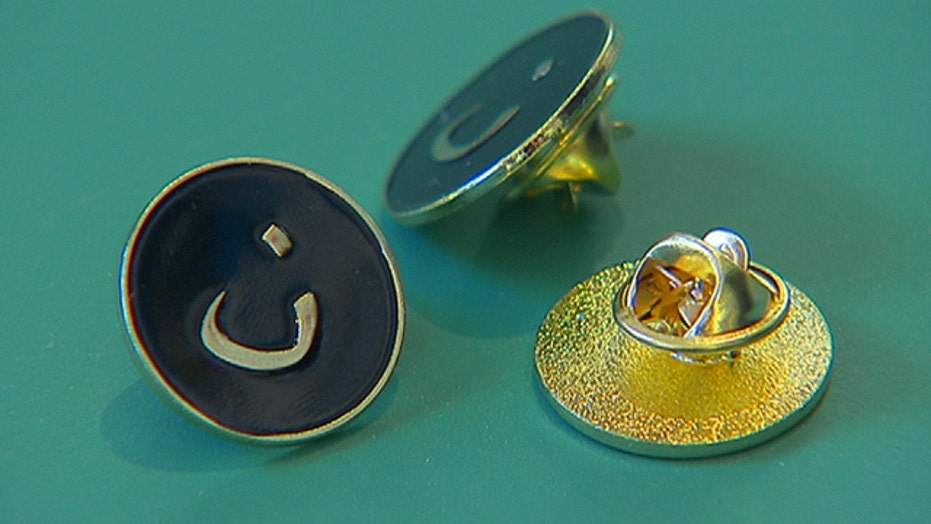 A symbol of hope for persecuted Christians

The Arabic letter for "N" is a tiny symbol that Islamic extremists use to mark the homes and businesses of Christians as a sign of contempt, much like the Nazis in World War II used the Star of David to identify Jews. But Father Benedict Kiely, a New England priest, has turned the Arabic N into a sign of hope, and given people here in the United States a way to stand with persecuted Christians who are being systematically exterminated or driven from the land of Jesus.

"So we're using this symbol, the Nasarene, to show the world that we're with our brothers and sisters and try to help them practically in some small way."

By all accounts, Father Benedict, a quiet man with a crisp English accent, has a dream parish. Nestled in one of the world's hottest winter playgrounds of Stowe, Vermont, mass at Blessed Sacrament on a Saturday afternoon seems more like après ski, than absolution, as skiers and snowboarders file in from the slopes.

"So we're using this symbol, the Nasarene, to show the world that we're with our brothers and sisters and try to help them practically in some small way."

But when the town of Mosul fell last summer into the hands of Islamic extremists, and Christian churches and homes were burned and destroyed and Christians themselves had to flee or be killed, Father Benedict says he felt helpless. He told Fox News, "It was so terrible to think that a place where Christians had been for 2,000 years, all driven out. And I was just thinking, 'What can I do? What can I do?'"

What he did was use the extremists' own weapon against them. The N that stands for Nasarean, marking followers of Jesus of Nazareth, as a sign of contempt, is now becoming a sign of solidarity and strength.

Father Benedict, together with three parishioners, took the Arabic N and created Nasarean.org. They attached the symbol to wristlets, lapel pins and car magnets, and are now selling the items to raise money and awareness.

"So we're using this symbol, the Nasarean, to show the world that we're with our brothers and sisters and try to help them practically in some small way."

Parishioner Esbert Cardenas's marketing company Image Outfitters, designed the items. Cardenas says that, "being that we're a socially responsible company it was a perfect fit. And we said 'okay, let's do this."

Parishioners Monica and John Clark package and ship the items out from their UPS store on Stowe's Main Street. "We're doing everything right at our costs, the labor, the packaging are donated. The only thing is the postage, the rest is coming from Monica and myself," Clark said.

The money raised from Nasarean.org, $35,000 so far, goes directly to a Christian charity in the Middle East called Aid to the Church in Need. It's a charity founded after World War II, that is on the front lines in the fight against religious persecution. The money will help build shelters and schools. The tiny symbol created here in Stowe, now connects Christians struggle to a global community.

"I've heard from many people, they are very happy we're doing this because they know that someone are about them," Father Benedict said. "We're identifying with them and showing solidarity with them."

What Father Benedict worries about most is that if the world doesn't stand up and help the Christians in the Middle East, the Christian culture will be gone. Even the Aramaic language, which is the language of Christ, still only spoken in Nineveh plain, will be no more.

His concerns are confirmed by Open Doors USA's latest report showing that persecution of Christians is at an all-time high. And, says The Hudson Institute's Nina Shea, "Christians are the most widely persecuted group in the world today."

Father Benedict says he's frustrated with our government and religious leaders, saying they need to do more to help the Christians and religious minorities in the Middle East. And he warns that if they don't get the help they need, the culture of Christianity will be gone from the land of its birth.